One of the often-requested features from NAS units that act as media servers is the ability to transcode existing videos to better fit the requirements of the playback device. The popularity of Plex Media Server (which uses ffmpeg for transcoding) amongst consumers is an indication of the market demand for this feature. SoC companies as well as NAS vendors have been trying to address this problem in multiple ways.

Back at CES 2012, I saw Applied Micro's PhiPhi transcoding NAS platform, where the NAS SoC talked to a dedicated Zenverge transcoding chip to achieve the requirements. Unfortunately, I believe the reference design was never taken up by any NAS vendor. In the meanwhile, they continued to take efforts to include the Plex Media Server as a package installable on the NAS.

Intel entered into the picture with their Evansport NAS platform in March 2012. Based on their Berryville STB SoC, it also happened to have a H.264 encoder in addition to a multi-format decoder (giving it the capability to act as a transcoder). We have been pretty bullish on Evansport, having reviewed devices from all of Intel's announced partners (Asustor, Synology and Thecus). While Asustor and Thecus focused on the decoder aspects only, Synology was the only one to utilize the unique hardware transcoding feature. 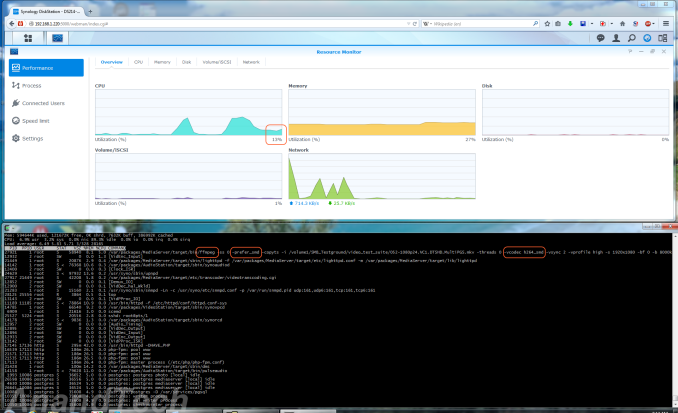 In order to utilize the transcoder block, Synology had to prepare a custom build of ffmpeg. Given that Intel hasn't announced any follow-ups to either Berryville or Evansport, it is not clear what the future of this series would be. In this situation, it was no surprise that the three partners had nothing new to announce in this lineup at either CES or Computex.

QNAP was one of the major NAS vendors who opted out of using Evansport. With the introduction of the TS-x51 series, I can clearly see why they decided to pass it up. One of the major reasons for Evansport's existence in addition to the regular Atom-based NAS units was the fact that a SoC configuration would reduce BOM cost for the vendors. With the Silvermont-based Atoms (which are SoCs), this advantage goes away. While Avoton and Rangeley are great for high-end SOHO / SMB NAS units as well as enterprise cold storage applications, certain consumer-focused aspects are absent. The most important amongst them are the multimedia focused features that Evansport provided. Obviously, cost is also a factor.

In our review of the DS214play, we had talked about how it would be better if Intel actually movied QuickSync over to the Berryville / Evansport follow-up. Instead of waiting for Intel to officially launch a storage platform (like they did for previous generation Atoms), QNAP has just gone forward and built a NAS family with the Bay Trail-D platform. At this point, QNAP's decision to skip Evansport in favour of devoting attention to Bay Trail-D seems to be making a lot of sense. 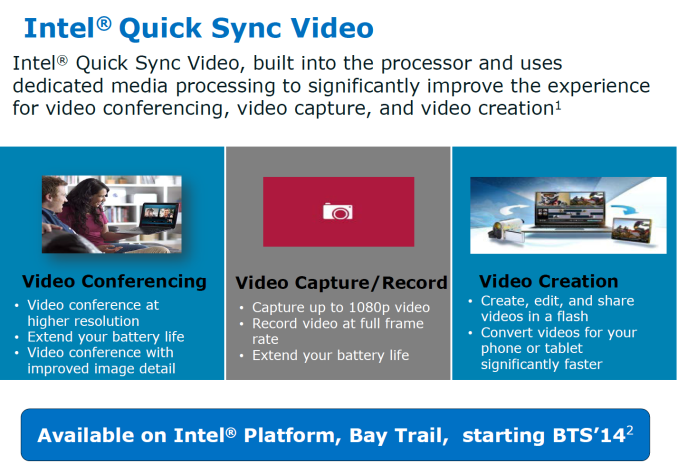 The Celeron J1800 is one of the first Bay Trail parts to come with Quick Sync, Intel's hardware H.264 encoder. QNAP's QTS OS is a Linux variant, and QNAP has decided to utilize the publicly available VA-APIs to access this Quick Sync engine.

When Intel introduced its Quick Sync engine back with Sandy Bridge in 2010, it was pitched as a solution for users needing to transcode videos in a fast manner (particularly for mobile devices which couldn't handle the bit-rate or file sizes of the original stream). Support was restricted to paid software (such as CyberLink MediaEspresso) for a long time. It was only last year that HandBrake, the popular open source transcoding application, got Quick Sync support. However, purists and videophiles often were content with spending extra CPU time to get better quality encodes using x264's advanced options (and two-pass feature).

Quick Sync did make other GPU vendors sit up and put in video encoders on their GPUs too. NVIDIA came out with NVENC and AMD put in VCE. While NVIDIA seemed to have found its niche with recording game play in real-time, VCE is yet to gain as much traction. In addition to HandBrake support, integration into open source screen recorders (such as CamStudio) would help drive up adoption of the Quick Sync encoder in the PC space. Currently, even though Quick Sync was originally meant to be used as a transcoder, I wouldn't be surprised if Eric Gur's Quick Sync decoder (which is part of LAV Filters) was found to be used by more consumers. In any case, most of the interesting open source applications utilizing the Quick Sync hardware features have been restricted to Windows.

On Linux, Intel contributes extensively to the VA-API open source library / API specifications for video processing. Despite not being specifically mentioned, the documentation (table reproduced below) suggests that VA-API's H.264 encode capabilities are tied to the presence of the Quick Sync engine in the processor.

Wowza is one of the commercial applications which takes advantage of the Quick Sync engine on Linux. Downloading the driver package makes it clear that VA-API is being utilized. In the TS-x51 series, QNAP takes advantage of Quick Sync in two ways. The user can pre-transcode video files into different resolutions (where the use-case is similar to Handbrake), but the killer method is real-time transcoding for streaming media (using its mobile app or to a DLNA renderer). 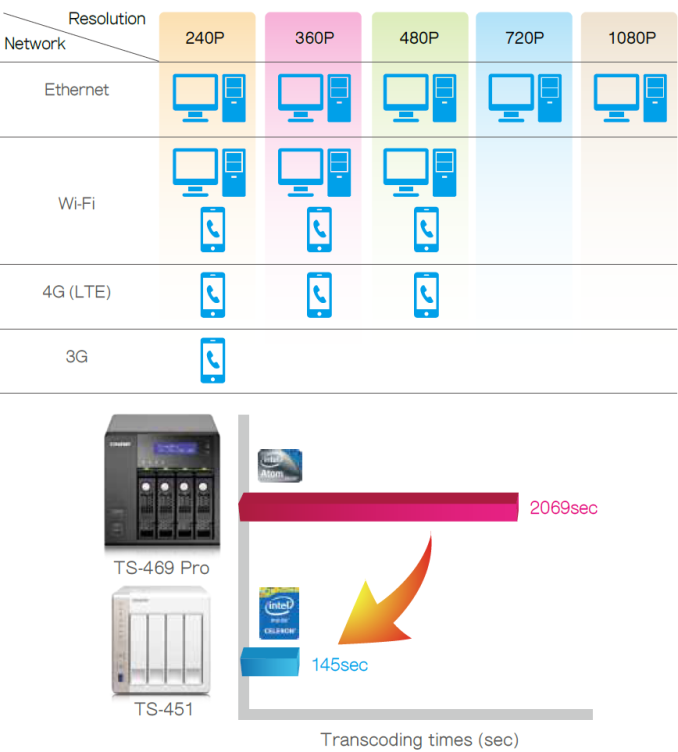 Consumers have long been clamouring for Plex to take advantage of the Quick Sync engine, but the developers have been quite hesitant - deciding to focus on being on as many platforms as possible, rather than optimizing for platforms on which Intel Quick Sync is available. The rapid rise in user-generated media and the evolution of the mobile lifestyle has brought to fore the necessity for low power real-time media transcoding. Quick Sync (particularly in low power SoCs such as the Bay Trail-D / -M) perfectly fits the bill and QNAP's efforts to harness this feature deserves recognition.