Unlike the 270X the 270 won’t have a reference design card, with every partner releasing their own custom design right off the bat. To that end we’ll be looking at a pair of retail 270 cards today, one from HIS and another from Asus. Our first card will be the HIS card, which as a reference clocked card will be our stand-in for the reference 270. 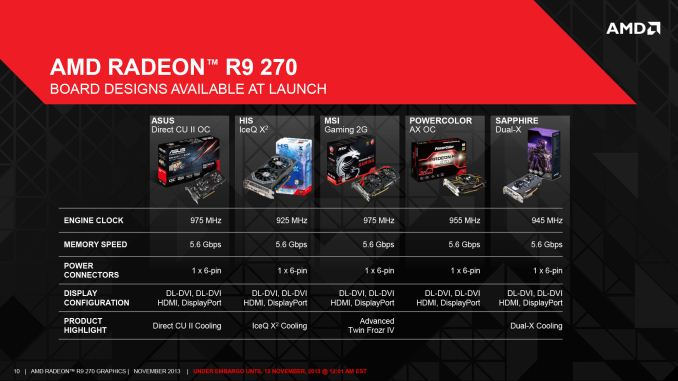 HIS’s 270 IceQ X2 is a typical design for the retail 270 cards we have seen thus far. Most cards will feature a dual fan open air cooler over a moderately sized heatsink, and that’s exactly what we’re looking at with HIS’s card. 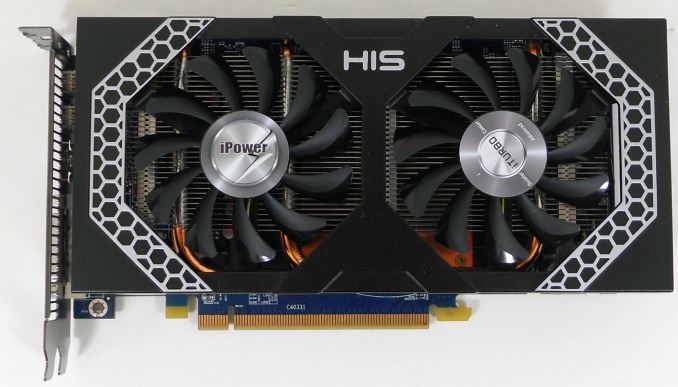 For their 270 HIS is using the smaller version of their IceQ X2 heatsink and fan unit. The smaller IceQ X2 utilizes a pair of fans mounted over an aluminum heatsink, with a trio of copper heatpipes providing a connection between the heatsink and the Pitcairn GPU underneath. There aren’t any baseplates or secondary heatsinks here, so cooling for the discrete electrical components and the RAM chips is provided solely via airflow coming off of the card’s fans.

With a PCB of 8” long and a combined card length of 8.3” long, the 270 IceQ X2 is the shorter of the two cards we’re looking at today. Though with the only points of contact between the cooler and the PCB being around the GPU, the card is still just long enough that we would have liked to see a stiffener or some other reinforcement mechanism on the PCB to keep the far end of the PCB from moving freely of the cooler.

As a 270 card one of the defining features will be the card’s power requirements, which at 150W means it needs only one PCIe power socket. For the IceQ X2 this is located at the far end of the PCB, orientated parallel to the PCB itself; so you’ll need a bit more room behind the card to work in the necessary power cabling.

Otherwise at the front end of the card we find a full slot vent, coupled with AMD’s last-generation I/O layout of 2x Mini DisplayPort, 1x HDMI, and 1x DL-DVI. This gives the 270 IceQ X2 more flexibility overall, but it means it won’t be able to natively drive a pair of DL-DVI monitors. This design also means that this is likely a reuse of an earlier HIS board, though we haven’t been able to identify the specific one.

Our second 270 for the day is Asus’s Radeon R 270 DirectCU II OC. This is a factory overclocked model, which is something several of AMD’s partners will be doing as part of their usual differentiation and value add strategies. 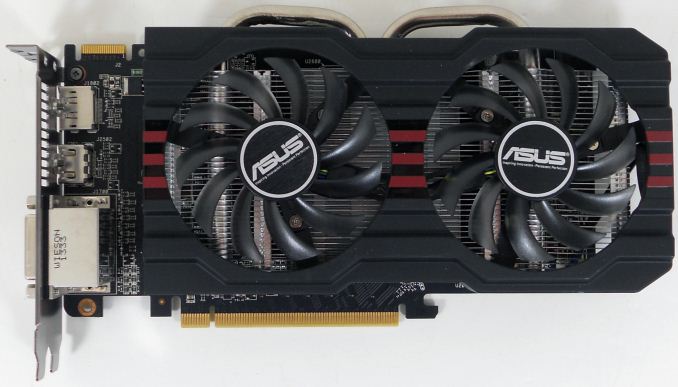 Like the HIS 270, Asus’s card is a dual fan open air design. Based on a smaller version of their DirectCU II cooler, Asus utilizes a pair of heatpipes running from the Pitcairn GPU to the card’s heatsink, which overruns the PCB itself just slightly. There aren’t any baseplates or secondary heatsinks here, so cooling for the discrete electrical components and the RAM chips is provided solely via airflow coming off of the card’s fans.

The total length of the Asus 270 is 9”, of which roughly half an inch is the cooler overhanging the PCB. Despite the longer PCB Asus isn’t using any kind of stiffener or other PCB reinforcement here either, so even more so than the HIS card, Asus could use a little more protection against PCB bending.

For Asus’s power connectivity, the single 6-pin PCIe power socket is found at the end of the card, orientated perpendicular to the PCB. This is the second Asus card where we’ve seen Asus reverse the PCIe power socket so that the tab on the plug faces inwards instead of outwards, which makes it easier to plug (and unplug) the card without having to deal with the cooler blocking the tab. At the same time since the Asus card is a bit longer than the HIS card, we’re glad to see they’re using a perpendicular orientation to best minimize the need for additional room for the power cable.

As for Asus’s display I/O, Asus is using the current generation AMD standard of 2x DL-DVI 1x HDMI, and 1x DisplayPort. This gives the Asus card the ability to drive two DL-DVI type displays at once, but it only leaves 1 DisplayPort for any flexible expansion.

Finally, on the software side of things the 270 comes with Asus’s standard GPUTweak software utility. GPUTweak is a very competent overclocking suite that offers all of the overclocking and monitoring functionality we’ve come to expect from a good overclocking utility, including a wide array of monitoring options and support for GPU voltage control. Asus’s taste in skins is unfortunate – a low contrast red on black – but otherwise the UI itself is similarly solid. To that end GPU Tweak won’t match Afterburner on some of its more fringe features such as recording and overlays, but as a pure overclocking utility it stands up rather nicely. 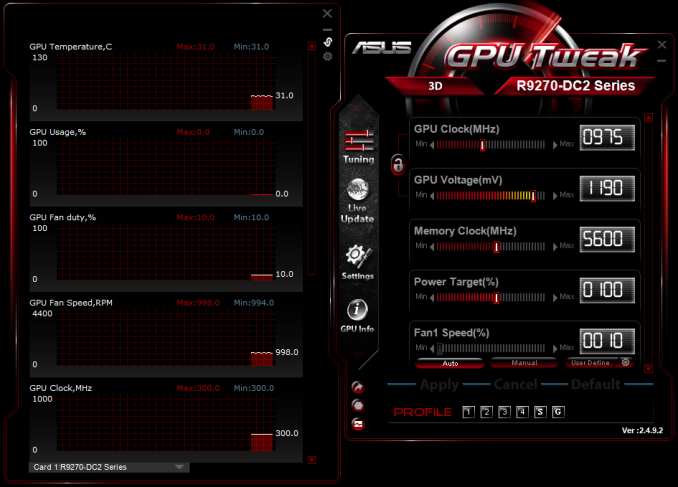