The Gigabyte Z77X-UD5H is the first Z77 motherboard we have tested that uses a full PCIe 3.0 tri-GPU setup, such that we have:

In our testing, we show that the first method of PCIe layout performs a lot better in tri-GPU setups.  Note that the downside of this is that if a Z77 motherboard is paired with a non PCIe 3.0 CPU (such as Sandy Bridge), then the final PCIe slot on the board is not functional.

Civilization V is a strategy video game that utilizes a significant number of the latest GPU features and software advances.  Using the in-game benchmark, we run Civilization V at 2560x1440 with full graphical settings, similar to Ryan in his GPU testing functionality.  Results reported by the benchmark are the total number of frames in sixty seconds, which we normalize to frames per second. 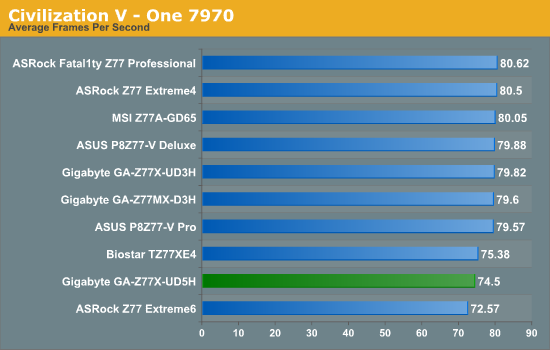 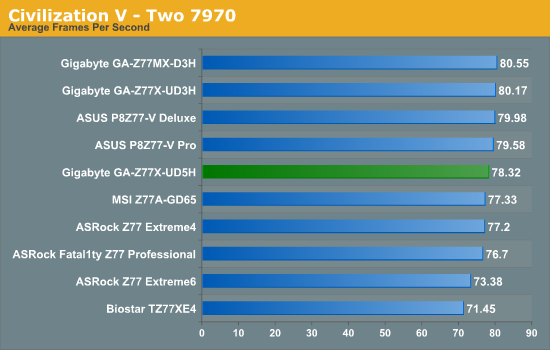 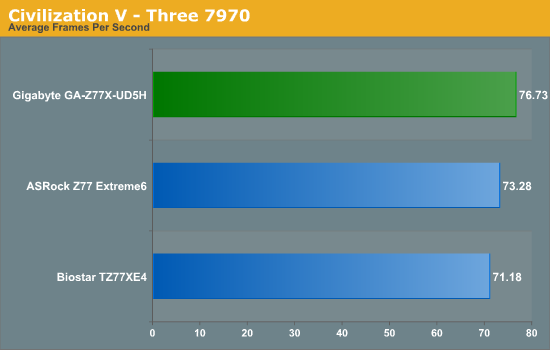 While the UD5H does not perform the best in single and dual AMD cards in Civilization V, it does take the top spot against our tri-AMD setup. 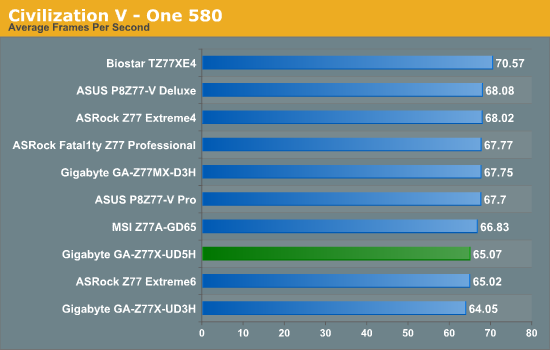 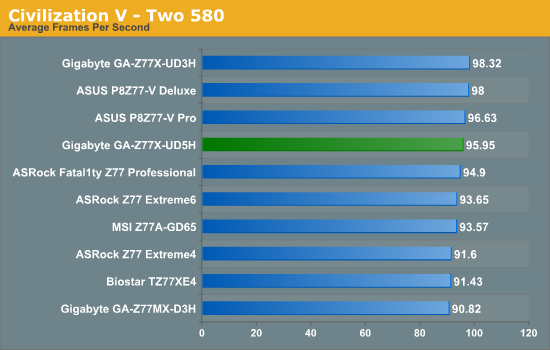 For whatever reason our single NVIDIA test does not perform that well, but the dual NVIDIA GPU test comes near the top.

Dirt 3 is a rallying video game and the third in the Dirt series of the Colin McRae Rally series, developed and published by Codemasters.  Using the in game benchmark, Dirt 3 is run at 2560x1440 with full graphical settings.  Results are reported as the average frame rate across four runs. 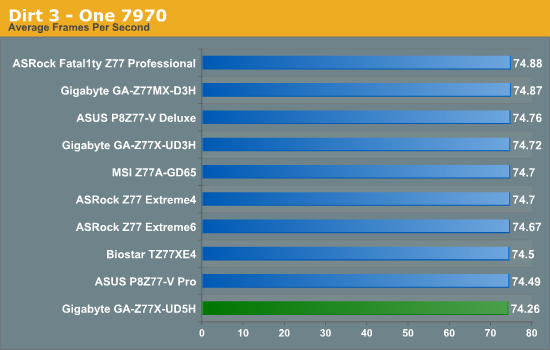 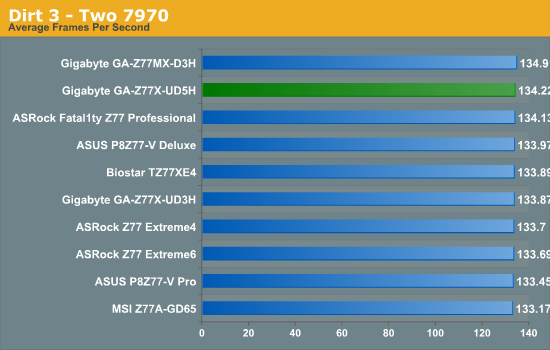 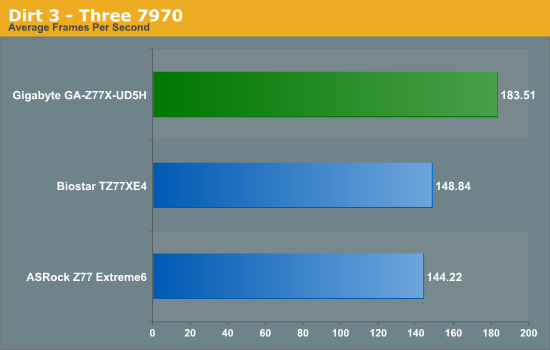 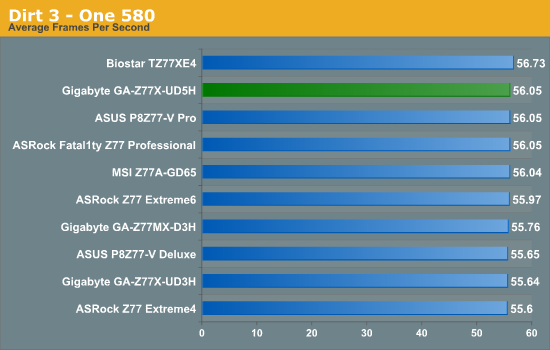 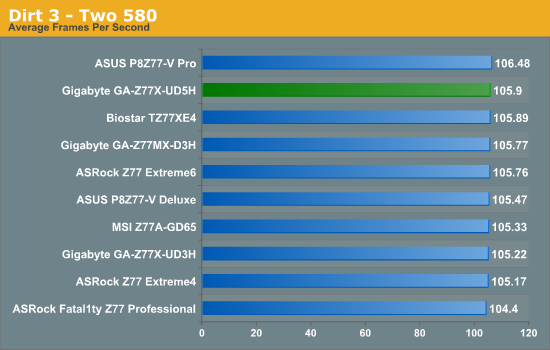 In both our Dirt3 NVIDIA tests, the Z77X-UD5H performs well but within statistical variance of every other board tested.

Metro2033 is a DX11 benchmark that challenges every system that tries to run it at any high-end settings.  Developed by 4A Games and released in March 2010, we use the inbuilt DirectX 11 Frontline benchmark to test the hardware at 2560x1440 with full graphical settings.  Results are given as the average frame rate from 10 runs. 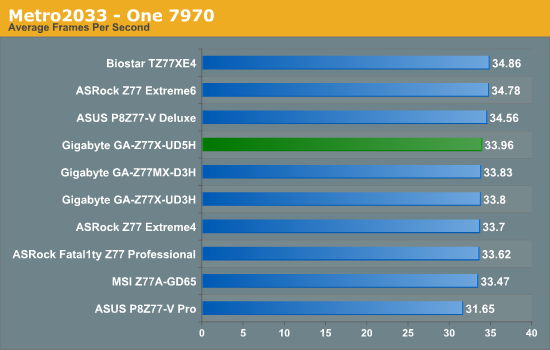 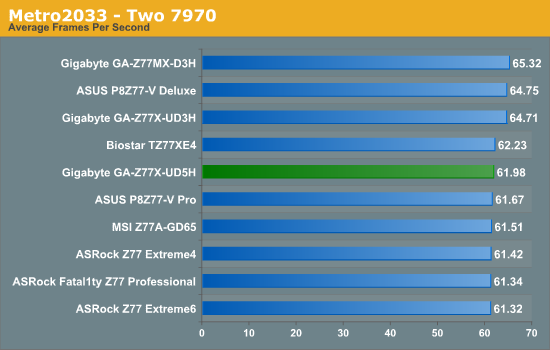 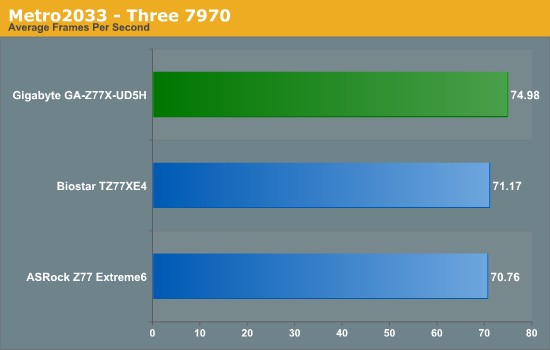 On our Metro 2033 tests, the full PCIe 3.0 functionality of the third GPU shows again, with the Z77X-UD5H performing another 5% better than the Biostar. 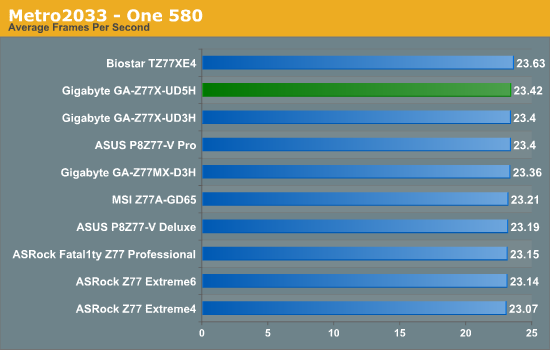 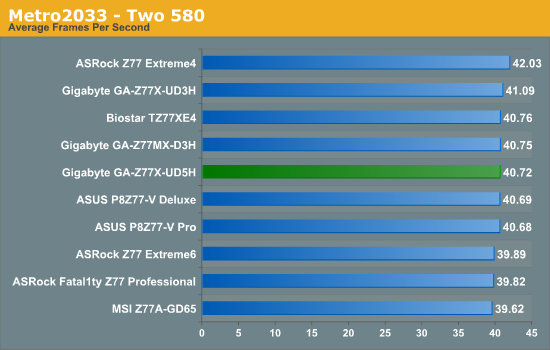 Our NVIDIA testing in Metro 2033 shows every board performing almost the same.