The Alpha PAL6035 is the successor of the famous PFH6035. Just like the P3125 and the P7125, it features a copper baseplate to help spread the heat across the base of the heatsink. The (FC-) PAL is produced using cold forging, a rather uncommon and expensive production method for heatsinks. It has 103 very fine hexagonal fins. 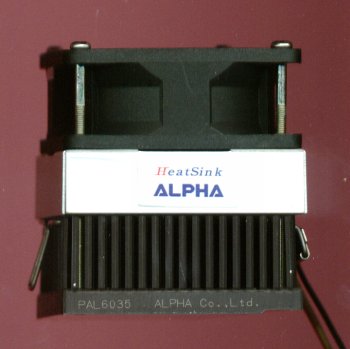 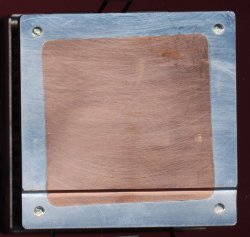 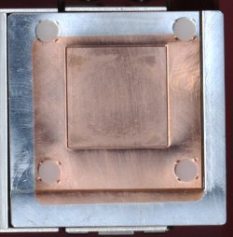 The older version PAL6035 is not Coppermine compatible; however the newer FC-PAL6035 is. The difference between PAL and FC-PAL is the base plate - on the left, you can see the PAL6035 base plate, on the right the FC-PAL / PEP66 base, with its little plastic feet. Of course the FC-PAL will also fit classic PPGA CPUs, so if you have the choice, go with the FC-PAL, as it's a safer investment. 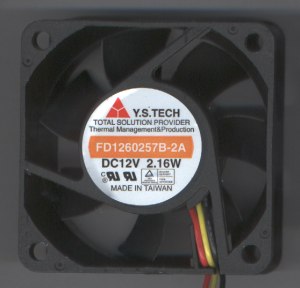 
The YS Tech 60x25mm fan specs, according to Global WIN, are 26CFM at 4200rpm +/-10%. That's a very high tolerance, +/-10% -- this tolerance is present not only in the specs but also in the actual product. Some of these fans spin at 4500rpm, whereas others spin at only 3900rpm. Nevertheless, the fans provide excellent performance, and according to a few heatsink retailers we questioned, they are also extremely reliable. The disadvantage is that they are very loud, especially the ones spinning at >4400rpm. Choosing a fan always means choosing between lower noise and better performance; the YS Tech fans are a good choice for those who find better performance more important.


Installation takes a lot more time with the PAL6035 than with other heatsinks. The heatsink comes in totally disassembled form, but with a small "manual" that explains installation. The clip is very good, it installs and uninstalls easily, and holds the heatsink firmly.

The FC-PAL6035 with YS Tech fans  is the top choice for overclockers who want good performance, but do not care about high noise and are willing to pay a relatively high price for a heatsink. But keep in mind that the FC-PAL6035 with Sanyo Denki fans will provide very similar performance with less noise. A problem with the FC-PAL6035 is that it is quite high, and depending on the motherboard, it will block up to two DIMM slots when it is installed on slotket. Therefore Alpha also offers the PEP66, which is better for slotket configurations.