Wrapping up the test results, we have the B+GR LED (i.e. WLED) backlit 1080p display. We can't comment on the standard 768p panel, but considering all the results we've seen on such panels to date it's hard to imagine Dell is going to have anything more than a mediocre, low-contrast offering. What they give users is the ability to upgrade to a substantially better 1080p display, and while it doesn't top the WUXGA RGB LED panel in the Dell Precision M6500, it also doesn't bump the price up $300. Actually, short of A/B side-by-side comparisons, we think most users will be very pleased with the 1080p upgrade. It took me all of five seconds after the initial power on to notice that the panel had a good contrast ratio, and colors in images look far better in my opinion than what you get with typical laptop LCDs.

Having used the Dell Studio XPS 16 for a while, I actually prefer the new panel design, but that's mostly because of the silliness of the old "Edge-to-Edge" display. The Studio XPS 16 had a glossy sheet of plastic that was placed over the LCD panel, and when closed the "LCD" rested against the keyboard and palm rest. The result is that the plastic sheet would accumulate smudges and other marks just through normal use over time (though I've heard if you could manage to remove the glossy sheet that the underlying panel was actually a matte display). In contrast, the LCD in the L501x is a traditional affair recessed into the cover slightly, so the only way it will get smudges is if you—or your friends/kids/spouse—touch it. So, the design is better but the panel itself might not be quite as good—more on this after the charts. 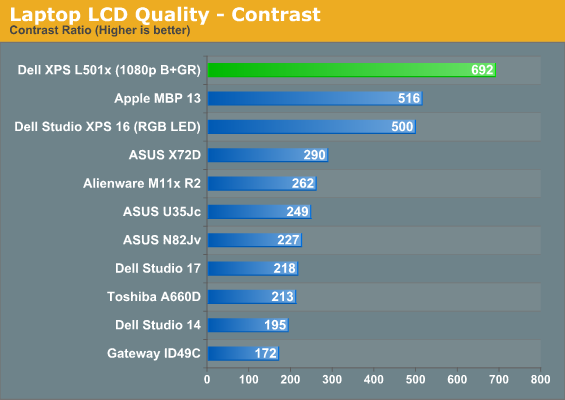 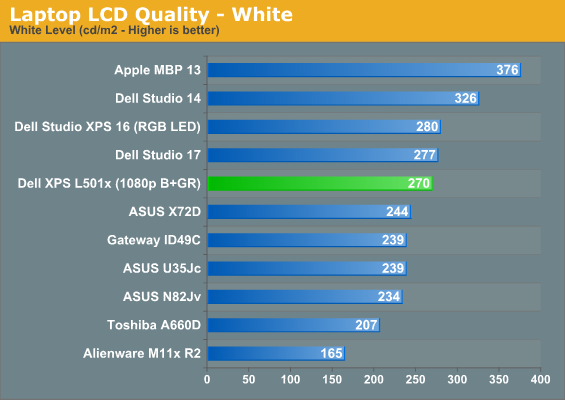 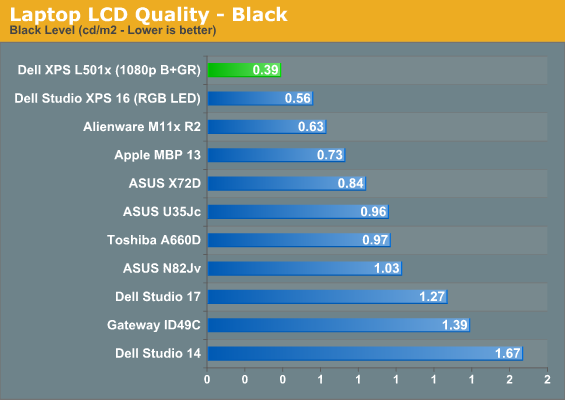 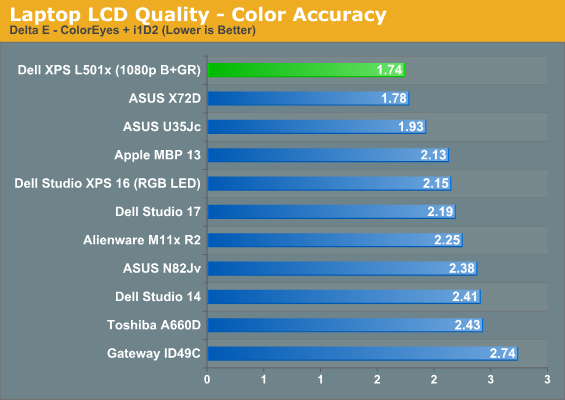 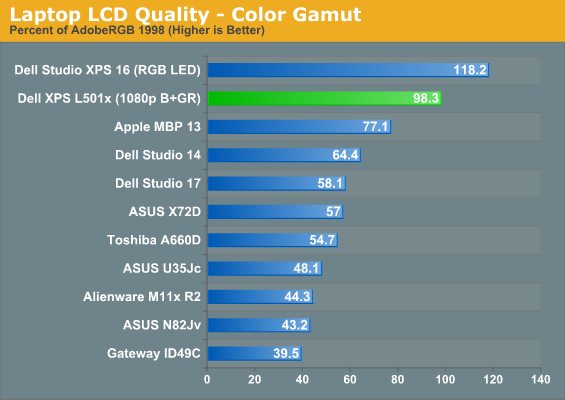 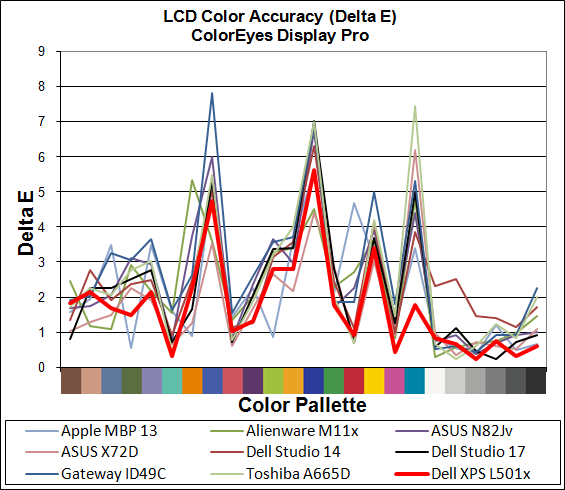 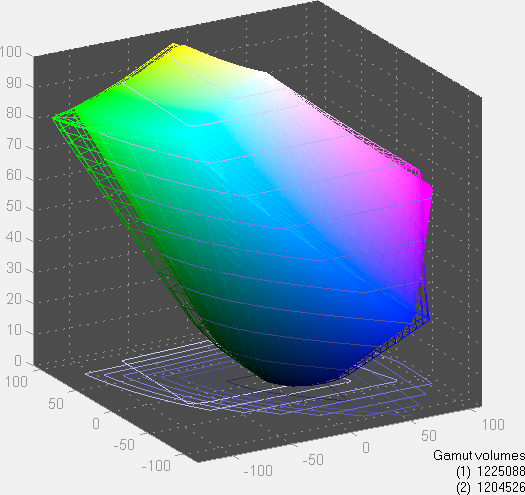 The objective results bear out my initial impression: the contrast ratio comes in nearly 700:1, which tops our charts and outranks even the current MacBook Pro LCDs—including the matte MacBook Pro 15 WSXGA+ panel. But then, glossy displays are usually higher contrast so that last point isn't an entirely fair comparison. Regardless, the display looks great, and it has a good maximum white level of 270nits as well. Maximum brightness is still an area that favors MacBooks, but then color quality favors the L501x.

It's worth noting that there are times when a higher color gamut isn't "best"—specifically, the default Windows color space is sRGB, which is around 82% of ARGB1998. That means if you run an application that isn't color space aware (i.e. most applications!), you'll map to sRGB and your 100% of ARGB1998 gamut now makes colors look saturated. That's not to say it's bad, but there are times (particularly if you're watching videos) where the oversaturated colors are apparent. Then again, would you rather have an image that's a bit oversaturated, or do you like images that are highly undersaturated? Because the latter is what you get with virtually every other laptop panel.

We did some side-by-side comparisons with the L501x and three other laptops to show what it looks like when viewing the standard 24-color GretagMacbeth ColorChecker palette (the same palette we use for our Delta E testing)—you can also see the viewing angles in the above gallery. The first comparison is with a typical ~50% gamut low-contrast LCD; in this particular instance we're looking at the Acer 5551G. Next up is the high-contrast 1080p panel in the ASUS G73Jw, with a 55% gamut. The third comparison is with the older 120% gamut Studio XPS 16 with the RGB LED panel. You can definitely see that the high gamut panels look more vibrant (too much so some would say), and in this case the 98% gamut on the new panel is an improvement. In an ideal world, you'd be able to choose between 82% sRGB backlighting and 100% ARGB1998 backlighting at the flip of a switch, but for now you'll have to settle for one or the other. Apple's MacBook Pro comes closer to the sRGB setting most people use and as such would be slightly preferable, but in practice it will usually only matter if you're really a stickler for accurate colors in certain applications.

For the record, the above ColorChecker chart looks "correct" when viewed in Firefox or the standard Windows Picture Viewer (though not in fullscreen mode for the latter). Opening the image in Internet Explorer (or viewing fullscreen in Picture Viewer) gives the oversaturated look seen in the above photographs. Videos also bypass any color profile you may have loaded, resulting in overly vibrant colors at times. Personally, I didn't have a problem with the way the colors look, especially if I don't have something else nearby to compare it with; your eyes will adjust to whatever you see.

After taxing the system for more than an hour with 3DMark06, system component temperatures remained acceptable. Surface temperatures of the L501x were also satisfactory; the L501x isn't a cool running CULV laptop by any stretch of the imagination, but it doesn't become unbearably warm either. At idle or under light loads, surface temperatures ranged from 27-35C on the bottom, and 27-32C on the palm rests and keyboard, with a noise level nearing the limits of our testing equipment at just 31dB (in a sub-30dB environment). The 3DMark06 loop brought surface temperatures up to 27-40C on the bottom and 27-34C on the keyboard area, with the exhaust vent at 40C. The hottest spot is under the middle-left area, where the GPU sits. Maximum noise levels were consistent under load, with a moderately loud but not horribly annoying rating of 42dB.

Dell XPS L501x Battery Life: Good but the 9-Cell Would Be Better Dell XPS L501x: A Bargain at Any Price
Tweet
PRINT THIS ARTICLE
POST A COMMENT