The Failure of KIN

But we all know the way this story ends - Microsoft killed the KIN.

They're not entirely dead yet, however - Verizon is still selling both the KIN ONE and TWO for $29.99 and $49.99 on contract, respectively, and Amazon is selling both KIN for $0.01. They'll keep selling until Verizon has burned through its inventory. Though launch in Europe has been completely canned, there are just under 10,000 of the KINs in the US that will continue to demand support. The real uncertainty now for KIN is whether Microsoft plans to make good on its previously promised mid summer software update.

But let's look at what really did the KIN in.

For starters, the devices lacked a realistic pricing structure - despite not quite being a smartphone, Verizon priced the data plans for the KIN as if they were, at $29.99 per month. There's since been discussion that Verizon originally intended heavily reduced pricing for the KINs, but soured on the deal when Microsoft delayed release. At the right price, the KINs could have been a compelling alternative to the dying breed of featurephones. It's hard to argue that there isn't a niche that the KIN could have filled at the bottom, yet above boring featurephones. At $10 per month or less for data, the KIN would've been a much more successful sell.

Though they were billed as being attractive for children and teens, the KIN's monthly plans ended up being just as hard to swallow as any other smartphone. It just didn't make sense to buy something that wasn't quite a smartphone, yet cost just as much monthly. Next to aggressively subsidized Android devices that deliver full featured smartphone experiences, the KIN just didn't make sense when buying the handset either. Pricing aside, the KIN did have a number of other notable and ultimately fatal flaws.

For such a strong social networking oriented device, there's a lot that the KINs left desired with regards to all the different social media platforms it tied into. First and foremost was Twitter integration.

As shipped, the devices treat Twitter more like a one-way feed of information. You can post simple updates with text, but cannot tweet and attach photos, geotags, videos, audio recordings, or other media. To be honest, the way Twitter was integrated felt hacked on at the last minute, like Microsoft discovered the API to pull down your timeline, post updates, but ran out of time to do anything more. You can't retweet, reply (without doing it manually), view conversations, search, direct message, view your replies, or anything more. It's basic to the point of being beyond barebones. Further, while social data from Facebook and Myspace makes it into contact cards, Twitter profiles inexplicably don't sync to contacts. 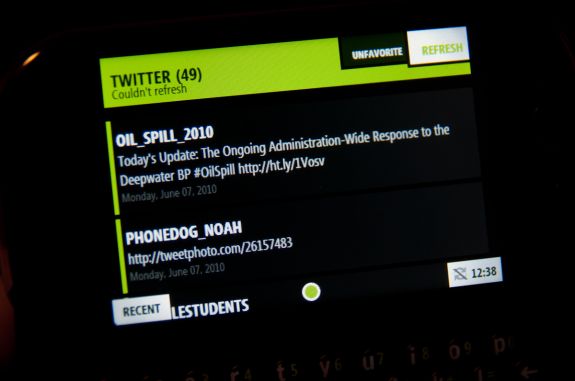 The KINs unfortunately featured one of the worst Twitter clients ever.

There's also the weird and uncertain way that certain social data takes precedence over other social data. For example, avatars come down from Facebook, but not from Twitter.

The next confusing bit was Facebook. I think there are two extremes to Facebook integration into a platform - integrate too much, and Facebook becomes so much a part of the OS that you can't find it anymore because it's everywhere. This is how the KINs integrated faceboook; it's a part of the OS in every nook and cranny. It's in the contacts pages, in the home screen, and in all the avatars. There's no dedicated Facebook application because it's everywhere, alongside data from all the other social media sources that you're prompted to log into during setup. The downside is that there's no specific place to get just Facebook information, instead, it's scattered throughout the OS. 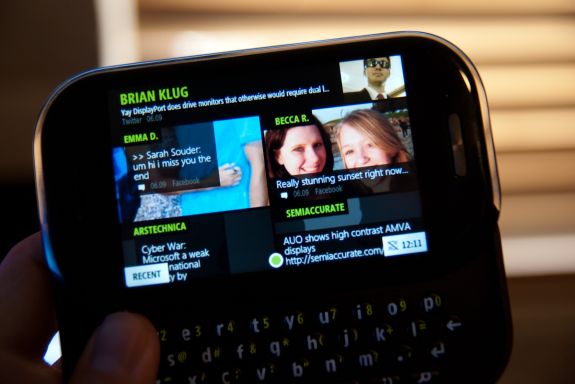 At the other extreme is the iOS approach, which keeps Facebook sequestered away in an application of its own, requiring you to dive into contact information and users pages through that portal rather than through the OS' contacts pages. It's easier to understand at first, but ultimately you're left managing two disparate sets of information.

In between is the Palm Pre and Android approach, which aggregates all the data in a KIN like fashion, but still provides a standalone application for everything else. Ultimately, I believe this is the sweet spot. Data that can be mashed up and aggregated into contact fields should be, but there are some things that just don't map to other parts of the phone's UI. For example, status updates and wall posts are presented in a rather nebulous fashion in the KIN "loop" homescreen, alongside other info. Things like photo albums on Facebook, notes, events, and messages - they don't have any mapping into the KIN OS. Instead, you just do without them. And no, browsing online doesn't count.

The result was that I was left consuming whatever Facebook information was tossed my way, but completely missed all my notifications, wall posts, events, and friend requests. The KIN keeps you tied into the news feed, sure, but people need more. For a completely social phone, I found consuming social media a relatively confusing experience.

That brings me to what else was lacking that was rather glaring - a calendar. With the right execution, the KIN could have perfectly integrated the Facebook event calendar, invitations, and exchange or Google calendars. Instead, the KIN has absolutely no planning tools or event notifications.

It's a glaring reminder of the rift that exists between smartphones and featurephones, and a testament to how many features we take for granted on modern smartphone platforms. But it wasn't a part of KIN. 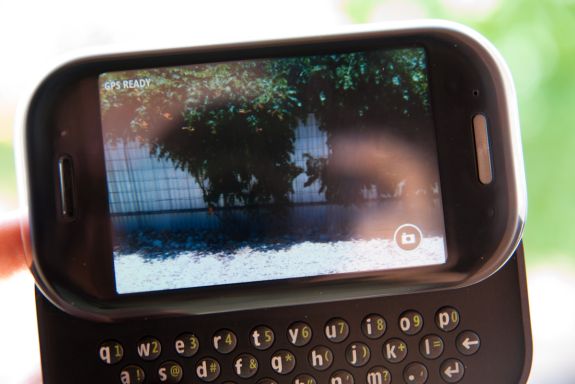 Same for maps. The KIN both included aGPS support and geotagging for photos, yet there was no bundled Bing maps application.

The Danger Hiptops famously included instant messaging support for all the major protocols when they arrived on the smartphone scene in 2002. It's hard to fathom, then, how the KIN lacks instant messaging suppor a whole 8 years later. In fact, the KIN seems like a step backwards from the Sidekicks in a few regards. Social networks are beginning to implement their own instant message protocols, namely Facebook. Microsoft and Verizon were rumored to be releasing a mid summer update that would include instant messaging support and a number of other important lacking features, but that's all up in the air right now. 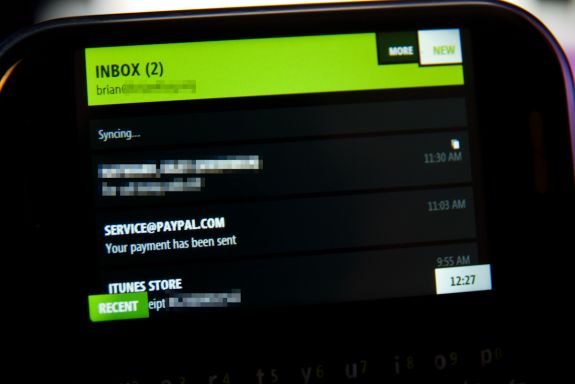 Moving on, the KIN email client was basic, but lacked attachment support for almost all document formats. PDF, Word, Excel, Power Point, and OneNote documents were all unsupported. In fact, the KIN couldn't open BMP, GIF, TIF, or MP3s as attachments either. Essentially all the KIN could open were videos (WMV, MP4, 3GP, 3G2) and photos that are JPG or PNG. The email client also lacked native HTML viewing, and spell check support. 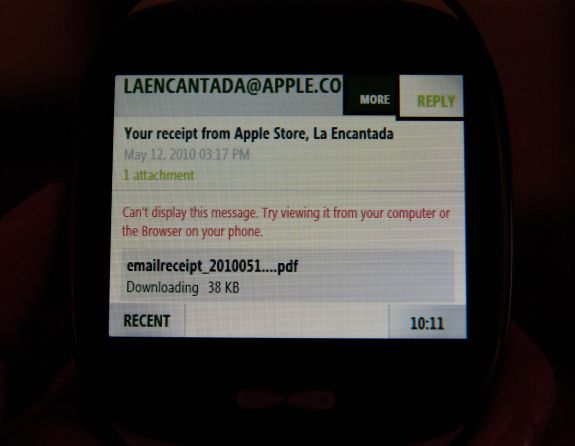 PDFs - You cannot view them.

That brings me to the keyboard assists - there were none. Though both KIN had spectacularly good keyboards, they were hampered by the lack of any autocorrection, capitalization after punctuation, or spell check. It literally amounted to just the keyboard. That's fine for most things, but for pecking out emails on the device, assists are extremely useful. Generation upload might not be the best at grammar, but Microsoft could've at least helped everyone along with some auto capitalization.

Though the KIN was aggressively marketed towards the younger demographic, it surprisingly lacked a feature parents demand in large numbers. Namely, Parental controls. In fact, I came close to suggesting the KIN to a close friend of mine for their son, before it occurred to me that a lack of parental controls made the device something the parents would never swallow. It's that kind of glaring omission that makes the KIN a tough sell.

But the real problem with the KIN was that Microsoft was launching a new phone platform in 2010 without any application marketplace - it didn't make sense. 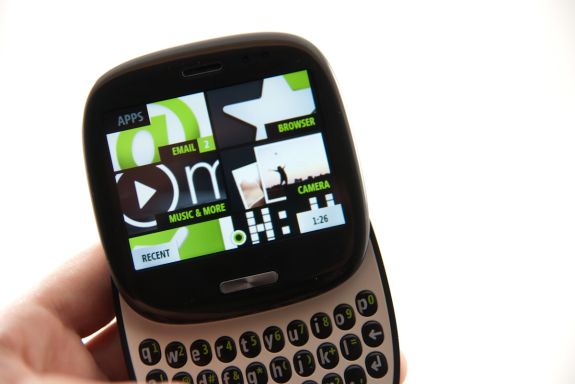 Microsoft promised application support eventually, and even suggested that Windows Phone 7's marketplace would eventually merge with the KIN's. Of course, the reality is that the KIN had no future in a WP7 dominated roadmap.

The KIN's browser felt speedier than Internet Explorer on Windows Mobile ever felt, but still feels an order of magnitude slower than any other mobile browser. Though all of the sites I visit on a regular basis render perfectly, the KIN web browser did abysmally poorly at all the browser standards tests: 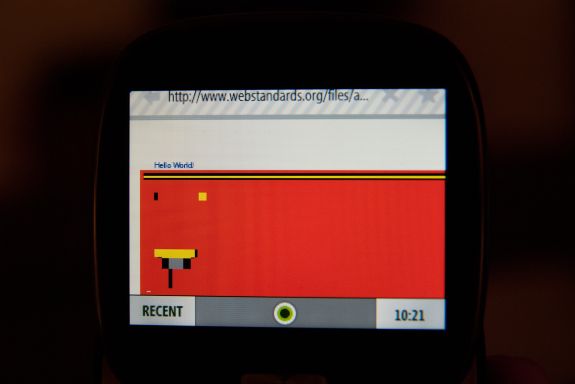 That's not the end of the day for the browsing experience, especially since I never encountered any pages that rendered blatantly wrong. What is killer, however, is only being able to have one page open at a time. There's no support for multiple pages of any kind - no multiple windows, tabs, or anything. 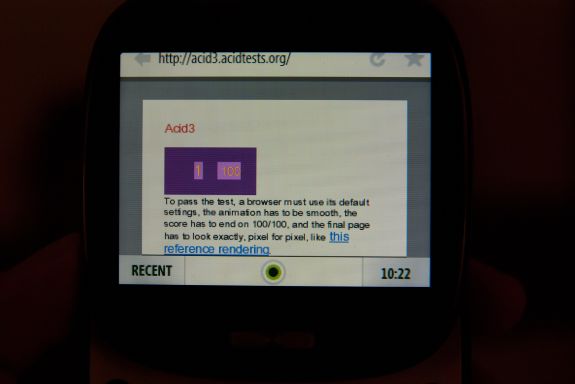 In addition, there's no settings panel for the entire browser to clear cache, cookies, or history. It's the barest of barebones web browsers out there, and while it got the job done, abstracted far too much away from the user.
Unique UI
If you're interested, I've put together a gallery with all of the KIN's settings pages and as much of the user interface as I was going to document in the original review. There's a lot inside there. It's a last testament of sorts to what will otherwise be a quickly forgotten, if colorful UI.
Gallery: KIN Settings and UI
Microsoft's Cloud - KIN Studio Final Thoughts about KIN
Tweet
PRINT THIS ARTICLE
POST A COMMENT