At ATI there’s a document called the Product Requirement Specification, PRS for short. It was originally a big text document written in Microsoft Word.

The purpose of the document is to collect all of the features that have to go into the GPU being designed, and try to prioritize them. There are priority 1 features, which are must-haves in the document. Very few of these get canned. Priority 2, priority 3 and priority 4 features follow. The higher the number, the less likely it’ll make it into the final GPU.

When Carrell Killebrew first joined ATI, his boss at the time (Dave Orton) tasked him with changing this document. Orton asked Carrell to put together a PRS that doesn’t let marketing come up with excuses for failure. This document would be a laundry list of everything marketing wants in ATI’s next graphics chip. At the same time, the document wouldn’t let engineering do whatever it wanted to do. It would be a mix of what marketing wants and what engineering can do. Orton wanted this document to be enough of a balance that everyone, whether from marketing or engineering, would feel bought into when it’s done.

The Best Way to Lose a Fight - How R5xx Changed ATI

In the 770 story I talked about how ATI’s R520 delay caused a ripple effect impacting everything in the pipeline, up to and including R600. It was during that same period (2005) that ATI fundamentally changed its design philosophy. ATI became very market schedule driven. 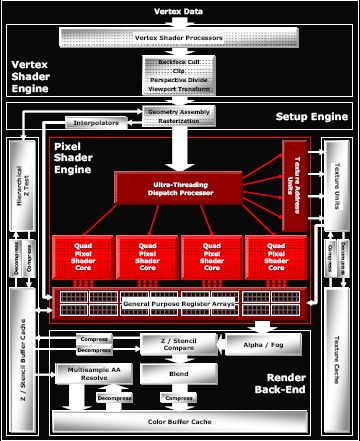 ATI's R520 Architecture. It was delayed.

The market has big bulges and you had better deliver at those bulges. Having product ready for the Q4 holiday season, or lining up with major DirectX or Windows releases, these are important bulges in the market. OEM notebook design cycles are also very important to align your products with. You have to deliver at these bulges. ATI’s Eric Demers (now the CTO of AMD's graphics group) put it best: if you don’t show up to the fight, by default, you lose. ATI was going to stop not showing up to the fight.

ATI’s switch to being more schedule driven meant that feature lists had to be kept under control. Which meant that Carrell had to do an incredible job drafting that PRS.

What resulted was the 80% rule. The items that made it onto the PRS were features that engineering felt had at least an 80% chance of working on time. Everyone was involved in this process. Every single senior engineer, everyone. Marketing and product managers got their opportunities to request what they wanted, but nothing got committed to without some engineer somewhere believing that the feature could most likely make it without slipping schedule.

This changed a lot of things.

First, it massively increased the confidence level of the engineering team. There’s this whole human nature aspect to everything in life, it comes with being human. Lose confidence and execution sucks, but if you are working towards a realistic set of goals then morale and confidence are both high. The side effect is that a passionate engineer will also work to try and beat those goals. Sly little bastards.

The second change is that features are more easily discarded. Having 200 features on one of these PRS documents isn’t unusual. Getting it down to about 80 is what ATI started doing after R5xx.

In the past ATI would always try to accommodate new features and customer requests. But the R5xx changes meant that if a feature was going to push the schedule back, it wasn’t making it in. Recently Intel changed its design policy, stating that any feature that was going into the chip had to increase performance by 2% for every 1% increase in power consumption. ATI’s philosophy stated that any feature going into the chip couldn’t slip schedule. Prior to the R5xx generation ATI wasn’t really doing this well; serious delays within this family changed all of that. It really clamped down on feature creep, something that’s much worse in hardware than in software (bigger chips aren’t fun to debug or pay for).