The Moorestown Update: Atom in Smartphones

The successor to Menlow is Moorestown. Also built on a 45nm process, Moorestown is a highly integrated version of Menlow composed of the following components:

Moorestown is composed of two chips: a north hub and a south hub. The Lincroft SoC is the north hub and it features a LPIA (Low Power Intel Architecture) CPU core (Silverthorne derivative), on-die graphics and on-die memory controller. Both video encode and decode hardware are also included on-die. This is a big step from Menlow because the GPU is now built on a 45nm process since it’s contained on the CPU die itself. The on-die memory controller should also help performance of the in-order core which is highly dependent on receiving dependent data as quickly as possible. 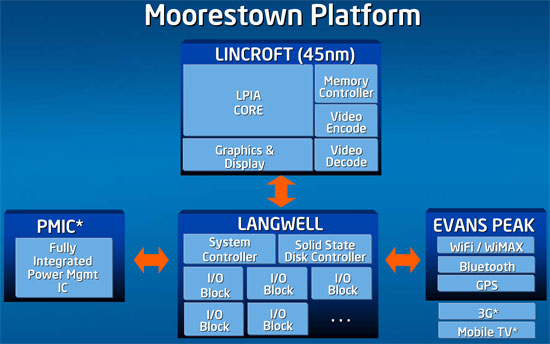 The Langwell south hub is an extremely focused piece of silicon given how highly integrated the Lincroft north hub/CPU is. Langwell is composed of a system controller, solid state disk controller and I/O blocks for things like USB or audio.

The Power Management IC (PMIC) plays a mystery role at this point. Intel is just revealing that it handles power management for the platform yet not fully detailing its active roles. The PMIC interfaces with the Langwell south hub which is being licensed to 3rd parties to actually make the PMIC.

The final component of Moorestown is the Evans Peak networking hub, which is made up of Intel and non-Intel silicon. Intel will enable Wi-Fi, WiMAX, Bluetooth and GPS while 3rd party vendors can supply chips to enable things like 3G on Moorestown platforms.

As we mentioned before, Moorestown rids the platform of any PCI bus which apparently precludes it from being used with Windows Vista, because of this all Moorestown based MIDs will be running Linux. Linux is a far better fit for something like Menlow or Moorestown simply because the performance levels are too low to be used with a hog like Vista. Vista can work on these platforms, just not with iPhone-smoothness.

Moorestown will allow Intel’s Atom CPU to exist in larger smart phones (4 - 5” size), while its successor in 2010/2011 will use the magic of Intel’s 32nm process to finally get into something iPhone-sized.