Dual Core Linux Performance: Two Penguins are Better than One

Ripping DVDs on Linux is one of the applications Linux really does well at - if you don't mind getting past the pretty GUI of DVD Shrink or a similar application. Ripping DVDs in general is fairly common for any desktop regardless of OS, and checking mail while ripping a disc can inflict havoc sometimes. The following test attempts to mirror Anand's Windows benchmarks on Linux and is very comparable to the Windows alternatives.

Again the emphasis is not particularly whether or not one system is capable of finishing the DVD backup faster than the other, but whether or not the system is still useable while doing so. We might be pushing the load of our system a bit far - but a machine that can rip DVDs fast but can't play music at the same time is effectively useless to us. Like Anand's test, the vob files were already placed on the hard drive to eliminate the DVD drive bottleneck. We have instructed dvd::rip to reduce our vobs from 7.5GB with transcoding to 4.5GB. 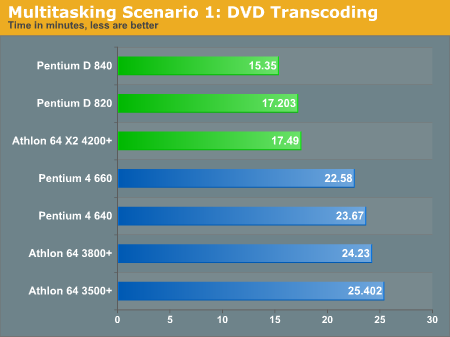 Although the load from our other application is not substantial, the combination of several low intensity applications and the introduction of a maximum load application (dvd::rip) end up bringing our single core platforms to a halt. The results of this benchmark were eerily similar to Anand's Windows benchmark, and the same culprits are pretty much to blame. Even if Linux might have a leg up on Windows' scheduler, no amount of clever preempting can beat a second processor core.