As I mentioned on the first page, the LG X Power comes in two versions. The international model uses MediaTek's MT6735 SoC, which has four Cortex A53 cores with a peak frequency of 1.3GHz. The North American model uses Qualcomm's Snapdragon 212 SoC with four Cortex A7 cores that also reach a peak frequency of 1.3GHz. Depending on the workload, there can be a considerable performance difference between Cortex A7 and Cortex A53. I don't know why LG has opted to ship two models of the same phone with significantly different SoCs, and it would have made much more sense to use Snapdragon 410 in the North American market.

I don't have both models of the LG X Power available for review, so I can really only speak to the performance of the North American model. There will definitely be differences in CPU and GPU performance between the two, and it's also important to note that the international model has an additional 512MB of RAM. Since the LG X Power doesn't support OpenGL ES 3.1, I've cut some of the benchmarks from the standard group that I run. Below I've organized the remaining benchmarks into sections that represent what part of the system each benchmark tests. 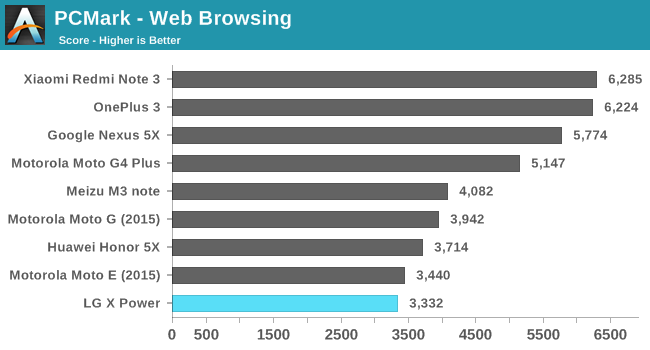 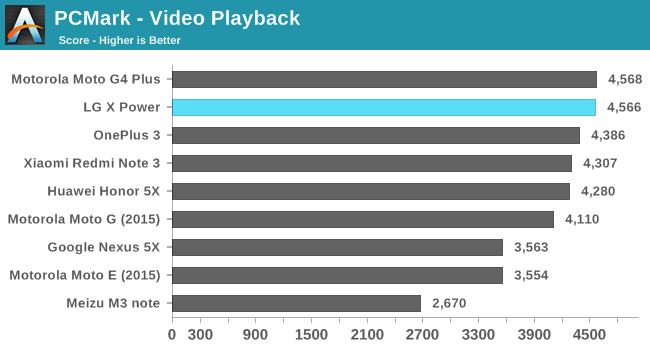 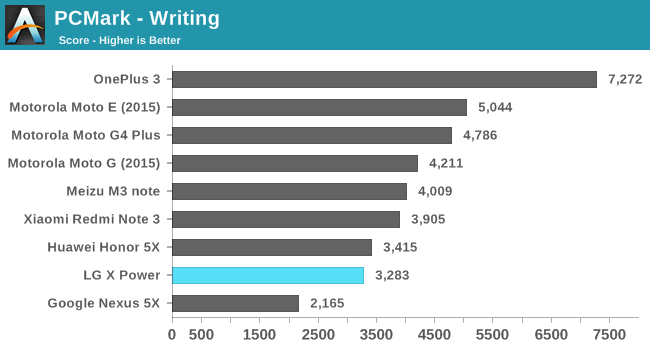 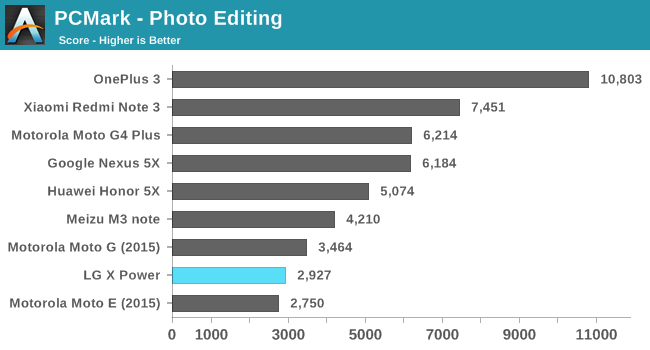 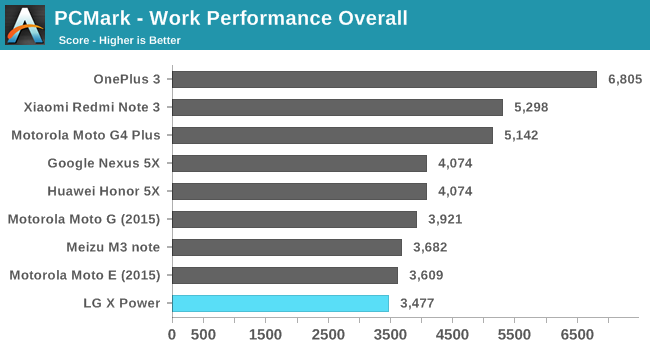 PCMark is a good benchmark because it simulates actions that users perform on a daily basis, and does so using the same system APIs as real applications. This makes it particularly sensitive to software optimizations, as well as changes in Android version that bring improvements to the Android API.

The LG X Power doesn't get off to a good start in PCMark. In every sub-test except the video playback test it is one of the slowest devices on record. While it doesn't come in very last in photo editing or writing, it's close enough that the devices it beats in those individual tests actually end up doing better when all the scores are aggregated, making the LG X Power the overall slowest device on record for PCMark. 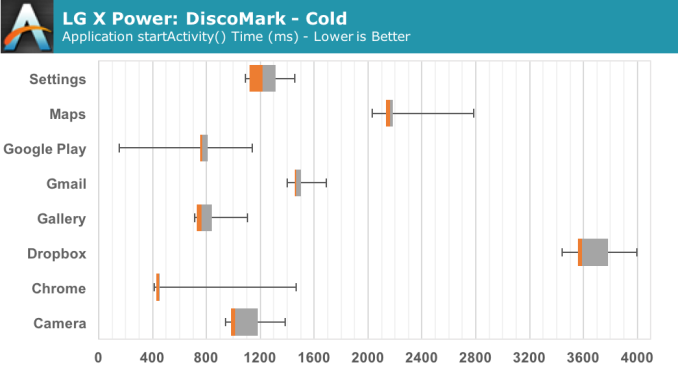 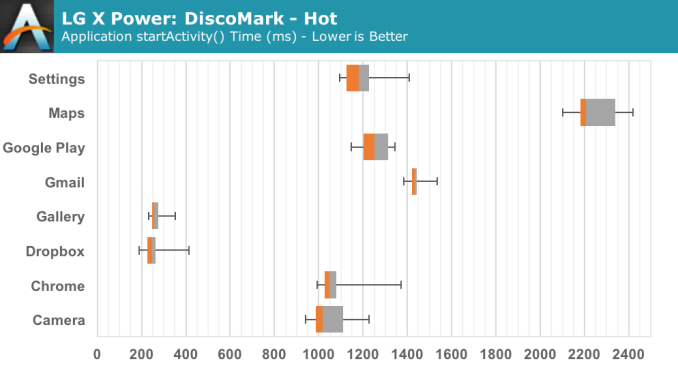 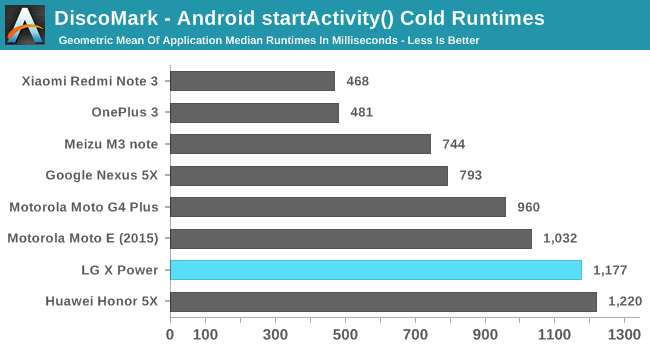 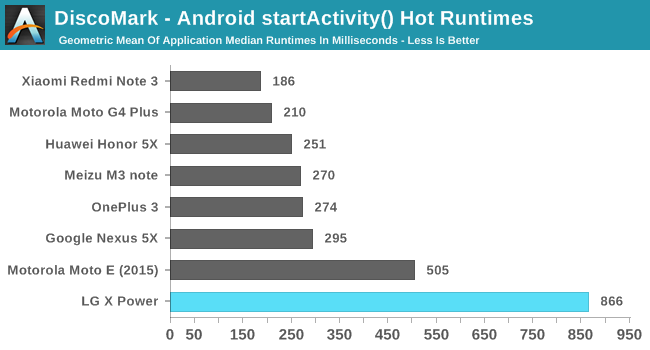 DiscoMark is a new addition to our benchmark suite. It allows us to measure the time it takes for an application to launch by monitoring how long it takes for an Activity to be created after a call to Android's startActivity method. For testing we have selected a group of commonly used applications, and the box-and-whisker diagrams allow the quickest and longest launch times for each app to be displayed, along with the first and third quartile boundaries. We also split the test into two parts, with the first being cold launches where an application has been killed before being launched, and hot launches where an application will still be resident in memory if the phone has enough RAM to accommodate it.

Unfortunately, DiscoMark shows how limiting the 1.5GB of RAM in the LG X Power is. In the cold launch test you're really limited by the speed of your SoC, and to an extent your NAND speed as things are read from persistent storage and loaded into memory. In this case the LG X Power is in line with Cortex A53 devices despite its use of a Cortex A7 CPU, which isn't a bad situation to be in.

The real issue for the LG X Power is the hot app launch times. The average median runtime for launching an app that could be resident in memory is 866ms, nearly twice as long as the next slowest phone, and three or four times slower than most other smartphones. It's apparent that LG is having to evict applications quite frequently, which means that although we aren't forcibly killing the apps, they're being re-created from scratch nonetheless. One interesting thing to note is that the Moto E (2015) performs much better despite having only 1GB of RAM, and this is probably a combination of LG's much heavier software customizations, along with different policies for memory management, data caching, and app eviction.

The impact that this has on the user experience is immense. It takes nearly a whole second to switch to an app that you would expect is still in memory, because it has often been evicted if you've opened only a couple other apps since you last used it. It makes the phone feel incredibly painful to use, to the point where you end up not using the phone because of how slow it is. With that in mind, the phone's large battery looks more like an insurance policy than a useful feature, because the phone will already last a long time by virtue of you choosing to avoid using it unless you absolutely need to. 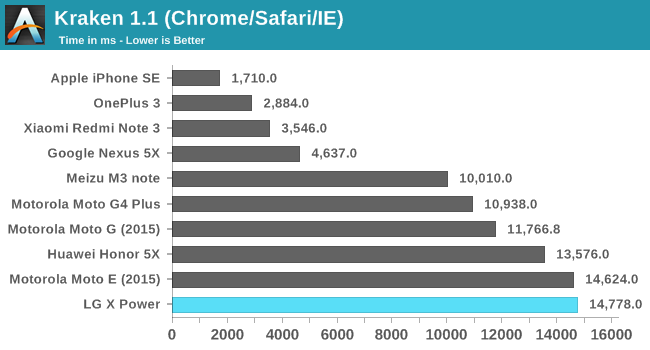 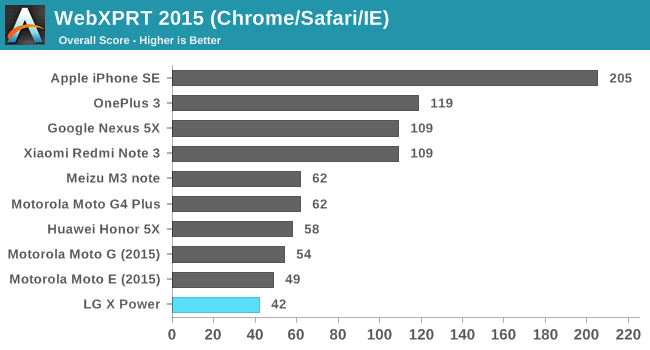 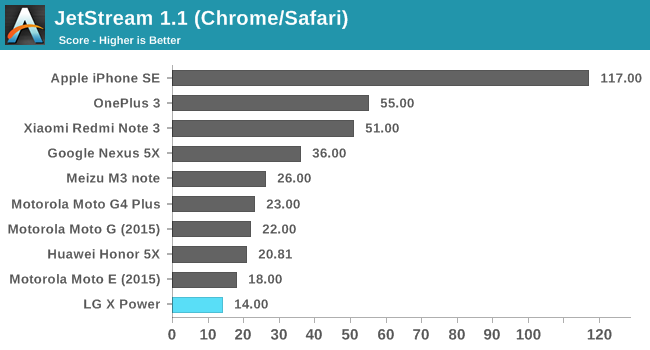 Unsurprisingly, the LG X Power is the slowest device in all three web benchmarks. A quad core Cortex A7 SoC is just not competitive at all, even against the Moto E from February 2015, which launched at a lower price than the LG X Power. I don't really have much else to say here, as the web browsing performance of the LG X Power is just terrible, and I find it shocking how LG has seemingly bet the entire phone on a giant battery and neglected performance entirely, to the detriment of the user experience. 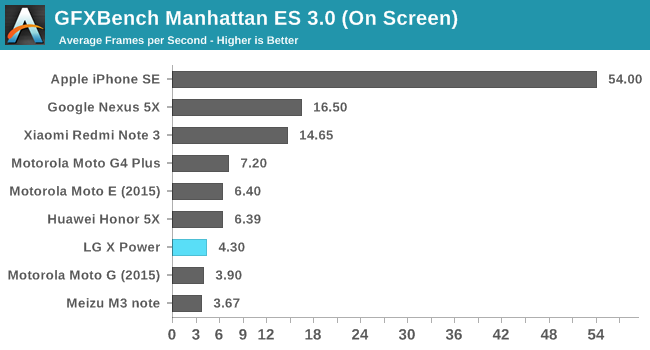 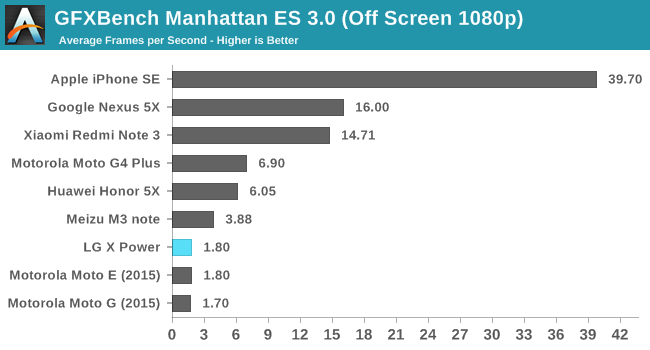 Adreno 304, 305, and 306 are essentially identical, so it's not a surprise to see that the LG X Power sits right beside devices that use Snapdragon 400 and 410 in GFXBench's Manhattan ES 3.0 graphics test. Low end smartphones just don't have great GPU performance, although it won't prevent simple 2D games from being played. I don't expect this to change any time soon for phones that cost close to $100, but I also doubt that it impacts the kind of user that purchases a $100 phone in any appreciable manner. 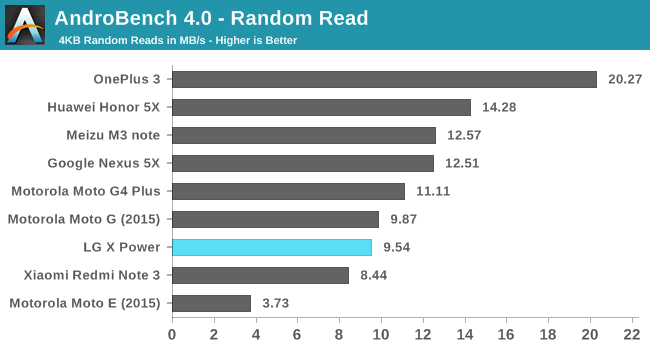 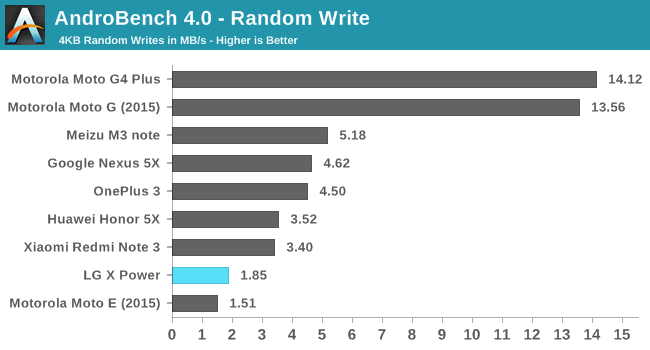 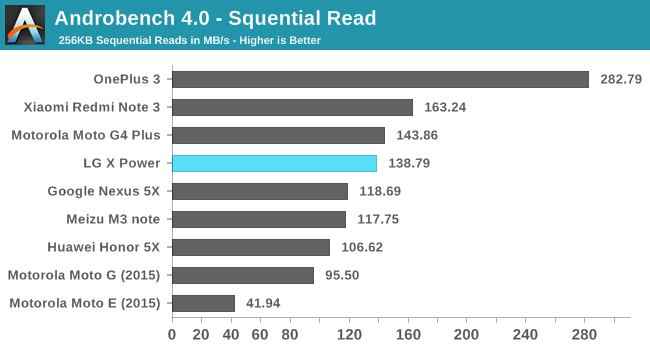 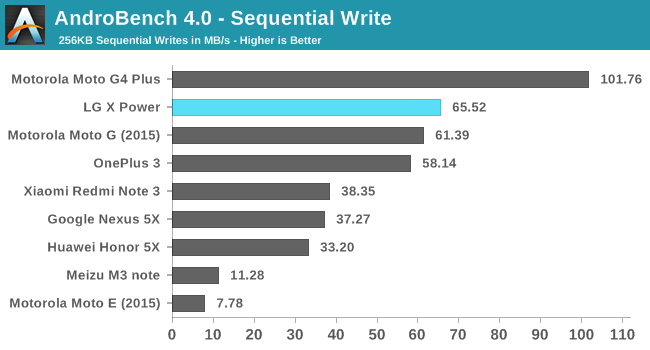