Gigabyte threw together some really solid features for the 7VAXP motherboard. 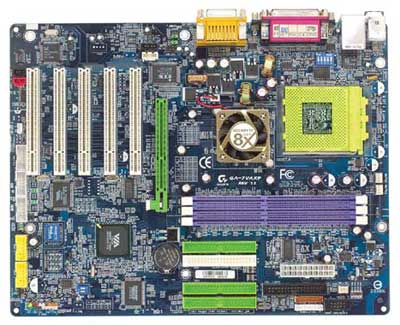 We start off by examining the Promise PDC20276 RAID controller that comes with the 7VAXP. This is a very standard RAID chip, supporting RAID 0 (striping) and RAID 1 (mirroring) arrays. This chip also supports up to the unofficial ATA133 transfer rate. Unlike other onboard RAID chips we've seen (like the HighPoint's HPT374 RAID controller that supports up to 8 IDE devices), the PDC20276 supports 2 channels for support of up to 4 IDE devices.

The addition of an onboard Firewire chip (VIA VT6306) is always something we like to see included with a motherboard. Even more important is the fact that the 7VAXP has three Firewire headers for you to use, although that's a bit excessive considering the VT6306 chip limits you to no more than 3 Firewire ports total. However, it's always nice to see more options, isn't it? The vast majority of motherboards are now coming with USB 2.0 support, and the Gigabyte 7VAXP natively supports USB 2.0 through the VIA VT8235 South Bridge. This offers support for up to 6 USB ports. Besides the two rear USB ports present on the 7VAXP, you also have two USB headers located at the bottom of the motherboard if you feel the desire to expand the rear I/O options.

Sound and LAN are powered by Realtek chips, dubbed the ALC650 and 8100BL.

There's nothing special about either chip; the ALC650 is a conventional 6-channel AC'97 sound chip. The 8100BL is a good old fashioned 10/100 NIC, except it's an onboard chip and not a separate PCI card obviously. We had no trouble setting up either LAN or sound during our testing.

As usual, Gigabyte's Dual BIOS is present on the motherboard: 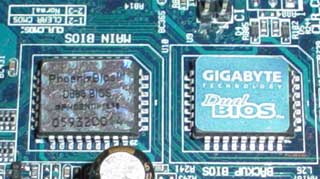 As the name implies, Dual BIOS refers to two physical BIOS chips mounted on the board itself; should one get corrupted or improperly flashed, you can default to the remaining BIOS in order to recover from an otherwise certain disaster. The feature is fairly cheap to implement and results in much lower RMA rates for user caused problems (more specifically, incorrectly flashing your BIOS).

Just like Soyo did with their KT400 Dragon Ultra, Gigabyte went with active cooling on the KT400 North Bridge: 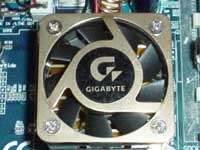 As we mentioned in previous KT400 reviews, active cooling isn't the greatest idea if you desire an absolutely silent system with no chance of North Bridge fan failure (OEMs especially don't usually like lots of moving parts, active North Bridge fans included). We would like to see Gigabyte take more of an ASUS approach and opt for a larger passive heatsink rather than a smaller heatsink with a fan mounted on it.

There's plenty of room for expansion on this motherboard, with 5 PCI slots available. You're also capable of fitting in as much as 4.0GB of memory in any of the 3 available DIMM slots if you desire to do so.

One of the somewhat more noticeable features of this motherboard is support for up DDR400 memory. In our previous three KT400 reviews, it has been made quite clear that DDR400 brings absolutely no extra performance to the Athlon XP platform just yet. This holds true for the Gigabyte 7VAXP for the most part, but, as you'll see in our benchmarks shortly, there's actually a little bit of a performance boost. Skip to the "Stress Testing" section for more information regarding DDR333 and DDR400 compatibility, performance, and stability/reliability information.