After NVIDIA released the TNT2 Ultra, we saw the first incarnation of the now common “6-month product cycle.” The strategy was the exact one used to dethrone 3dfx, and is based on a very simple principle of using parallel design teams. If you have three design teams, one working on the current generation product, one working on the 6-month follow-up and one working on the next-generation solution, assuming all teams work efficiently, you should be able to maintain a stream of GPU releases in 6 month intervals.

To make the job a bit easier, you only work on inventing new architectures every 12 months, giving you a little break in between the hectic lifestyle of a GPU design engineer. But in order to maintain competitiveness you have to have a product every 6 months, so in the time between architectures you simply “refresh” your current generation architecture. A refresh is generally a higher clocked GPU, potentially with some faster memory, made possible due to more experience with manufacturing that particular GPU (yields improve over time) and the availability of faster memory. Sometimes we get advancements in process technology that allows for a boost in clock speed as well.

When NVIDIA introduced the 6-month product cycle the idea was that new architectures would debut in the Fall, and refresh products would hit in the Spring. The delay of NV20 (GeForce3) changed things around a bit and the GeForce2 Ultra became the first “Fall refresh” product. Since then, little attention has been paid to when various GPUs hit, as long as we get something new every 6 months we’re happy. Earlier this year we heard that both ATI and NVIDIA would be releasing their true next-generation hardware next Spring, leaving this Fall as the refresh cycle. 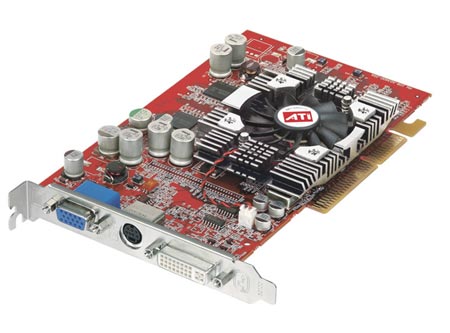 The hefty increase in clock speed is due to improvements in process technology as well as the introduction of a low-k dielectric. As we briefly explained in our 9800 XT review, the benefits of a low-k dielectric are mainly related to shielding from crosstalk in high transistor density chips, which gives us the clock speed boost we see with the 9600 XT. Because we’re just talking about an increase in core clock speed, the games to receive the biggest performance boost from the XT would be those that are GPU-limited, which unfortunately are few and far in between these days. Games that are largely shader bound such as Half Life 2 will definitely enjoy the 9600 XT’s increase in clock speed, but for now we’ll see most of the performance benefits go to waste.

We explained OverDrive technology in our Radeon 9800 XT review and tested it in our Catalyst 3.8 driver update. The Radeon 9600 XT includes an on-die thermal diode that measures the temperature of the core; when the temperature is cool enough the driver will instruct the core to overclock itself by a set margin. The Radeon 9600 XT will run at one of three speeds depending on its temperature: 500MHz, 513MHz or 527MHz. The combination of this driver and hardware support makes up ATI’s OverDrive feature.

OverDrive is currently not enabled for the Radeon 9600 XT in the Catalyst 3.8 drivers, we will have to wait for the Catalyst 3.9s before we can test the 9600 XT with OverDrive. If you’re curious about the performance implications of enabling OverDrive, have a look at our Catalyst 3.8 review – it’s nothing to get too excited about.