While I haven’t been deeply involved in the review of the Pixel C, I also happened to receive the Pixel C tablet for evaluation. My initial impressions of the device were relatively positive as the keyboard docking mechanism is relatively smart and novel, although not perfect. The use of a magnetic flap which rotates with a high amount of tension to keep the tablet upright is a very smart way to avoid including a kickstand, but it definitely takes a bit of time to get used to the actions required to separate the tablet and keyboard, flip the tablet to the right orientation, and connect it. The design and construction of the device are also quite competitive with the best tablets on the market. 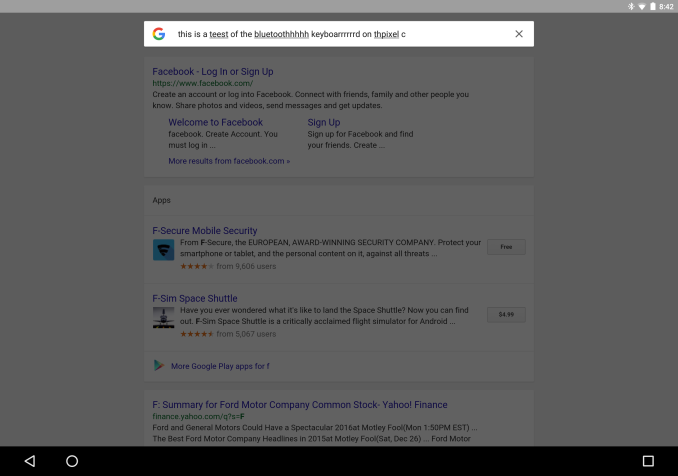 Unfortunately, pretty much any praise I have for the Pixel C ends once you look past its physical aspects. As soon as I attempted to do some initial setup using the keyboard accessory, the experience completely fell apart due to contention by other communication on the 2.4GHz frequency space. A casual scan of the networks in the area shows a pretty significant number of SSIDs from neighboring apartments, and while it isn’t quite at the level of a convention center, I had a significant number of connectivity issues that still haven’t gone away after multiple days. This manifests as either the keyboard not registering at all despite showing up as connected, repeated key strokes, or significant input latency on the order of multiple seconds.

In addition to these issues, the Pixel C tablet also seems to be have some significant touch screen latency and registration issues. It felt like I needed to use multiple taps to get anything to register, and even when it registers there can be a shocking amount of latency before anything happens. This really shouldn’t be happening on anything remotely high-end in 2016, so this alone makes me reluctant to even consider recommending it to anyone.

Even when one puts these concerning issues aside, there's no way to ignore how the software really holds back this tablet. In terms of usability, this is arguably somehow below the iPad Air 2 in practicality, as pretty much every app is just a larger version of the phone application without much in the way of proper utilization of the larger display size. There’s also no multi-window functionality, which is shocking when you consider how Samsung, LG, and numerous other OEMs have implemented some form of this functionality for years at this point. Even Apple’s iOS, which started out with basically no ability to adapt to varying aspect ratios, display sizes, and pixel densities, has decent multi-window functionality working at this point. It’s deeply concerning that Google has taken so long to implement functionality that clearly has demand given how many OEMs have implemented it in their Android skins, especially given that Android was designed from the ground up to support multiple device resolutions and sizes.

Overall, I’m not even sure this measures up to the iPad Air 2 which is well over a year old by this point. I cannot in good conscience recommend anyone buy this tablet until the touch screen issues and generally poor performance has been resolved, and even then that recommendation would be to a limited group of people solely interested in a touch-only Android tablet.