Google’s Pixel C is the first Android tablet that’s shipping with Android Marshmallow out of the box. Marshmallow isn’t as large of a release as Android Lollipop was, but it includes some notable features like Doze which works to improve standby battery life, Google’s new fingerprint API, and Now on Tap which can grab content from the application you’re in and provide relevant information and search results.

Unfortunately, what Android Marshmallow doesn’t bring is anything significant to improve the experience on Android tablets. Google has made some changes, such as rearranging the software keys on the bottom so they can be used more easily by your thumbs, but they seem like halfhearted attempts when one considers that the issues have existed on Android tablets since the first ones were released, with the exception of the short-lived Honeycomb generation. Marshmallow still doesn’t come with anything to parallel the multitasking gestures that the iPad has had for years, which continues to impede usability and slow down multitasking. There’s no support for split screen applications either, and most of the core applications still act like large versions of their smartphone counterparts. 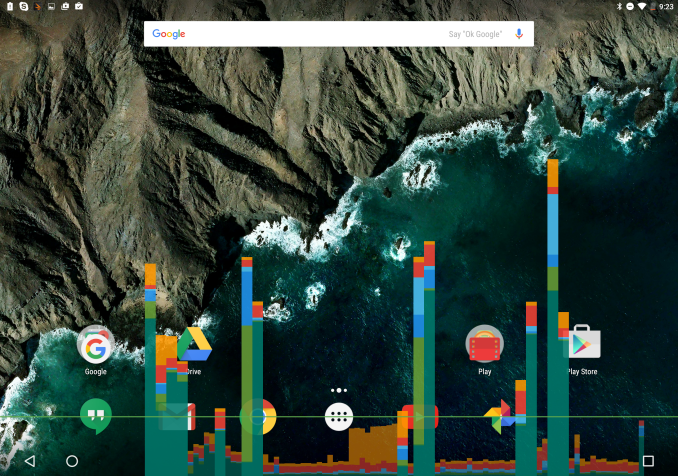 The Pixel C has a great number of software-related problems that are specific to it as well. Despite how fast Tegra X1 is, and the fact that the SoC is seemingly always using its A57 cores, the interface can be quite janky at times. Normally things perform fine, but both Josh and I have observed random lag and frame drops when doing basic actions like scrolling, opening apps, and bringing down the notification drawer. The worst offender that I've found is pinch to zoom in Chrome. The pinch to zoom implementation on Android has always been quite poor, with the zooming not tracking well with the user's actual pinching motion. In this case, the problem is also that the zoom animation just has an incredibly low frame rate at times, to the point where it's like watching a slide show. It’s honestly shocking to see these issues on a device designed by Google running software designed by Google.

Performance issues are hardly the end of the problems. I was testing the Pixel C during the course of a trip to Europe, and I’ve encountered numerous issues with WiFi connectivity on the Pixel C. They range from an inability to connect to WiFi hotspots because the login page never appears, to issues with the tablet repeatedly disconnecting or failing to connect at all with absolutely no indication as to what the problem is. It’s worth noting that I had my MacBook Pro and the Nexus 5X with me, and neither of them suffered from these issues with the exact same WiFi networks. 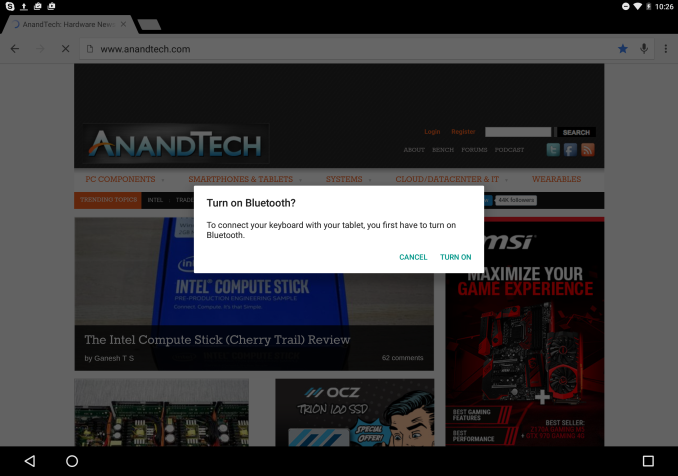 Josh has also encountered issues of his own relating to keyboard connectivity. Because it connects over Bluetooth and not a physical link, the Bluetooth link is susceptible to interference from anything else operating on the 2.4GHz band, which includes everything from nearby WiFi to microwave ovens. I'm lucky in that I live in a lower density area, but in his case, there have been several circumstances where the keyboard simply will not maintain a stable connection to the Pixel C. This would have been easy to resolve by using a physical connection like Microsoft and Apple do with their keyboard accessories, but with the rushed circumstances surrounding the Pixel C’s launch as an Android device it may be that it wouldn’t have been possible to integrate OS level support and so the existing Bluetooth keyboard support was used.

Another problem that I am hoping is actually a software issue relates to the touch digitizer. I already mentioned in the display section that it’s very easy to see the grid which is quite annoying, but what poses a serious usability problem is that it simply doesn’t function properly. I have completely lost track of the number of times my swipes and taps were not registered, and very often the display will register a swipe as a tap and bring me into some new screen that I never wanted to open. Sadly, it’s not a stretch to say that the touch input is basically broken. While I thought that this may be an issue unique to my unit, it also exists on Josh’s Pixel C sample as well so it’s clearly not an isolated issue. Google tells me they have a fixed planned, and I hope it ends up working because the issue makes the tablet basically unusable and it needs to be fixed before I can give the Pixel C any sort of recommendation.

I believe that tablets can be used for productivity work, and I make a point of using the tablets I evaluate to write a good portion of their own review. Unfortunately, despite its supposed focus on productivity with its keyboard accessory, I couldn’t safely write any of this on the Pixel C because the software is simply not stable or usable. I have completely lost track of the number of instances where apps would crash, the tablet would lock up for minutes, or the entire operating system would crash and the tablet would reboot. It’s such an unstable experience that I have no idea how it ever shipped in this state, and it seems like Google either didn’t do enough testing or simply ignored the results of testing in order to meet their promised holiday ship date. These issues make it unsafe for me to attempt to write any documents on the Pixel C, as I fear that it will crash without warning and my work will be lost. It’s no secret that Google originally intended for the Pixel C to run a touch-optimized version of Chrome OS which would work with the combination of the touch screen and the keyboard. However the Android build that is currently shipping on the device is not usable for any of the tablet’s intended purposes, and certainly not acceptable for a $500 device. 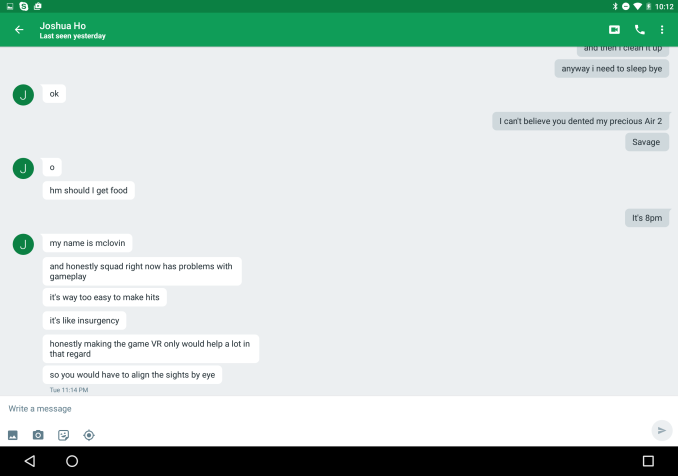 On top of the issues with this specific Android build, Android itself is simply too far behind the competition as far as functionality and apps are concerned. I have commented on this in several Android tablet reviews, but the fact that Google is shipping their own tablet makes it important to go over it once again. Quite frankly, I still have yet to see a single app that has an UI that is both optimized for tablets and is as fluid as its iPad counterpart, and with the iPad offering multitasking while Windows offers an entire windowing system, there’s absolutely no way for the Pixel C and other Android tablets to be competitive. This applies just as much to Google’s own apps as it does to third party ones, and it’s really not a stretch to say that they behave like you’re using a blown up smartphone. In the past few years both Apple and Microsoft have stepped up their games with their respective tablet OSes go, but it feels like Android has never really advanced past the first generation of tablet OSes, which leaves Android badly lagging the competition.

Statements from Google engineers make it clear that Google has some changes coming to Android in the future to bring features like multitasking, but at this point it seems to me that either nobody Google really understands what a tablet should be, or they are unable to come to a consensus to get something developed. Adding multitasking doesn’t do anything to fix the fundamental issue with application quality, and Google doesn’t want to take the first step in making proper applications so that other developers can follow. Google should not be trying to sell a product based on features that they might decide to add in the future, and with the existing progress of Android on tablets there’s no reason to trust that the necessary features to fix the user experience will ever come.

The fact that Android is in such a poor state on tablets, along with Google’s low quality UIs in their own apps, makes me very skeptical of any chance of the platform being made competitive with iOS and Windows in these respects. This doesn’t just apply to the Pixel C, but the fact that Google has decided to ship a device with such inadequate software for such a high price is very concerning to say the least. At this point, I don’t know if I can really recommend any high end Android tablets in good conscience, because I know they won’t be offering the buyer what they deserve for such a high price. This applies even more so to the Pixel C, which has stability issues that I can’t believe exist on such an expensive tablet with both the hardware and software designed by the same company.