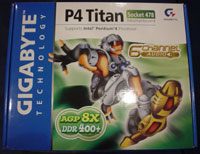 During most of this summer we have gained quite a bit of experience with SiS 648-powered motherboards; these include Shuttle's AS45GTR, ABIT's SR7-8X, MSI's 648 Max-F, and of course SiS's own 648 reference motherboard. The Gigabyte 8SG667 we're putting to the test today is the fourth retail SiS 648 motherboard we've tested in the past six weeks. And in just six weeks since the first SiS 648 motherboard hit the market (Shuttle's AS45GTR), we've seen quite substantial improvement in not only performance but reliability as well (especially DDR400 reliability). While every single one of the SiS 648 motherboards we've tested have performed and operated seamlessly at DDR333 speeds, DDR400 functionality has been another story altogether. Some of the quirks at DDR400 settings are quite understandable though, since DDR400 has yet to be validated as a spec by the Joint Electron Device Engineering Counsel (JEDEC).

Despite some of the minor issues with DDR400 and certain 648 motherboards, SiS's 648 chipset has nonetheless gained the respect of a lot of system integrators, mostly those looking for a low-cost, high-performance solution.

Gigabyte's 8SG667 motherboard will certainly not disappoint those looking for such a setup. Find out why there's a lot more to this product than you think…