The Impact uses MultiCore Turbo, which typically increases the voltage at load to ensure a consistent top multiplier no matter what the loading is. The result of this increased performance is typically increased power consumption, and we’ve seen motherboards cause the i7-6700K CPU to consume 76W (from idle to OCCT load) up to 110W. With the Impact, perhaps due to its size, makes that delta only 90W, which isn’t as good as the non-MCT motherboards, but it currently the best MCT motherboard for power draw we’ve tested. 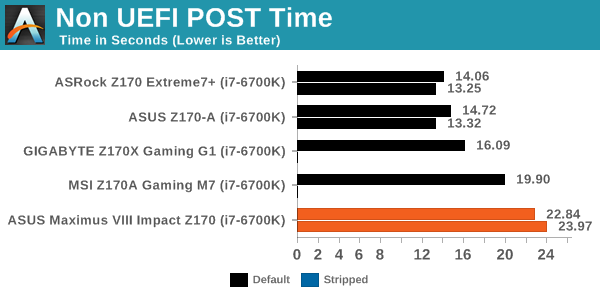 Anything over 20 seconds for a mainstream motherboard is usually seen as odd, which is why question marks come over the Impact sitting at 22 seconds when the Maximus VIII Extreme (which is being tested) only needs 16.50 seconds.

ASUS’ audio results in our test keep hitting high notes (pun intended), and the Impact is no different with a good SNR but also great distortion numbers. 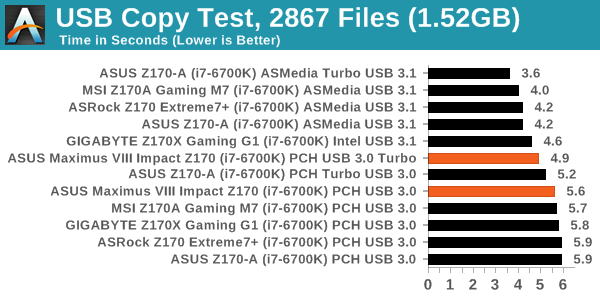 The USB 3.0 performance for the Impact was good to take top spot in our non-Turbo testing, but we had issues on the Impact testing the Alpine Ridge controller in USB 3.1 mode, as well as either mode using the Boost software. The test would end quickly, but say all the data is transferred and yet the drive is still working, showing that reporting the complete transfer is happening before the data is committed. Thus always make sure the drive is finished before removing! It also means we can’t run our tests properly.

ASUS has been on a recent march towards low DPC numbers, and the Impact scores under 50 microseconds, making it one of our best ever results. The victory is short lived however, as we’re currently testing the Maximus VIII Extreme, and that scored under 25.