One of the more significant characteristics of the Nexus 6P is the device’s AMOLED screen. Similar to last year’s Nexus 6, Google has chosen to employ the 6P with a panel from Samsung. While the Nexus 6’s panel seemed to lack in quality, both power and image quality wise, the 6P’s unit is quite excellent. 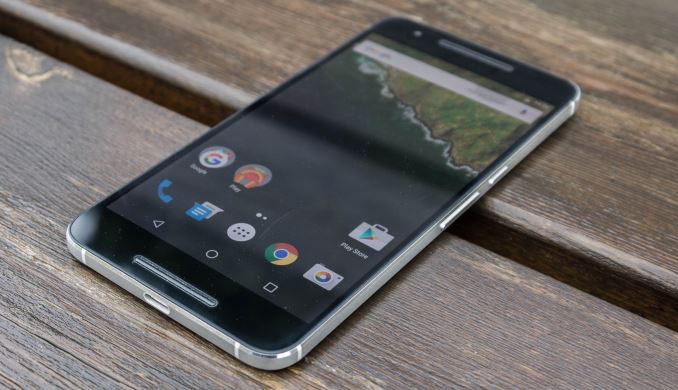 The screen is very clear and offers excellent homogeneity. Ever since the first AMOLED devices came out a few years ago Samsung has managed to steadily advance the technology with improvement with each yearly generation. The Nexus 6P’s can be said to rank well among the Note 4 or Note 5 in terms of image quality, and it seems the 6P’s lamination actually provides slightly better viewing angles than what’s found on Samsung’s devices. 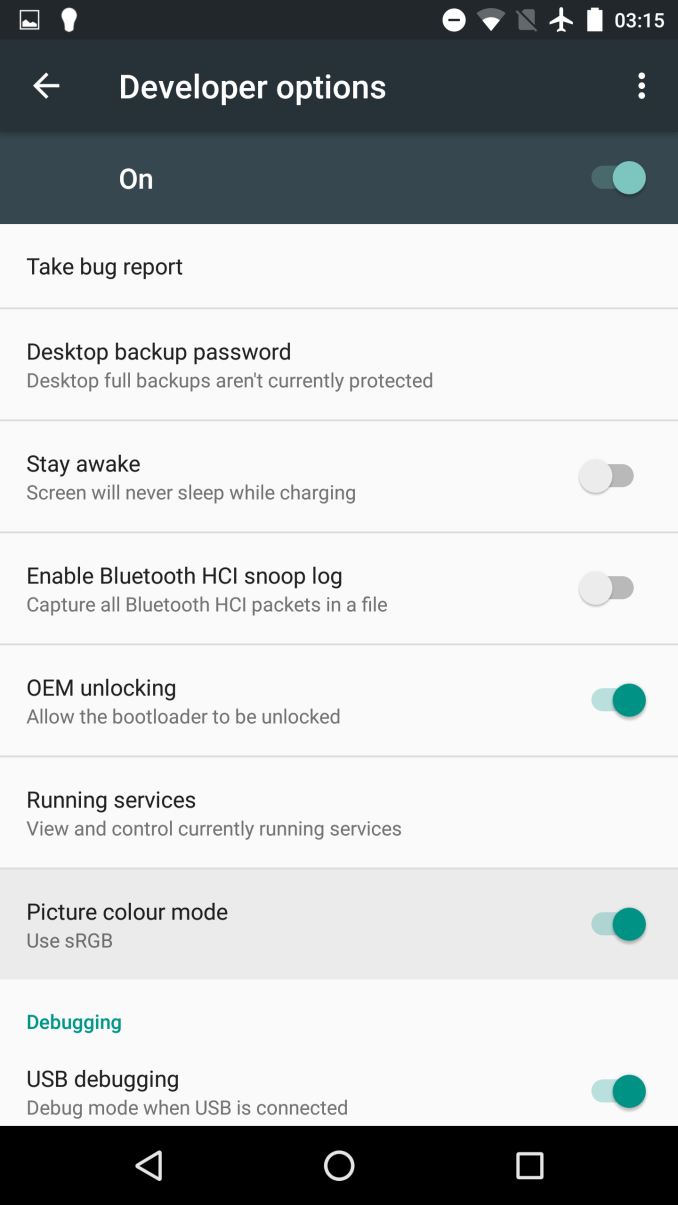 Before getting to the results, I'd like to mention that I tested both the device's default colour calibration as well as its sRGB calibration. This setting is rather hidden for the average user: You have to enable the developer options menu by tapping repeatedly on the "Build Number" found in Settings => About Phone, after which the menu will appear under the global settings menu. It's a pity that Google didn't make this option more accessible via the general display settings, but it will be required to access if you care about accurate colour reproduction on the Nexus 6P.

We start by measuring the maxium brightness of the 6P. As always, our display testing is done with an X-Rite i1Pro 2 spectrophotometer as our measurement hardware, in conjunction with SpectraCal's CalMAN software suite and our own workflow to be able to get an accurate display characterization. 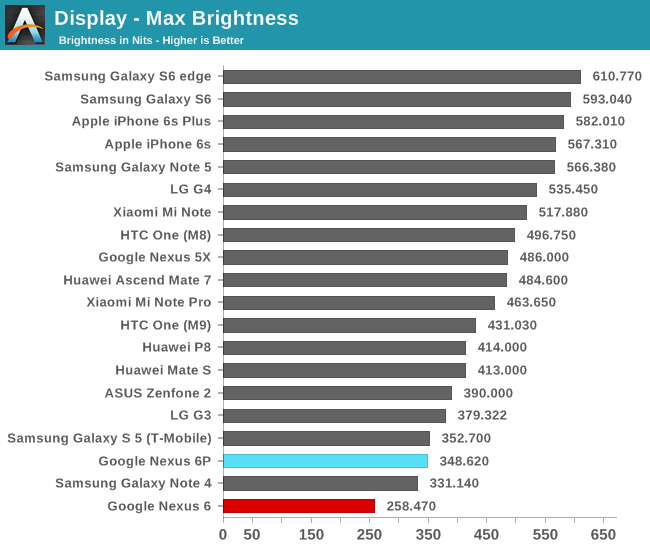 The Nexus 6P manages to drive the screen at up to 348nits, a quite satisfactory level of brightness that matches the Note 5’s characteristics. Unlike Samsung’s devices, it seems the Nexus 6P has no overdrive function which vastly increases the luminosity under high ambient light and auto-brightness. Nevertheless, I’ve had no issues whatsoever in terms with outdoor visibility (Although that’s not a very convincing statement for European winters) as the screen offers excellent contrast.

While still on the topic of brightness, I was actually disappointed to discover that the device’s software is set up so that the brightness slider bottoms out at 8.5 cd/m². While doing the power curve measurements I discovered that the panel and driver is actually able to go down as low as 1.5 cd/m², making this one of the rare devices whose panel can go that low. I’ve become accustomed to using phones at around 2 nits at night and in bed, so 8 nits was suddenly brighter than I wished for. Changing the minimum value of the stock brightness slider wouldn’t be a very complicated task so I hope Google considers this for future maintenance releases.

Edit: After further testing I discovered that it's possible to get to 1.5 cd/m², but only if Adaptive Brightness is enabled and one is located in a dark environment, as brightness without AB offsets the range of the brightness slider. 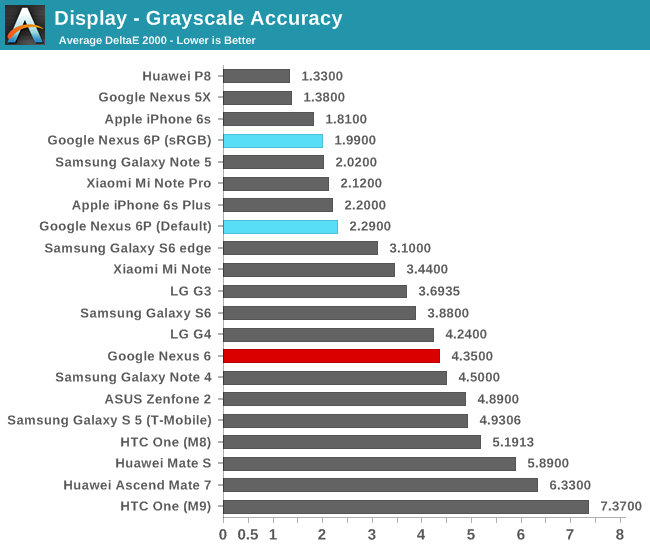 Moving on to the greyscale accuracy tests, we see the Nexus 6P behave very well. At a dE2000 of 1.99 the 6P lands as one of the best devices in terms of accurately reproducing greyscale content. There is however one problem, and that’s the average gamma of 2.41. This causes content to be darker than what it’s supposed to be and also has the effect of making colours seem more saturated. The default colour calibration doesn't differ very much from the calibrated sRGB norm, as it shows only a slight disadvantage with a dE2000 of 2.29. 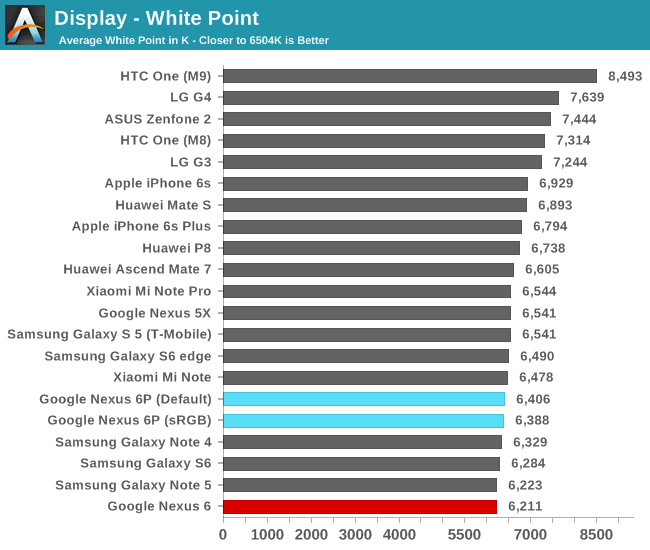 In terms of colour temperature, the 6P is slightly on the warm side as it comes at 6388K at 200cd/m². The latest generations of AMOLED screens seem for some reason to always slightly undershoot the target D65 (6500K) white, making the screen just slightly warmer than it should be. 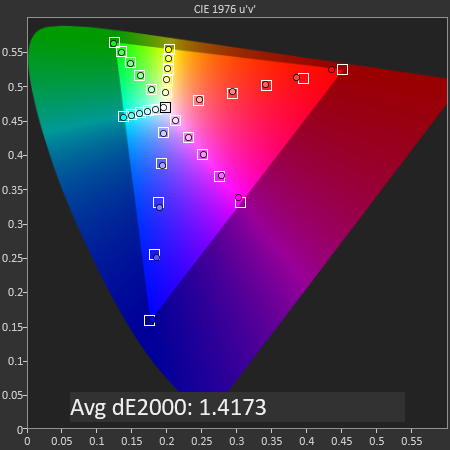 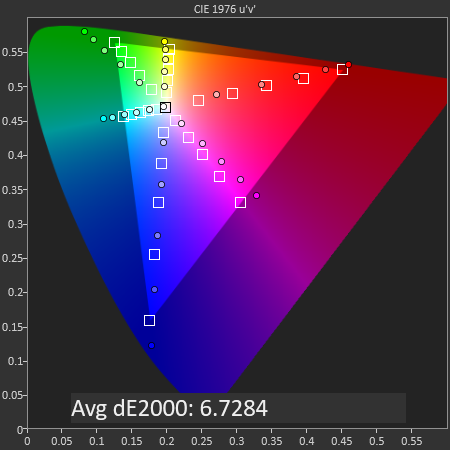 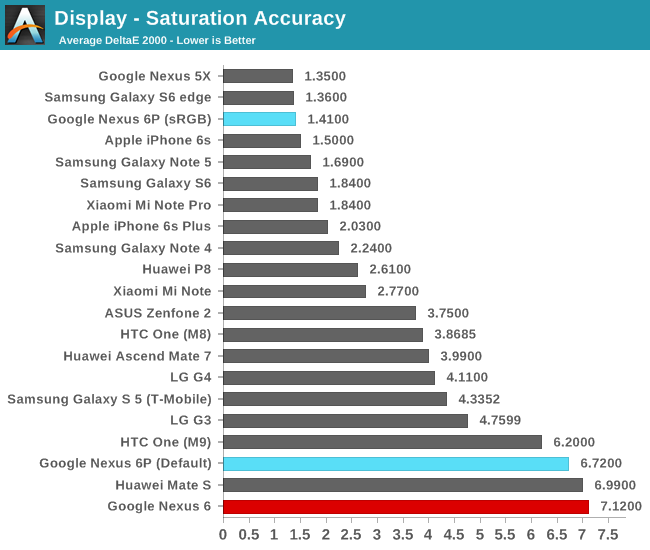 Moving on to the saturation accuracy measurements, we’re presented with some outstanding numbers from the sRGB mode as the 6P manages to deliver an excellent dE2000 of 1.41. At these accuracy levels I would argue that manufacturers would need to resort to individual device colour calibration to be able to provide even better results, as for example even by manually calibrating my own daily driver I wasn’t able to surpass a dE lower than 0.95. Unfortunately the default mode just fares little better than last year's Nexus 6, making for some very saturated colours. I tried to match the reproduced gamut against several standards but I didn't find anything that resembles the Nexus 6P's default mode, meaning this is not an AdobeRGB or DCI large gamut calibration. 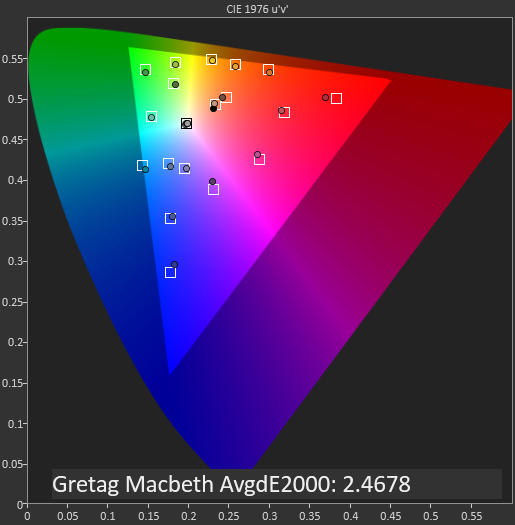 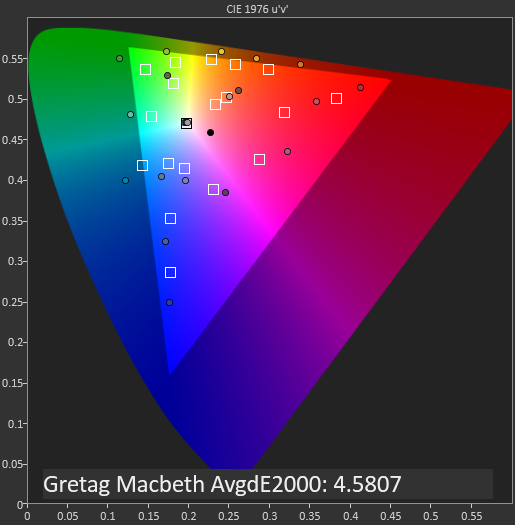 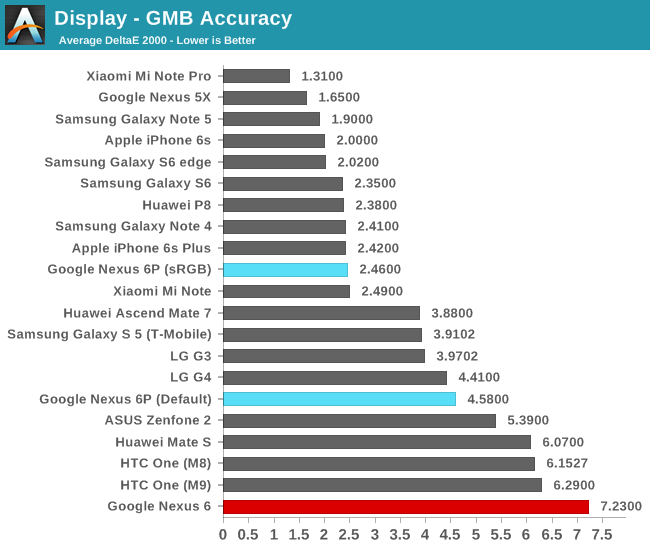 Moving onto the Gretag MacBeth set of commonly encountered colours we see the Nexus 6P fall behind when compared to its excellent greyscale or saturation results. Because the gamma on the 6P’s screen is too high, it causes the luminosity component of colours to be lower and thus, as can be seen in our comparison strip, they will appear darker and slightly more saturated than they should.

On the default settings the GMB accuracy is farther off as expected. There's not much to say here as it's a deliberately inaccurate mode that gives higher priority to vibrant colours as opposed to accuracy.

Overall the Nexus 6 screen ranks among one of the best. It’s a bit of a pity that the gamma calibration was slightly off under the sRGB profile but otherwise the 6P excels in all other metrics. Samsung currently offers the best quality displays and Google and the Nexus 6P takes full advantage of that fact.

While we can safely declare that the Nexus 6P offers excellent image quality in its display, one aspect that hasn’t been characterised as much in the past was the power consumption and the resulting luminance efficiency. The Nexus 6 suffered from a quite inefficient panel that resulted in a battery runtime that was lower than expected from a device of its configuration. I was quite worried when I saw that Huawei chose a quite inefficient AMOLED screen for the Mate S, as that proved to be a double-edged sword for the device, as it also offered great image quality but at a great cost in power efficiency.

For the Nexus 6P, getting an accurate power curve for the screen was exceptionally hard as the fuel-gauge of the PMI8994 power management IC of Snapdragon 810 devices updates only rarely and therefor becomes unusable for many power measurements. So to properly characterize the power draw at increasing brightness without spending several hours for each measurement point I hooked up my measurement equipment to the USB power of the 6P. Once a phone’s battery cell is fully charged it will usually switch to be fully powered by the power supplied by the connector as long as it’s able to provide sufficient power. The downside of this method is there’s a significant unknown delta due to the inefficiency of the PMIC converting the input 5V to the system’s internal 3.3V. Nevertheless with some help of some test measurements via the internal fuel gauge I was able to compensate for this difference, which gives us the following power curve: 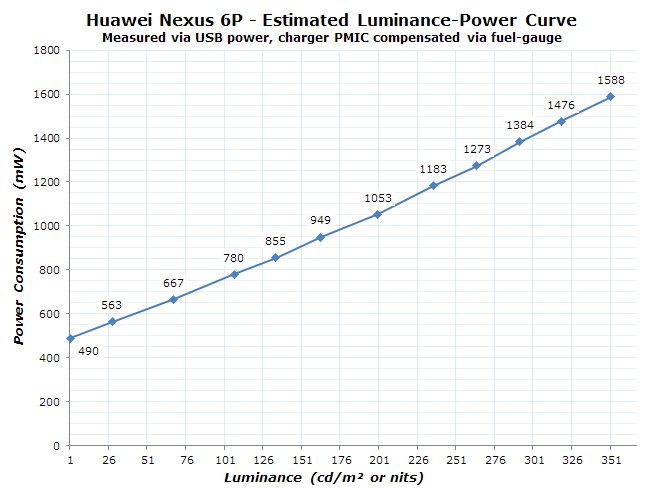 The Nexus 6P seems to have a base power consumption of around 450mW with a fully black screen, meaning no pixels are powered. This comes in to be similar to what we’ve measured on the Note 4 Exynos, but is still about ~100mW higher than devices featuring more efficient SoC platforms. At maximum brightness, the device consumes about 1.59W, a tad under the 1.7W that the Note 4 used. Some readers might already figure out where I want to go with this, as there’s been plenty of discussion and questions in regard to the efficiency of the panel that will be employed on the Nexus 6P.

At a 200nits and a luminance power of around 615mW, the Nexus 6P’s panel falls in between the Note 4 and the Note 5’s/Galaxy S6’s in terms of efficiency. We can’t clearly attribute any certain emitter generation to the device, but it looks to be about 5% more efficient than the Note 4’s but still a considerable 16% less efficient than the Note 5. It was starting with the Galaxy S6 that I’ve considered AMOLED screens to no longer be in at a disadvantage to LCDs when it comes to efficiency in every-day use-cases. Since the Nexus 6P falls behind that it means we should expect slightly less run-time than comparable LCD devices. Let’s continue on to the battery life results to verify this assessment.