We first got wind of the desknote computer configuration three months ago when we took a look at the ECS i-Buddie 4. It was then that we initially expressed our excitement over the concept of having a desktop machine in the amount of space normally reserved for laptops. In fact, the largest complaint we have had about desknote systems is the graphics solutions that they employ; usually low-end integrated graphics chips. We initially suggested that perhaps an nForce chipset would make for a good desknote solution, but clearly a high-end discrete graphics chip would be even better. Unfortunately, desktop graphics chips were not designed to work well in the confides of a notebook system and mobile graphics chips were not designed to work without batteries.

ATI is no fool for jumping onto the desknote bandwagon. The concept has been met with wide praise from users, who pay less for a portable system, to OEMs, who make larger profits by using desktop parts. Just ask ECS, a motherboard company who turned the idea of a desknote system into what has become their most profitable product. People are buying these systems and if ATI has its way we will find the Mobility Radeon 9000 at the heart of many desknote computers. 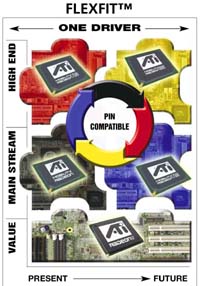