There are actually going to be five versions of the Mobility Radeon 9000 floating around out there. All are based on the RV250 core but distinguish themselves in terms of configuration, clock speed, and memory bus width.

Finding space and making traces for external video memory is not an easy task in the cramped confides of a notebook. Previously, video processor manufacturers dealt with these problems by including on die memory. This served to lessen the headaches encountered when dealing with external memory solutions but introduced new problems into the actual chip production.

Due to size constraints there is only a limited amount of video memory that can be integrated onto a chip's die. Even a fairly small amount of integrated memory creates a large die that results in higher chip prices and higher failure rates. It is for this reason that mobile graphics chips with on die memory are typically only used in specific mobile systems where space is at the largest premium and fast 3D performance is not necessary (as the chips are usually limited to, at most, 16MB of on die memory).

The solution to this problem that both ATI and NVIDIA have come to was only made possible recently with the release of BGA memory. Thanks to BGA memory's small package size, on chip memory solutions have become not only possible but fairly easy to create. The process involves mounting the GPU and the BGA memory on the same substrate, with the GPU core going on the bottom and the memory going on the top. 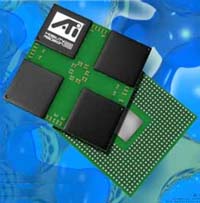 The memory on chip Mobility Radeon 9000.

With ATI's announcement that memory on chip Mobility Radeon 9000's will be shipping in notebooks next week, the company seems to be the first to actually be shipping an integrated memory video product for the mobile market. This is because NVIDIA's MAP chips have yet to find their way into shipping notebooks as far as we can tell. 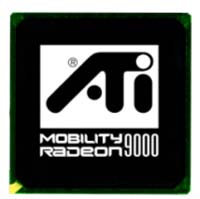