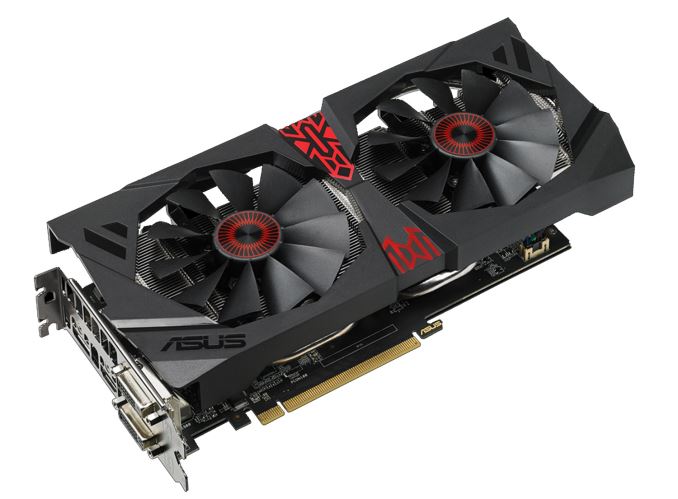 Last week AMD launched the Radeon R9 380X, the company’s latest mid-range video card. Based on a fully enabled GCN 1.2 Tonga GPU – a first for the desktop video card market – the R9 380X was timed to setup AMD product stack for the holidays and to dig out a spot in the gap between NVIDIA’s GeForce GTX 970 and GTX 960 cards. By hitting NVIDIA a bit above the ever-popular $200 spot, AMD is aiming to edge out NVIDIA on price/performance while also snagging gamers looking to upgrade from circa 2012 video cards.

In AMD’s overall product stack the R9 380X is essentially a slightly faster version of the existing R9 380, designed to offer a bit more performance for a bit higher price. With R9 380 AMD went head-to-head with NVIDIA’s GeForce GTX 960, launching at $200 for 2GB cards while also offering a sizable mix of 4GB cards. For the R9 380X AMD is enabling the last 4 of Tonga’s disabled CUs and making 4GB the baseline, which improves performance by 10% or so. In turn the new card is launching at $229, the only card that at official MSRPs is really aimed at the $200-$250 market.

Recapping the specifications, the R9 380X is very straightforward card. Rather than R9 380’s 28 CUs, all 32 CUs are enabled for R9 380X. As this was the only thing disabled on R9 380, this means that the increased stream processors and texture resources are the only material GPU change as opposed to the R9 380. Otherwise we’re still looking at the same 32 ROPs backed by a 256-bit memory bus, all clocked at 970MHz. 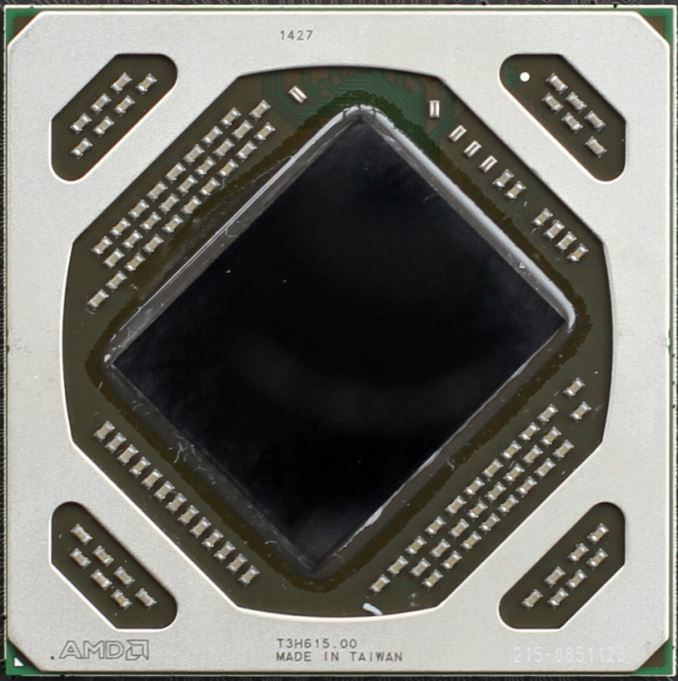 Meanwhile as far as memory goes, the R9 380X sees AMD raise the default memory configuration from 2GB for the R9 380 to 4GB for this card. We’ve reached the point where 2GB cards are struggling even at 1080p – thanks in large part to the consoles and their 8GB of shared memory – so to see 4GB as the base configuration is a welcome change. R9 380 does offer both 2GB and 4GB, but as one might expect, 2GB was at launch (and still is) the more common SKU that for better or worse makes R9 380X stand apart from its older sibling even more. Otherwise the 5.7Gbps memory clockspeed of the R9 380X is a slight bump from 5.5Gbps of the 2GB R9 380, though it should be noted that 5.7Gbps was also the minimum for the 4GB R9 380 SKUs. So in practice just as how there’s no increase in the GPU clockspeed, there’s no increase in the memory clockspeed (or bandwidth) with 4GB cards.

Similarly, from a power perspective the R9 380X’s typical board power remains unchanged at 190W. In practice it will be slightly higher thanks to the enabled CUs, but otherwise AMD hasn’t made any significant changes to shift it one way or another. This also means that most (if not all) retail cards are minor variations of each partner's existing R9 380 4GB design, as they don't need new memory or power delivery circuitry to handle R9 380X.

From a performance perspective then the R9 380X is not a very exciting card. After 3 releases of the fully enabled Tahiti GPU – Radeon 7970, 7970 GHz Edition, and R9 280X – the architectural and clockspeed similarities of R9 380X mean that it’s essentially a fourth revision of this product. Which is to say that you’re looking at performance a percent or two better than the 7970, well-tread territory at this point. In a sense then the R9 380X is a de-facto $229 7970, with an extra 1GB of memory.

The R9 380X’s principle reason to exist at this point is to allow AMD to refresh their lineup by tapping the rest of Tonga’s GPU performance, both to have something new to close out the rest of the year and to give them a card that can sit solidly between NVIDIA’s GeForce GTX 970 and GTX 960. That AMD is launching a fully enabled Tonga card now is somewhat arbitrary – we haven’t seen anything new in the $200 to $500 range since the GTX 960 launched in January and AMD could have launched it at any time since – and along those lines AMD tells us that they haven’t seen a need to launch this part until now. With the R9 380 otherwise shoring up the $199 price point until more recently, there’s always a trade-off to be had with having better positioning than the competition versus having too many products in your line (with the 300 + Fury series the tally is now 9 cards). 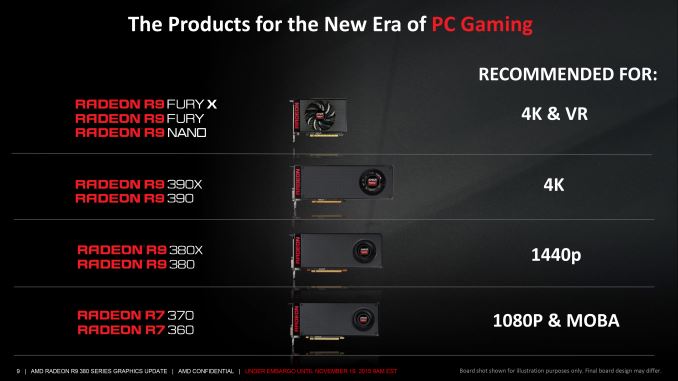 In AMD’s new lineup the R9 380X slots in between AMD’s more expensive R9 390 and the cheaper R9 380. AMD is promoting this card as an entry-level card for 2560x1440 gaming, though with the more strenuous games released in the last 6 months that is going to require some quality compromises to achieve. As it stands I’d consider the 390 more of a 1440p card, while the R9 380X is better positioned as AMD’s strongest 1080p card; only in the most demanding games should the R9 380X face any real challenge.

As far as performance goes then, the R9 380X is about 10% faster than the 2GB R9 380 at 1080p, with the card taking a much more significant advantage in games where 2GB cards are memory bottlenecked. Otherwise the performance is almost exactly on-par with the 7970 and its variants, while the more powerful R9 390 has a sizable 43% performance advantage thanks to its greater CU count, memory bandwidth, and ROPs. This makes the R9 390 a spoiler on value - it's 43% more powerful for a price premium of 26% - though its final $290+ price tag ultimately puts it in its own class. Or to throw in a quick generational comparsion to AMD's original $250 GCN card, Radoen HD 7850, you're looking at a 75% increase in performance at this price bracket over 3 years.

Looking at the actual cards that have launched so far, most of the partners have reused their R9 380 designs, which is fitting given the similarities between the two cards. Meanwhile as Tonga has some headroom for the partners to play with, many of the R9 380X cards being sold include at least a minor factory overclock, even those cards being sold at MSRP. Ultimately baseline cards and cards with smaller overclocks start at $229, while cards with more significant OCs start at $239 – a $10 premium. The one exception to this in North America happens to be the card AMD sampled us for today's review, ASUS's STRIX R9 380X, with the base version retailing at $239 while the OC version retails at $259.

As for the competition, as I previously mentioned AMD will be slotting the R9 380X in between the GeForce GTX 970 and GTX 960. The GTX 970 quite a bit faster but also quite a bit more expensive then the R9 380X - though still a bit of an overall spoiler like the R9 390 - while the R9 380X will pass the 2GB GTX 960, albeit with a price premium of its own. At this point it’s safe to say that AMD holds a distinct edge on performance for the price, as they often do, though as has been the case all this generation they aren’t going to match NVIDIA’s power efficiency.