Professional testing requires the emulation of real-world situations but with repeatable results; thus, a perfectly controllable test setup and environment are required, especially for comparable results. Testing the thermal performance of any case with a typical real-world setup technically limits the comparability of the results to this setup alone, as an active system interacts with its environment and the change of a single component would alter myriads of variables.

For that reason we have developed synthetic loads that emulate the thermal output of real systems, allowing us to test with a passive, steady, and quantifiable thermal load. As such, the thermal testing now displays the thermal capabilities of the case alone, as if it would have to deal with the entire thermal load by itself, regardless of the system that would be installed inside it. Laboratory data loggers are being used to monitor the PT100 sensors and control the safety relays, which are fully accessible via our custom software. The Mini-ITX version of our thermal load simulates a 150 W CPU, 30 W VRM, 20 W RAM and 1 × 120 W GPU card thermal load. For low-profile card setups, we are using a 50 W dummy GPU card instead. Finally, 2.5" and 3.5" HDD dummy loads have also been created, which produce 15 W and 30 W of heat respectively. Overall this setup allows us to scale the total thermal load over a wide range from low to high, and at the highest load only the best of cases will be able to handle it for more than a few minutes.

For the full power test we are using the aforementioned configuration, with the full-size 120W PCIe card plus one 3.5" load and two 2.5" loads. The low load test reduces the main system's power output down to about 42% (132 Watts total), but the disk loads remain unchanged.

Noise testing has been performed with a background noise level of 30.4dB(A). Advanced noise testing is also being performed in order to assess the ability of the case to dampen the noise of the components installed inside it. This includes the installation of two noise-generating sources (strong fans) inside the case, with one positioned roughly over the first expansion slot while the other is over the CPU area, which combined generate ≈ 44.2 dB(A) of noise when unobstructed. During the advanced noise test, all stock cooling options for the case are disabled.

Unfortunately we've only used the latest iteration of our case tests on a handful of Mini-ITX cases, so we cannot make extensive comparisons. That said, we can easily determine that the thermal performance of the Cougar QBX is significantly better than that of very small ITX cases, such as the SilverStone Milo ML05, as the QBX has both superior cooling and over twice the size. Even with the slow stock 92 mm fan, the QBX appears to be capable of maintaining reasonable operational temperatures with a 380 Watt thermal load inside. 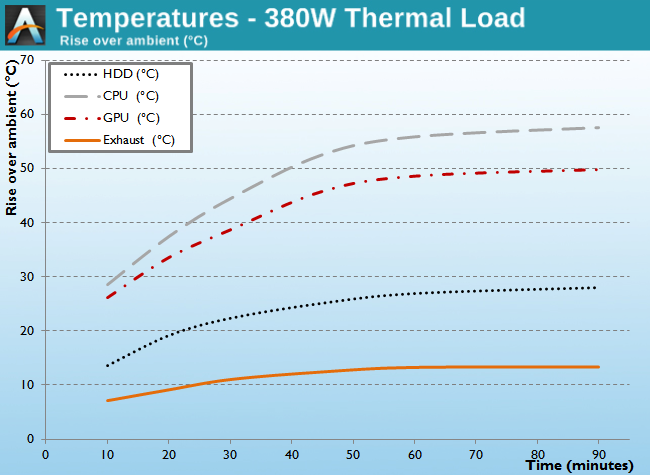 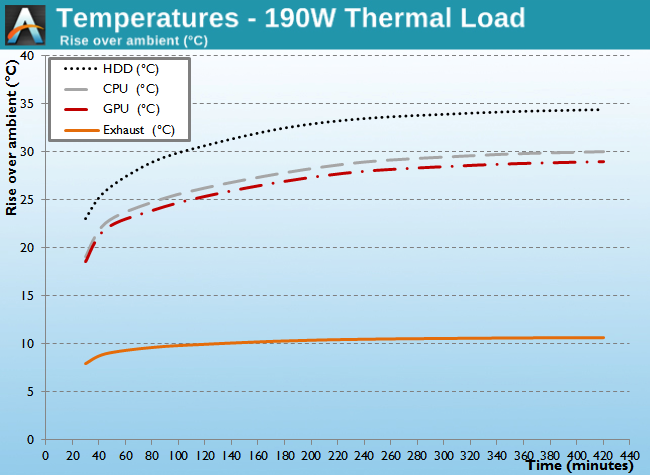 Still, the design of the QBX is not without it weak points. Our test results clearly reveal that the drive cage receives little-to-no additional cooling with just the stock 92 mm fan installed. The drawback becomes especially apparent with our 190W thermal load. In the 190W scenario the drive cage runs some 4 degrees warmer than the CPU despite the significantly smaller thermal load in the drive cage. This is not a major issue since modern drives can put up with this temperature, but it's perhaps not the best environment for a HDD that's constantly writing (e.g. video surveillance). 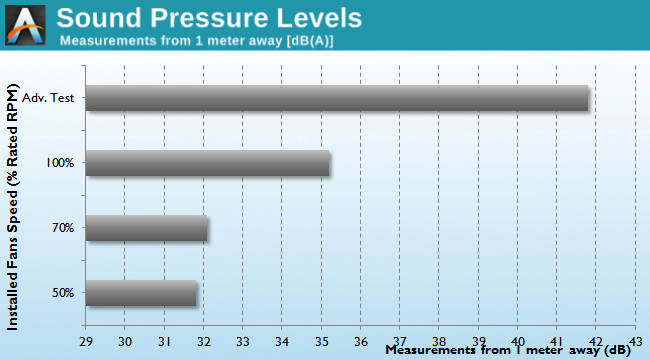 The stock 92 mm fan may not remove a ton of heat on its own, but at the same time it's a very quiet model that remains practically inaudible. Even at its maximum speed, the maximum sound pressure of 35.2 dB(A) is very low and barely noticeable. At those levels the case fan noise will almost certainly be overcome by the noise from the rest of the system, which unfortunately doesn't get dampened much before reaching the user. Due to the many openings in the case, especially to its sides, the Cougar QBX has very limited sound dampening capabilities. With our dummy noise source inside the case we recorded 41.9 dB(A) of noise from the outside. The difference of 2.3 dB(A) is measurable and perhaps noticeable by some people, but only just. Practically speaking I don't expect very many users to pick up on such a small increase.