The number of users that use their tablet as their primary camera is far larger than anyone ever could have predicted when the tablet market was emerging. However, there are some obvious reasons why someone would opt for their tablet. It may actually be the best camera they own, and older users with aging eyes can definitely appreciate the fact that their tablet display turns into a giant high resolution viewfinder. The cameras themselves have also improved significantly from the dark days of the 1.2MP rear camera on the iPad 2.

Since the Tab S2 is extremely thin, Samsung has needed to allow for a camera hump in order to fit their 8MP sensor. The hump isn't very large, and although it's larger than that of the iPhone 6, it's not near as large as the camera hump on the Galaxy S6. It's honestly not really an issue, but some customers who are very serious about the design of their devices may take issue with it.

Below you can view the known specifications of the Tab S2's rear and front-facing cameras. Unfortunately I don't have data on the specific model of the rear-facing sensors used in the original Tab S series, so that info is omitted on the chart.

While Samsung hasn't made any radical changes to the camera sensor specifications with the Tab S2, they have significantly widened the rear-facing camera's aperture. Changes to image processing and ISP improvements will also have an enormous impact on image quality.

As always, my photo testing begins with a scene during the day, followed by that same scene at night to test low light performance. While the low light test is still pretty brutal on current tablets, it's a very good indicator of the quality of an OEM's image processing. 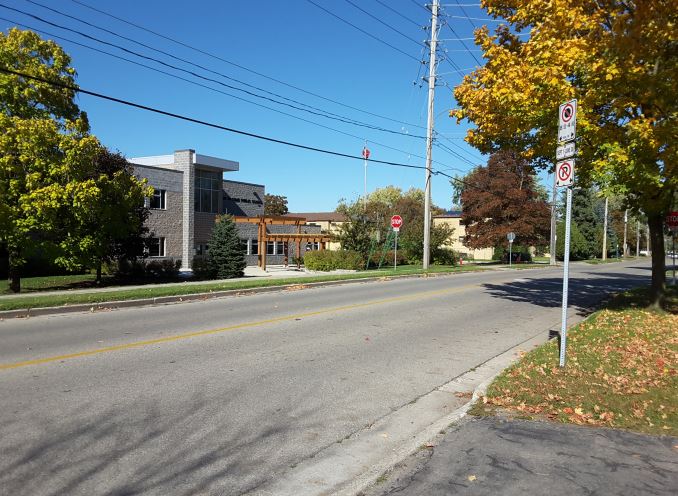 During the day the Tab S2 performs very well. Detail is on par with the iPad Air 2, which isn't surprising given the similar sensors and Samsung's large improvements in image processing quality this year. My only complaint is that there is a bit too much sharpening going on which exacerbates the artifacting on the wall of the building caused by the limited effective resolution of the camera system. What's interesting is that the Galaxy S6 Edge processes the image with less sharpening, which is likely intentional on Samsung's part as the S6 has a much larger sensor with a higher resolution. Overall, I'm happy with the Tab S2's camera quality, and I'm glad Samsung decided to give the tablet a bit of a camera hump instead of crippling the camera quality to fit in the 5.6mm profile of the chassis. 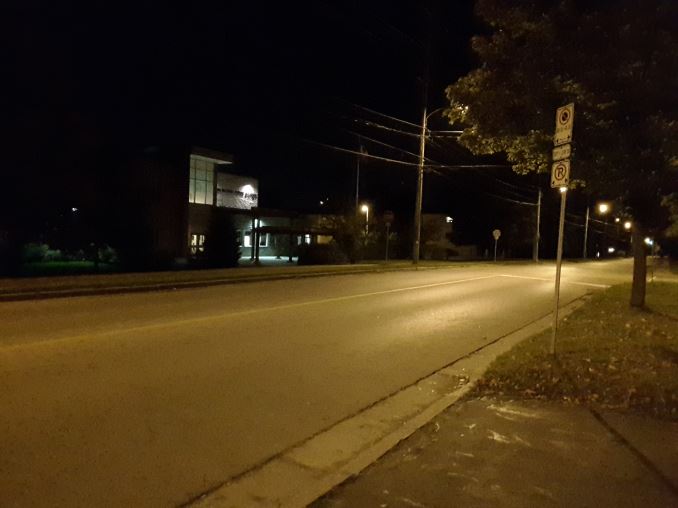 Low light photography is where I started to have some issues taking photos with the Tab S2. For some reason it simply refused to run the autofocus, and I had to try and manually focus by tapping which is difficult on such a large device. Once I was able to focus and take the shot I took a few, and the best result is the one you see above. For a tablet it's actually a pretty good photo, although as you can see from the street lamps the photo is definitely overexposed to a degree. Compared with the iPad Air 2 there's actually not much more visible in the frame despite the overexposure, and the Air 2 has a better rendition of the grassy patch on the right side as well as the no parking sign. Both photos are still very good as far as tablets go, but I do think the iPad wins out by a little bit because of the exposure and slightly better detail preservation.

The Tab S2 can record video at 1080p30, and also at 1440p30 although the latter disables video stabilization and so I've opted to just use the 1080p recording mode. Looking back at all the tablets I've evaluated, it's clear that the Tab S2 has the best video recording quality by far. It's definitely not perfect, with some jiggle to the frames caused by the EIS and a bit too much saturation to the colors, but the overall quality, sharpness, and consistency of the frame rate is better than any other device I've tested.

Like the original Tab S, the Tab S2 ships with a 2x2 802.11ac WiFi implementation. I actually haven't been able to track down exactly which WiFi chipset they're using, which is unfortunate. The original Tab S actually had strangely slow WiFi performance given its peak theoretical bandwidth of 866Mbps, and I was hopeful that the Tab S2 would fare better. 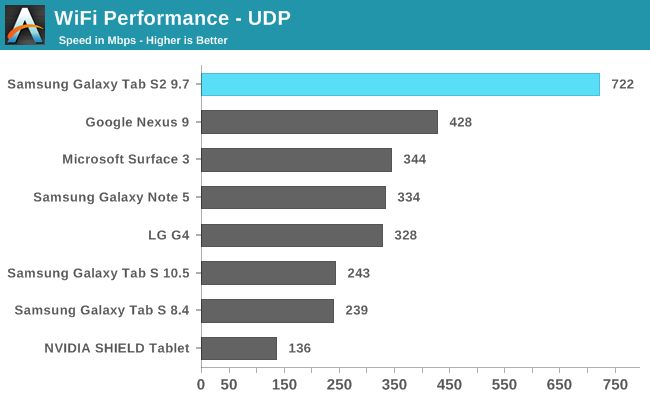 As you can see, the WiFi performance on the Tab S2 is miles ahead of the previous models, and ends up having the highest peak bandwidth on record for a mobile device. Samsung did a great job improving on last year's WiFi implementation, and if there's going to be any bottleneck over WiFi it's not likely that t it will be the Tab S2.