An obvious application for the XP4 is the mobile market and it will be only a matter of months before the XP4 is announced in its first mobile home. The mobile XP4 will be very similar to the desktop solution but most likely running at a 200MHz core clock frequency due to power limitations. 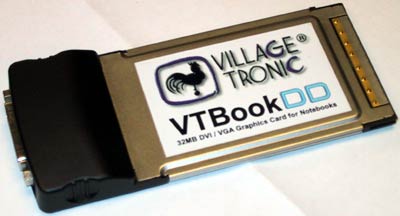 Trident had a PC card design for the XP4, which would allow notebook users to have DVI/VGA output and instant multimonitor support through a simple PC card.

DVI interface through a PC card

The part Trident had at our meeting was based on a XP2 platform but they are confident that the XP4 will work in such a design just as well because of its low power. Granted that the 32-bit Cardbus interface won't provide much bandwidth so the solution wouldn't be good for much other than business applications, but it's still an interesting part.