With the background and context of the benchmark covered, we now dig into the data and see what we have to look forward to with DirectX 12 game performance. This benchmark has preconfigured batch files that will launch the utility at either 3840x2160 (4K) with settings at ultra, 1920x1080 (1080p) also on ultra, or 1280x720 (720p) with low settings more suited for integrated graphics environments.

When dealing with 3840x2160 resolution, the GTX 980 Ti has a single digit percentage lead over the AMD Fury X, but both are above the bare minimum of 30 FPS no matter what the CPU. 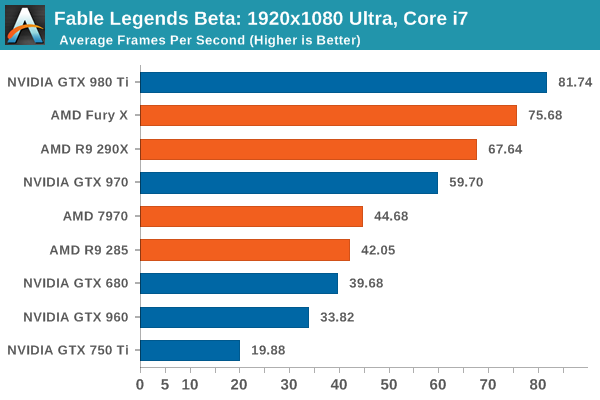 When dealing with the i5 and i7 at 1920x1080 ultra settings, the GTX 980 Ti still has that single digit percentage lead, but at Core i3 levels of CPU power the difference is next to zero, suggesting we are CPU limited even though the frame difference from i3 to i5 is minimal. If we look at the range of cards under the Core i7 at this point, the interesting thing here is that the GTX 970 just about hits that 60 FPS mark, while some of the older generation cards (7970/GTX 680) would require compromises in the settings to push it over the 60 FPS barrier at this resolution. The GTX 750 Ti doesn’t come anywhere close, suggesting that this game (under these settings) is targeting upper mainstream to lower high end cards. It would be interesting to see if there is an overriding game setting that ends up crippling this level of GPU. 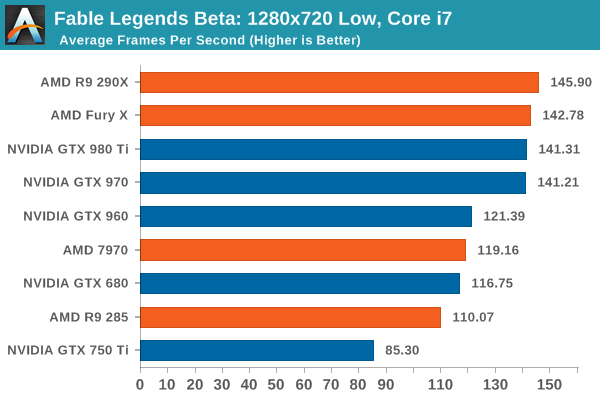 At the 720p low settings, the Core i7 pushes everything above 60 FPS, but you need at least an AMD 7970/GTX 960 to start going for 120 FPS if only for high refresh rate panels. We are likely being held back by CPU performance as illustrated by the GTX 970 and GTX 980 Ti being practically tied and the R9 290X stepping ahead of the pack. This makes it interesting when we consider integrated graphics, which we might test for a later article.  It is worth noting that at the low resolution, the R9 290X and Fury X pull out a minor lead over the NVIDIA cards. The Fury X expands this lead with the i5 and i3 configurations, just rolling over to the double digit percentage gains.