The Mate S's Kirin 935 is an octa-core big.LITTLE SoC with Cortex A53's employed in both clusters. The faster cluster clocks in at 2.2 GHz, representing a theoretical 10% increase in performance over the Kirin 930 in the P8. We expect the same limitations in performance as found on the P8, as even at such high clocks, ARM's in-order CPU architecture meant for power efficiency just isn't powerful enough to compete with the larger cores found in competing flagship devices. 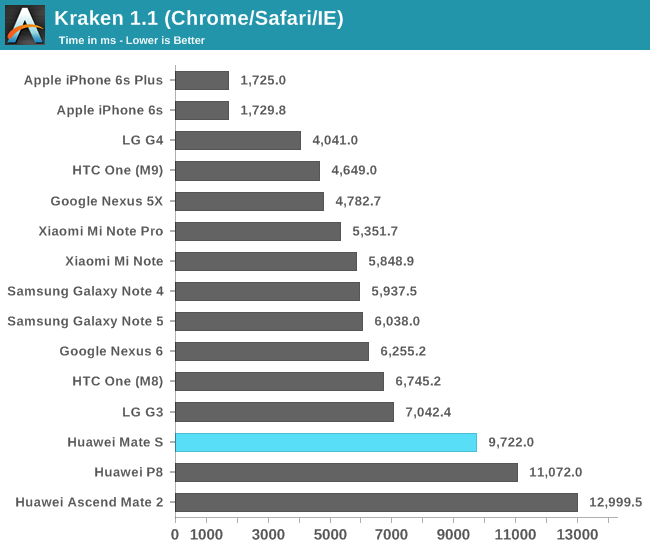 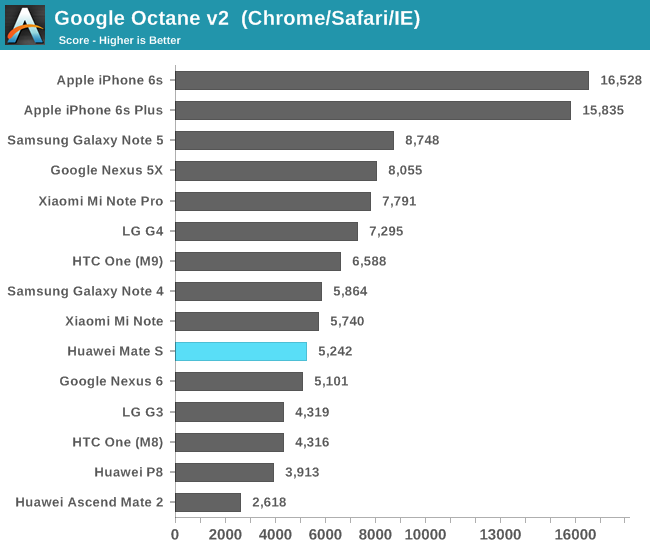 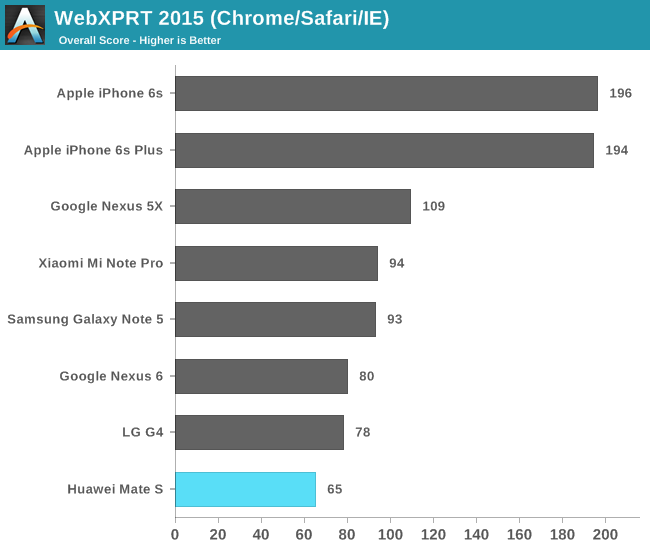 In Kraken and Octane, we discover the expected performance improvement due to the increased clocks. Also as expected, we don't see the Mate S being able to compete with more powerful SoCs. It's interesting to see the A53 inching in on Qualcomm's Krait-based SoCs in some of the tests, this is due to the fact that the Krait architecture's IPC isn't all that higher than an A53 but manages to perform well due to the high clock speed.

Next we move on to PCMark, FutureMark's Android benchmark suite. I've actually been quite happy with PCMark as a benchmark as it's one of the rare benchmark tools out there which actually do manage to deliver on their promise of being representative benchmarks. 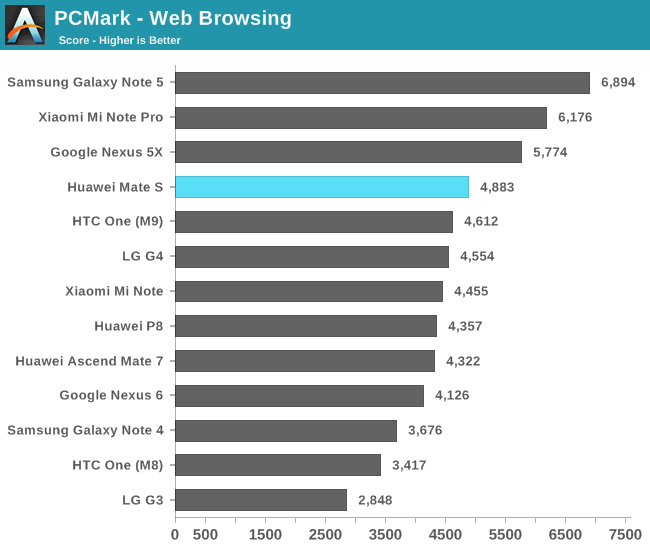 Starting with the web browsing sub-test, the Mate S doesn't end up all that badly. This is due to web-browsing being rarely able to trigger full performance states of more advanced SoCs. Instead it's more about burst loads where latency is more important, and here Huawei's HMP scheduler and CPU governor on the big cores is set up aggressively to directly take advantage of the maximum 2.2GHz performance state where as other devices would scale up more conservatively (And thus might miss the critical load time-window). 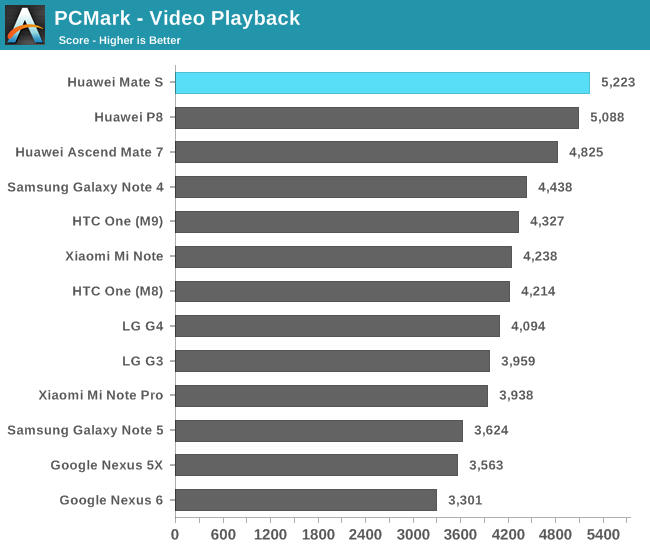 The video sub-test is a test of the hardware decoder latency and performance as well as NAND storage performance as the video test quickly seeks through the test video. The Mate S, similarly to the P8, performs very well here. Oddly enough we've seen a large degradation in performance with a lot of devices when they switched over from KitKat to Lolipop, but it seems Kirin SoCs were not affected by this OS degradation. 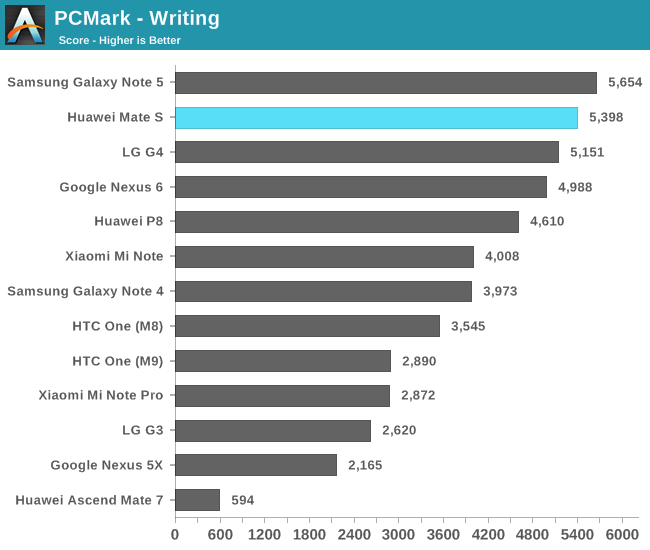 The writing sub-test is again an interesting sub-test as it's extremely sensible to optimizations of the Android virtual machine. We've seen some large jumps in performance across many devices when 5.0 Lolipop introduced ART (Android RunTime) over a year ago. The Mate S here again performs well in the benchmark due to the fact that even though its maximum performance lays well under competing devices such as the Note 5, it's still able to hold up its own its own thanks to the very aggressive DVFS scaling of the big CPU cluster. 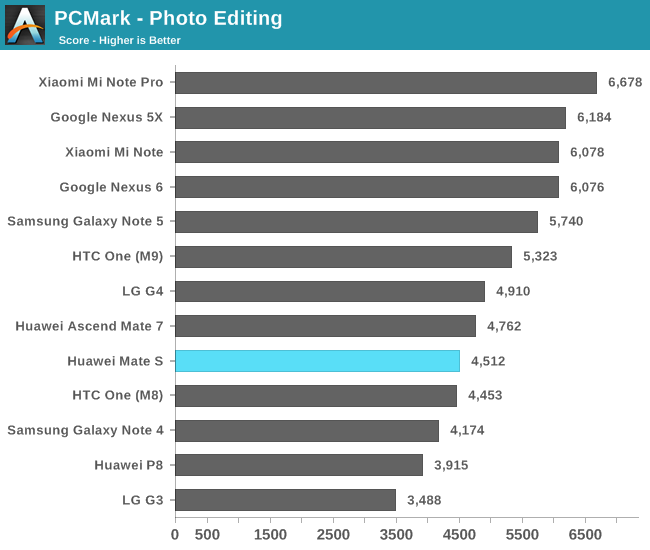 The Photo test is a computational performance test that takes advantage of RenderScript and thus, if the driver allows it, is able to offload loads onto the GPU. The Mali T628MP4 of the Kirin 935 performs adequately but can't compete against the larger Snapdragon and Exynos configurations. It's nice to see that the Mate S performs better than the P8 here, something that may be attributed to newer Mali drivers on the Mate S. 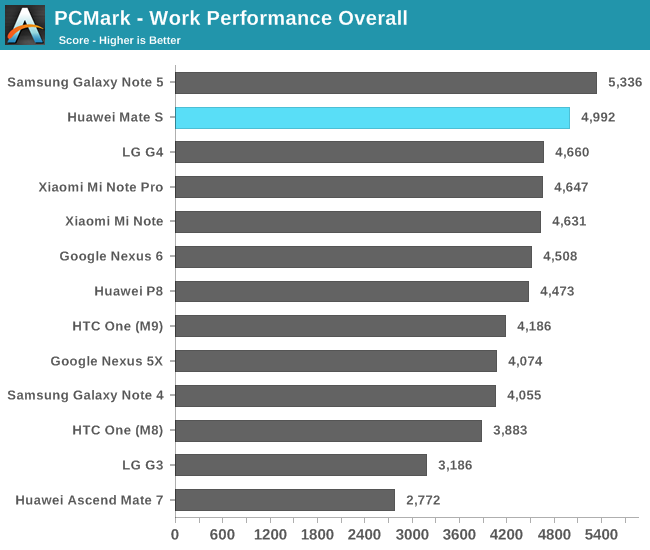 Overall, the Mate S's performance in PCMark ends up quite high. And this is mostly true for every-day performance of the device as it's only on web-page rendering or on application loadings where you do notice that it is slower than competing devices.

We move on to Basemark OS II 2.0, another benchmark that is supposed to test overall system performance. 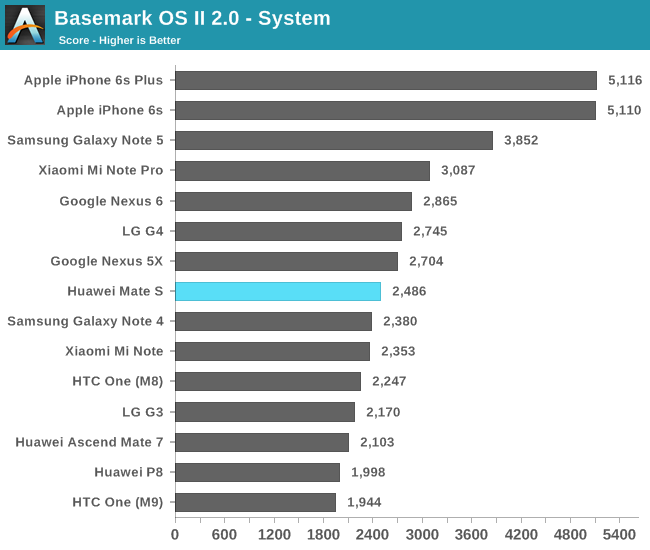 In the System sub-test the Mate S falls inbetween devices which use A57 CPUs such as the Snapdragon 810 and Exynos 7420, and older Krait or A15-based devices. Basemark's system test is much more limited by raw performance of the SoC and thus represents more heavy workloads. It's interesting to see though that the 2.2GHz A53s are still able to hold up against the competition, and the Mate S manages to perform 25% better than the P8, meaning Huawei was able to squeeze out more performance through software optimizations like modifications to the CPU frequency governor. 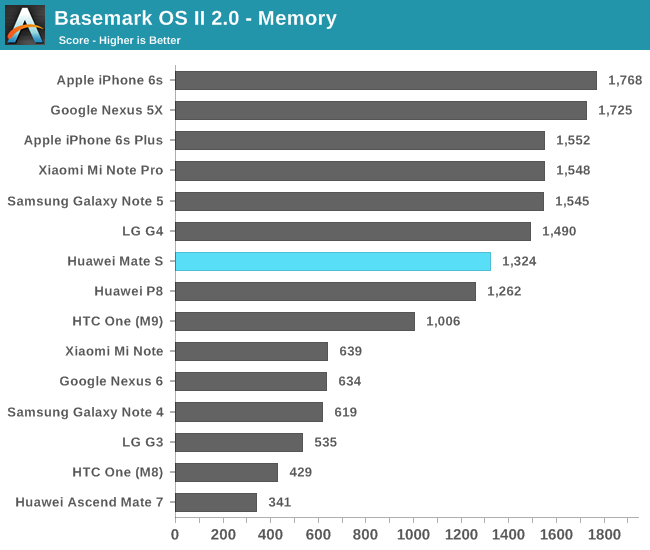 The memory test in Basemark is supposed to be a realistic NAND test on how applications would be affected by storage performance. Again due to the similar eMMC employed, the Mate S ends up close to the P8, and actually not that far off from higher-end flagship devices. 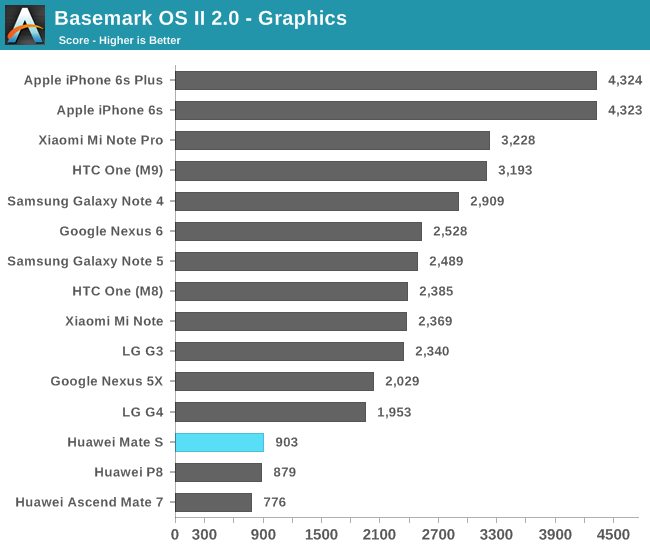 Basemark OS graphics test seems to be very sensitive to Mali GPUs and causes them to perform rather poorly. All recent HiSilicon SoCs end up at the bottom of the chart in this test. 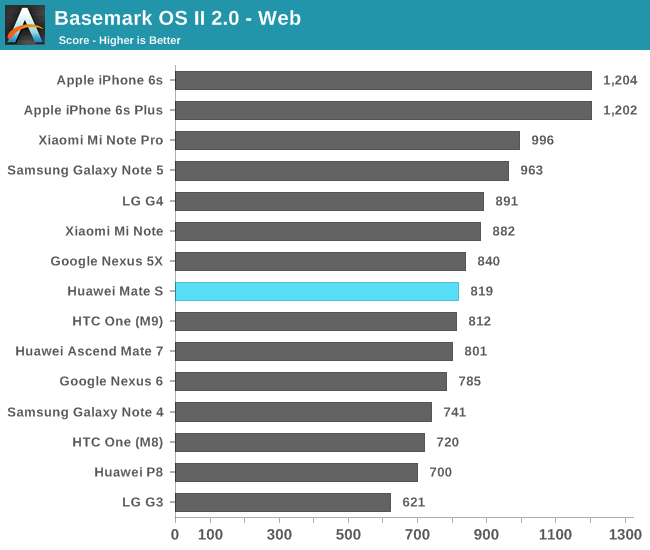 In the web test the Mate S again falls inbetween the more powerful SoC devices and devices from the previous generation. Again, we see the Kirin 935's clock increase and modified DVFS mechanism help it edge out the P8. 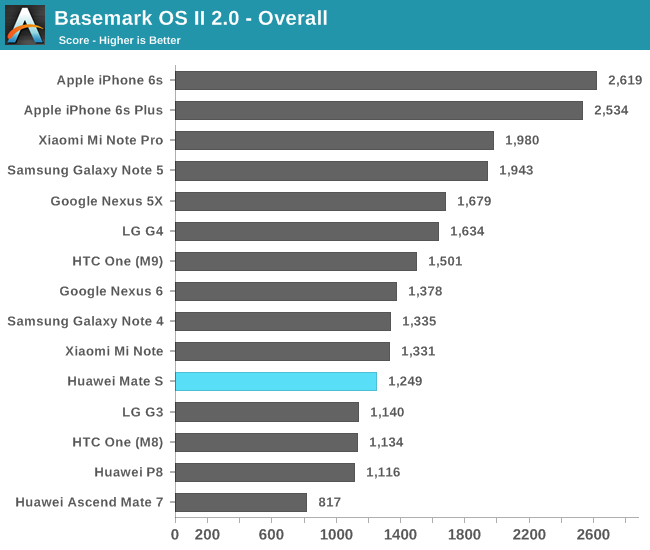 Again due to the sub-standard GPU scores the overall Basemark OS score for the Mate S ends up towards the lower-end of the spectrum.

All in all, the Mate S' daily performance is satisfactory but one shouldn't expect it to be able to keep up with devices with more powerful CPU architectures. I feel like I'm repeating myself here but unfortunately 2015 has been a quite disappointing year in terms of performance advancements for Android devices. Except Samsung and Apple, it seems all other vendors seem to have been forced to come up with sub-par solutions in order to satisfy marketing demands. Both HiSilicon and MediaTek were caught pants-down as they had to rely on rely on A53 designs to power their flagship SoCs, while Qualcomm wasn't able to properly execute their A57 Snapdragon SoCs.