Starting with voltages, let’s see if R9 Nano’s voltages differ much from the other Fiji cards.

The answer, to some surprise, is no. With the ability to run at up to 1000MHz, if the R9 Nano actually makes it there, then it’s going to be operating at 1.2v, not significantly different from the Fury cards.

Of course, outside of a handful of synthetic tests R9 Nano won’t get to operate at 1000MHz due to its strict power limits. To get a better idea of R9 Nano’s full voltage/frequency curve, we went ahead and logged the clockspeeds and voltages of the card while running Crysis 3 in a window, all the while turning down the card’s power limit. Here we started at +40% to sustain 1000MHz on Crysis 3 and went down to -30%. 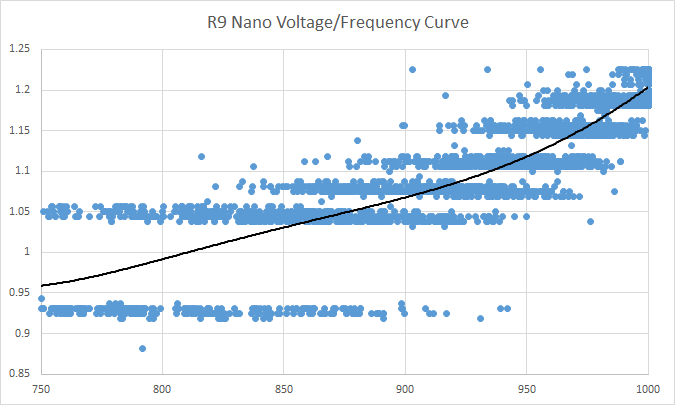 Unfortunately voltage reporting on Fiji cards is very noisy, so what we end up with is a very scattered scatter plot. None the less there is a pattern here, and applying a polynomial best fit to the data, we can see a basic curve. Overall the GPU voltage drops off rapidly from 1000MHz; by 900MHz the average voltage is down to around 1.07v. Beyond that voltages continue to drop in a more straightforward fashion, crossing the 1v mark at around 815MHz.

Though imprecise, this voltage/frequency curve is a fantastic example of why the R9 Nano is so energy efficient. Keeping in mind that power consumption is the square of voltage, AMD is able to significantly reduce their GPU voltage just by dropping from 1000MHz to 900MHz. The R9 Nano is designed to consume not much more than half the power of the R9 Fury X, and yet it delivers 85-90% of the flagship’s performance, and this is why. Though we’re looking at a binned chip and apples-to-apples chip comparisons aren’t fully applicable, it’s safe to say that AMD has to pay a very high power cost to get Fiji to sustain 1000MHz and beyond, creating the power and efficiency niche the R9 Nano enjoys here.

So what are the average clockspeeds for R9 Nano? Let’s take a look.

Officially AMD has been stating that the average gaming clockspeed for the R9 Nano would be around 900MHz. In practice we’re not making it that far; only one game averages better than 900MHz. The average for all of our games is closer to 875MHz, which isn’t too far off from AMD’s average but none the less is below AMD’s projections. Overall this represents a 175MHz gap between the R9 Nano and R9 Fury X, a somewhat larger gap (17%) than the actual performance gap between these two cards.

On a side note, while not plotted here, we’ve also noticed a loose correlation between resolution and frequency. These results were at 2560x1440, however at 3840x2160 the average clockspeed of the R9 Nano was lower still. Some of this we suspect comes down to better utilization of Fiji’s shader engines, however we’re also likely seeing an example of how power hungry ROPs are. 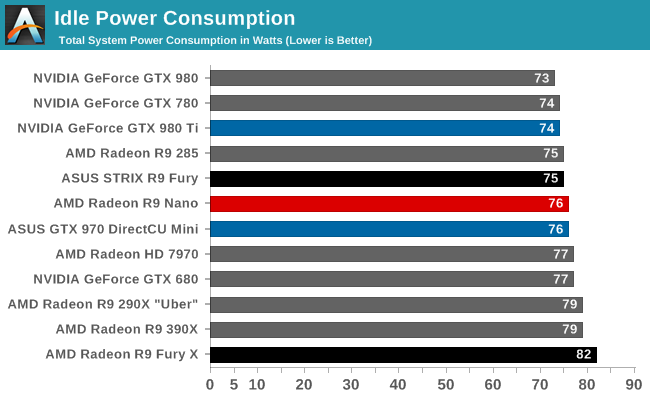 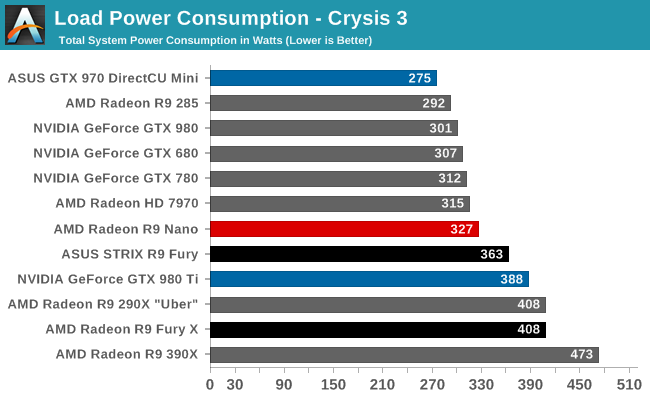 To that end R9 Nano is a very good step up in energy efficiency for AMD. Compared to all other AMD cards, the R9 Nano holds a clear edge in efficiency, including not just other Fiji cards but Tonga cards, Hawaii cards, etc.

The catch for AMD here is that while their energy efficiency has improved over the Fury series, it’s still not fantastic, at least under Crysis 3. The counterpoint to the R9 Nano here is the GTX 980, a card that by and large targets a similar power profile. Furthermore the GTX 980 also gets an almost identical framerate to the R9 Nano here – 65.7fps vs. 65.3fps – which gives us an interesting opportunity to rule out the impact to the CPU of generating more frames. To that end the R9 Nano ends up drawing more power than the GTX 980, 327W vs. 301W.

In-game power measurement isn’t an exact science, and while we can’t rule out the impact of drivers (given what we’ve seen with AMD being CPU limited in two of our games), it’s probably for the best we don’t. Whether it’s the hardware or the drivers, the end result is that the R9 Nano still has worse energy efficiency than the GTX 980 under Crysis 3. 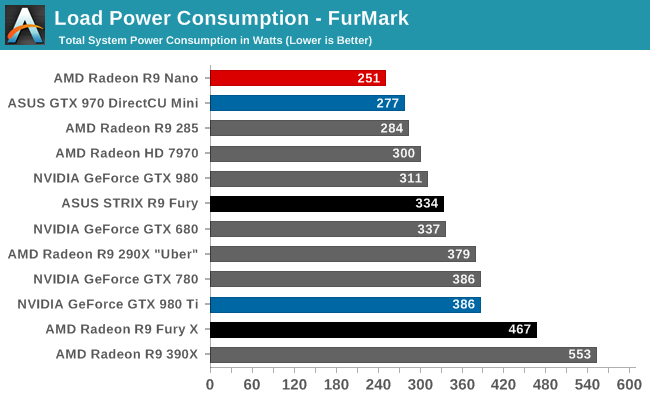 On the other hand FurMark paints a very different picture. Here in a test designed to stress the video card and just the video card, the R9 Nano draws 251W at the wall, the lowest of any of the cards in our review. Such low power consumption relative to our other cards is due to a combination of factors, but the biggest factor here is that the R9 Nano is virtually always power limited, and that means that whether it’s a game or FurMark it’s being power throttled. The Fury cards, by comparison, have power limits much greater than their average gaming power, and this means that their worst case power consumption as demonstrated by FurMark is much higher. This works out to 83W higher for the R9 Fury and 216W(!) higher for R9 Fury X.

On a quick side note, while AMD has never specified the power limit for the R9 Fury X, this data strongly hints that it’s a 375W limit.

More curious perhaps is the fact that the R9 Nano is drawing less power than not only the GTX 980, but the GTX 970 as well. And not just a little bit of power, but 26W in the case of the GTX 970. Even with ASUS throwing in a little more power headroom (as board partners like to do) this is a surprising outcome, and to be honest we’re not 100% sure what to make of it. It would seem that R9 Nano power consumption is much better than the GTX 980/970 in the worst case scenario, but under gaming workloads it fares worse. What we can say at this time is that we can rule out a FurMark-specific throttle condition – R9 Nano temperatures and fanspeeds are virtually identical to Crysis 3 – so it would appear that there is more going on under the hood. 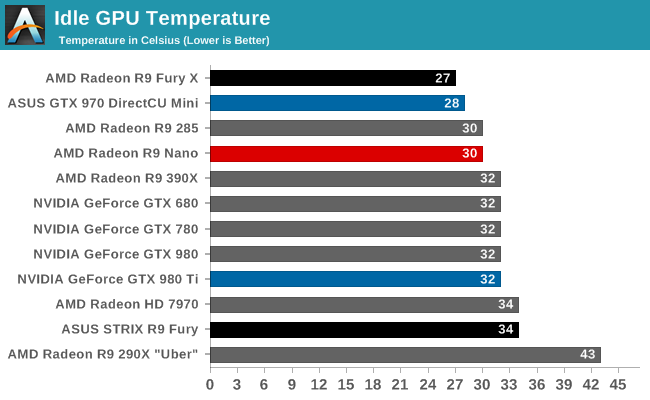 Moving on to temperatures, the R9 Nano behaves almost exactly where we would expect it to with an idle temperature of 30C. This is around what we see for most open air coolers, though the GTX 970 Mini does unexpectedly fare just a bit better. 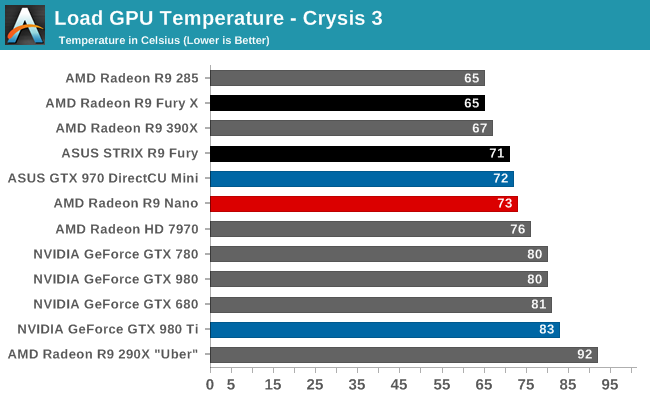 In our R9 Nano briefing AMD told us to expect load temperatures of around 75C for the card, and in our case we do even a hair better at 73C. In building the R9 Nano AMD needed to balance size with power consumption and cooling performance, and so far they’re doing great. To top out at 73C for a 6 inch card generating 175W of heat is a very good result. By comparison it took ASUS a 12 inch card and three fans to keep the R9 Fury at roughly the same temperature, demonstrating both the benefits of lower power operation and AMD’s heatsink plus vapor chamber setup. 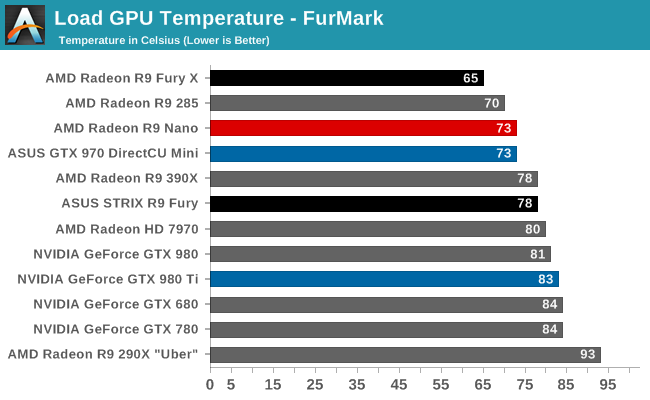 Since the R9 Nano is power limited at all times, we don’t see any significant changes with FurMark. The R9 Nano once again tops out at 73C. 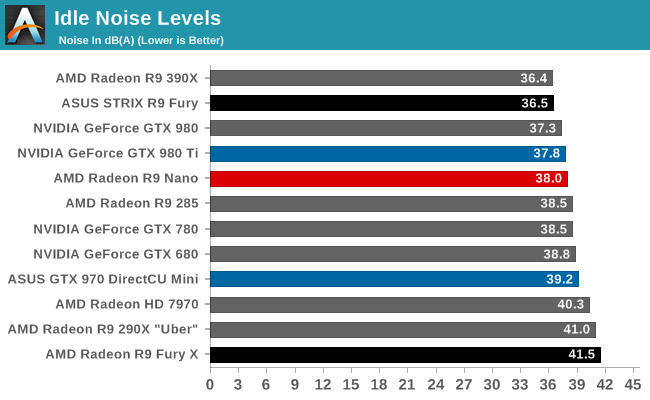 Last but not least we have our noise measurements, starting with idle noise. At idle the R9 Nano is more or less average. For a card that keeps its fan turned on at idle 38dB(A) is roughly what we get across a wide swath of cards.

However given the popularity of zero fan speed idle, I can’t help but feel AMD missed an opportunity here to do even better on idle noise. I suspect AMD had good reasons not to go this route – primarily the relatively small size of the R9 Nano’s heatsink compared to the likes of the ASUS R9 Fury – but it does mean that at the end of the day the R9 Nano can’t be a truly silent card at idle. 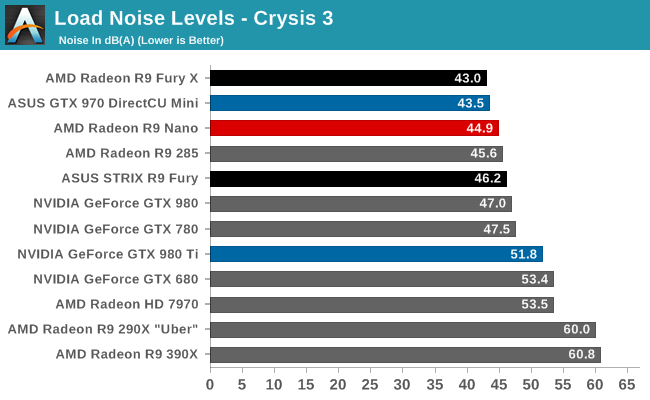 All too often we see cards that make clear and unnecessary tradeoffs between temperatures and noise, so with our look at the final metric for the R9 Nano, noise, it’s great to see that AMD has put together a balanced card. Even though AMD has kept load temperatures at 73C they haven’t compromised on noise levels to get there, and that means that the R9 Nano is nice and quiet under load. Dissipating 175W of heat within a 6 inch card is no easy task, and doing so without generating a ton of noise is even harder, making this a testament to the engineering of the R9 Nano’s cooler.

Overall the R9 Nano is not going to be the quietest Fiji card – in fact it’s in some ways the loudest, coming in louder than the R9 Fury X and Sapphire’s absurd R9 Fury – but AMD has kept noise levels in check overall for such a small card. The only real knock against the R9 Nano is that the GTX 970 Mini ends up being 1.4dB quieter, but at the end of the day it’s also a slower, less power hungry card. 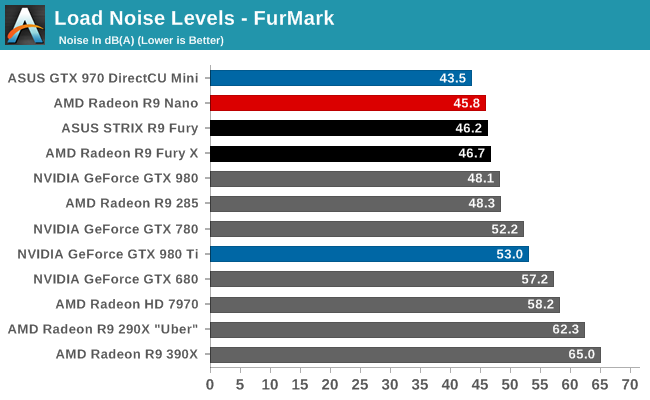 As for FurMark we see the R9 Nano’s lot improve slightly, now slightly edging out both Fury cards. This worst case scenario noise level of 45.8dB(A) makes it the second quietest card here, falling behind only the previously mentioned GTX 970 Mini.

Finally, as we mentioned earlier in this article, along with our standard GPU testbed we also threw a couple of cards into a microATX system in order to test the performance of these cards in a more confined space and to serve as a control.

The overall news is good, with the R9 Nano and its GTX 970 Mini competitor both performing almost unchanged inside a microATX case as far as temperatures and noise go. Both cards see their temperatures tick up by a degree or two, and similarly fan speeds go up a notch as well. But that’s it for changes to cooling performance. Ultimately this isn’t a perfect substitute for a true Mini-ITX case, but at this point we’re reasonably confident that our results would hold up in a good Mini-ITX case just as well as they have in this microATX case.

Wrapping things up with power, temperature, and noise then, we can report that AMD has hit their marks with the R9 Nano. Power consumption is kept contained, keeping the overall power consumption of the card down and significantly improving on AMD’s energy efficiency, even among the other Fiji cards. Meanwhile despite the small size of the card AMD has struck a good balance on cooling performance, more than sufficiently cooling the tiny card while preventing thermal throttling and keeping load noise levels low.

The only real concern we’re seeing here is that while AMD has greatly improved on their energy efficiency with this card, there’s only so much they can do. Energy efficiency compared to NVIDIA’s GM204 lineup (GTX 980/970) is not much better, which for AMD represents a significant improvement, but also means they don’t have any kind of clear advantage over NVIDIA.