A small portion of this page was posted as part of our initial Skylake-K coverage.

The new Skylake-S processors are assigned a new socket, LGA 1151, while the soldered down models use a combination of BGA 1515 (Skylake-Y), BGA 1356 (Skylake-U) and BGA 1440 (Skylake-H). On the desktop, Intel’s policy since 2006 has been to maintain sockets for two generations and as a result moving from Broadwell to Skylake we were expecting the change. This means that Skylake processors will not work in LGA1150 based motherboards, i.e. those with Intel’s 8th and 9th generation chipsets. For Skylake we get the 100-series chipsets with additional functionality. 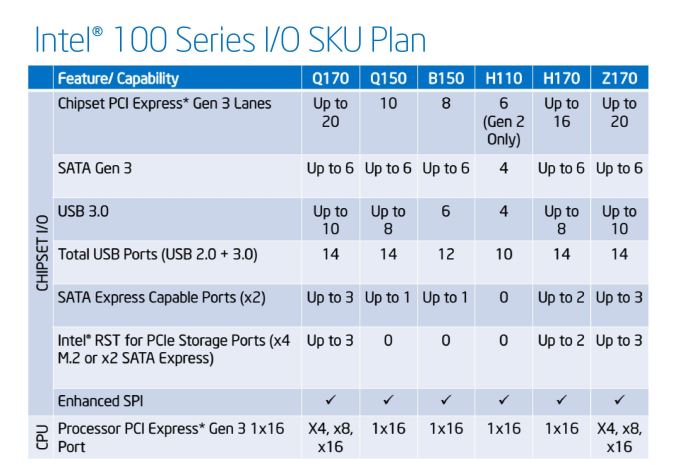 Both Skylake-S and Skylake-H will be subject to the list above, and as mentioned on the previous page while these are being announced today, the more business oriented models (B150/Q1x0) will have a slower roll out over the next few months.

It is worth noting that we had heard rumors that the Z170 chipset was going to be expensive for motherboard manufacturers, resulting in some motherboards that might cost more than X99 counterparts, although those fears were removed when Intel provided final pricing. Nevertheless, it means that there is scope for the cheaper chipsets with fewer features such as H170/H110, especially in high volume markets.

If we set aside the Q170 platform as being Z170 without overclocking but SMB/vPro support, going down in number means fewer features. Perhaps shockingly the H170 chipset is the only other chipset to support Intel RST on PCIe storage, but aside from that the segmentation is as expected with fewer chipset PCIe lanes available on the 150/110 lines.

We’ve touched on the number of chipset lanes on Skylake-S in previous articles, but the 20 PCIe lanes afforded by Z170 is essentially split into five x4 controllers. Each controller can be split into x1, x2 or x4 lanes to total up to four, with a few specific lanes set aside for various features. But the idea here is that the user no longer has to decide between things like M.2 or SATA Express or PCIe slots – with so many on offer, the combinations are somewhat endless. 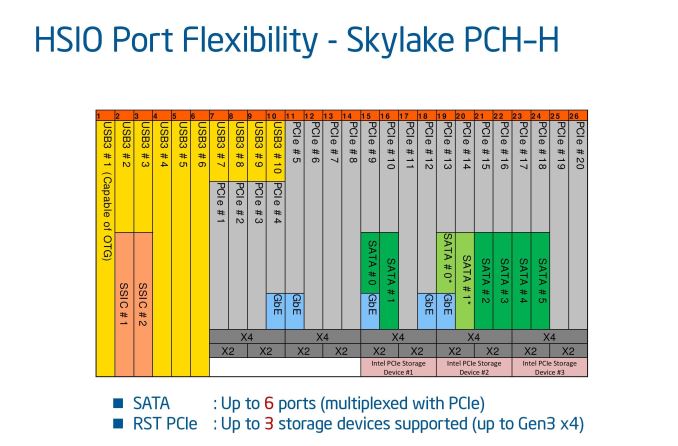 So in the Z170 and Skylake-H arrangements, three of these x4 controllers are specifically for PCIe storage in RST, however using them all would eat up all the chipset SATA ports, requiring some form of SATA controller if that functionality is wanted. There is also some limitations with gigabit Ethernet controllers as well. But apart from that, any feature that requires a PCIe controller can be added as required (USB 3.1, Thunderbolt, WiFi, non-RST PCIe storage, PCIe slots). 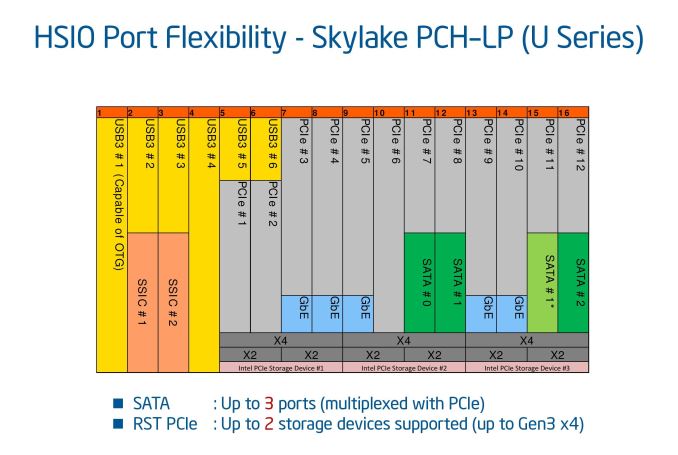 Because Skylake-U and Skylake-Y use on-package low power chipsets, there is a need to be a little more frugal when it comes to functionality in order to save power. As a result we get 12 PCIe lanes for Skylake-U but these can still be split for Intel RST. 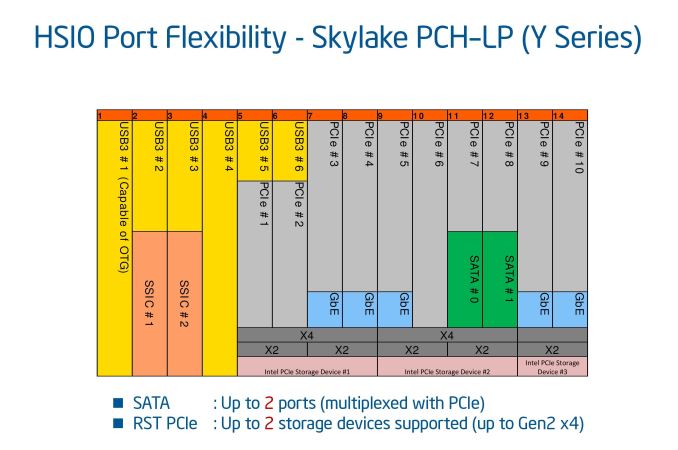 Skylake-Y takes out another pair, and limits the onboard SATA ports to two. Interestingly enough, you could still have five native gigabit Ethernet controllers on there as well. I offer $10 and a drink to the first OEM to come up with a Skylake-Y + 5x GbE design.

We have a large piece on the desktop motherboards being released or talked about for Skylake, covering some 55+ products and the different variations within. The major motherboard manufacturers such as ASUS, GIGABYTE, ASRock, MSI, EVGA and a couple of others should all have a wide range ready to purchase on day one, although some models may be region specific. 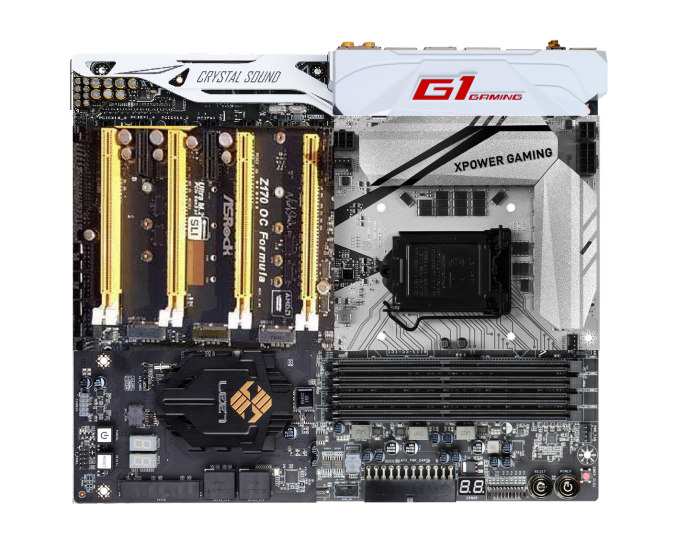 Here’s an amalgamation of some of the designs coming to end users, with almost all of them investing heavily in gaming brands with specific components to aid the user experience while gaming. Aesthetic designs are also going to be a focus of this generation, with some of the manufacturers moving into a different direction with their designs and trying some new color schemes. Some basic looking models will also be available.

Prices for motherboards will range from $60 all the way past $400+, depending on feature set and size. A number of motherboards above $150 will feature a couple USB 3.1 Gen 2 (10Gbps) ports, although you will have to check whether they are Type-A or Type-C. That being said, most motherboards with USB 3.1 will use both, but there are a select few that are C-only or A-only.  We will see a lot of Intel’s new network controller, the I219-V, although the gaming lines might invest in Rivet Network’s Killer solution instead. 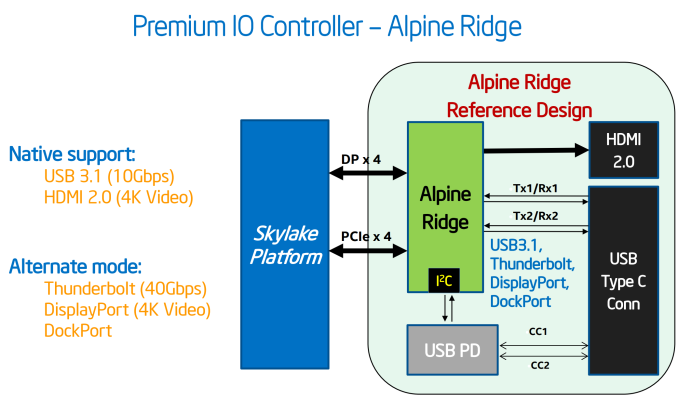 Thunderbolt obviously has more of a play in the laptop space here, and will be available through Intel’s Alpine Ridge controller.  As far as we can tell no devices are set to be announced this week that will have TB support (though we might be surprised), but the controller can also be used for USB 3.1 Gen 2, HDMI 2.0, DisplayPort, and DockPort. According to our sources it would seem that GIGABYTE currently has an exclusive on this technology in the desktop space, and it will be used for their USB 3.1 Gen 2 ports on most motherboard models. The other functionality from the Alpine Ridge controller (TB3, HDMI 2.0) will be on a case-by-case basis depending on how the controller works in two different modes or if extra components are used. We are told that Alpine Ridge costs similarly to the ASMedia ASM1142 controller, but will enable two USB 3.1 Gen 2 ports at 10 Gbps simultaneously as it uses four PCIe lanes from the chipset.

DRAM: The March to DDR4

In the world of DRAM for personal computers, DDR3 is currently king. Having been the main standard since 2007, you would be hard pressed to find a mainstream or low end platform sold that did not require access to DDR3. That changed in the enthusiast segment last year with the launch of Haswell-E which also introduced DDR4 at a high premium. For Haswell-E there was no crossover – you had no choice but to use DDR4 (unless you might be a million-unit customer).

Because the consumers and consumer product OEMs are more price sensitive, DDR4 will be a slower transition in desktops, but the uptake in laptops should be more down to availability. For example, we have seen some DDR4 SO-DIMM engineering samples, but right now we are unsure as to how many of these are available on the B2B circuit as very few (if any) has filtered down to consumer.

Note that there is precedent here in that the move from DDR2 to DDR3 saw a generation of processors that supported both standards and it was up to the motherboard manufacturer to design for it. In this transition, most Skylake processors will support both DDR3L and DDR4 modules, with a few caveats. 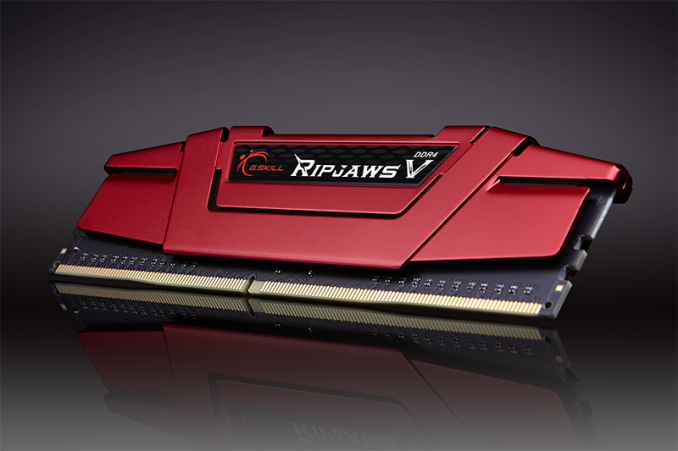 On the desktop side, caveat number one is that initially, only DDR4 motherboards will be on the market. So if you upgrade now, DDR4 needs to be on the shopping list as well. We have had word of some DDR3L-only motherboards coming, especially now that the B/H chipsets are beign released.  Combo boards with DDR3L and DDR4 slots on board are also inbound, but caveat one-point-five - you can use either DDR3L or DDR4 but not both at the same time.

Caveat number two, DDR3L is different to DDR3 as it operates at a lower voltage. This means that the memory controllers on Skylake most likely have a combined voltage domain, and regular DDR3 might not work (in fact early testing suggests not without reducing the voltage). Very few people currently own DDR3L DIMMs, so the likelihood of a user performing an upgrade while reusing their RAM might be slim.

Caveat number three: prices of DDR4 have dropped significantly since last year, and there is only a small premium over DDR3. The benefits of DDR4 include a lower operating voltage, a more stable design, and the ability to purchase 16GB modules with ease. That means that a Skylake-S platform will happily take 64GB of memory. Should 16GB SO-DIMM modules surface, we assume Skylake-H designs should be able to use 64GB also.

With that last point, we should point out that Skylake is a dual memory channel architecture, supporting two memory modules per channel. This gives a maximum of four DDR4 tests, and 4x16 = 64GB maximum. We have been told that Skylake’s DDR4 memory controller, compared to previous generations, is absolutely golden at higher speed memory support. By default Skylake supports the JEDEC standard for DDR4, 2133 MT/s at a latency of 15-15-15, but the overclocking guides we have received suggests that all processors should be able to reach DDR4-3200 relatively comfortably, with a few processors in the right motherboards going for DDR4-4000. While this should bode well for integrated graphics users, those high end kits are typically very expensive.