Unfortunately, accurately and fairly comparing energy consumption at the system level between the S822L and other systems wasn't something we were able to do, as there were quite a few differences in the hardware configuration. For example, the IBM S822L had two SAS controllers and we had no idea how power hungry that chip under the copper heatsink was. Still there is no doubt that the dual CPU system is by far the most important power consumer when the server system is under load. In case of the IBM system, the Centaur chips will take their fair share too, but those chips are not optional. So we can only get a very rough idea how the power consumption compares.

The Haswell core was engineered for mobile use, and there is no denying that Intel's engineers are masters at saving power at low load. 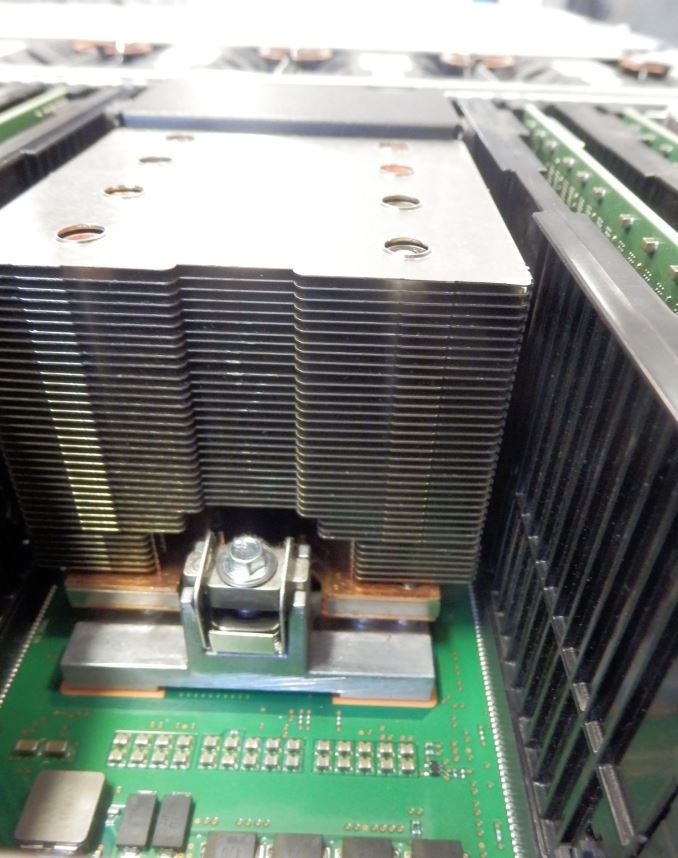 The mightly POWER8 is cooled by a huge heatsink

IBM's POWER8 has pretty advanced power management, as besides p-states, power gating cores and the associated L3-cache should be possible. However, it seems that these features were not enabled out-of-the box for some reason as idle power was quite high. To be fair, we spent much more time on getting our software ported and tuned than on finding the optimal power settings. In the limited time we had with the machine, producing some decent benchmarking numbers was our top priority.

Also, the Centaur chips consume about 16W per chip (Typical, 20W TDP) and as we had 8 of them inside our S822L, those chips could easily be responsible for consuming around 100W.

Interestingly, the IBM POWER8 consumes more energy processing integers than floating point numbers. Which is the exact opposite of the Xeon, which consumes vastly more when crunching AVX/FP code.

Though the cost of buying a system might be only "a drop in the bucket" in the total TCO picture in traditional IT departements running expensive ERP applications, it is an important factor for almost everybody else who buys Xeon systems. It is important to note that the list prices of IBM on their website are too high. It is a bad habit of a typical tier-one OEM.

Thankfully we managed to get some "real street prices", which are between 30% (one server) and 50% (many) lower. To that end we compared the price of the S822L with a discounted DELL R730 system. The list below is not complete, as we only show the cost of the most important components. The idea is to focus on the total system price and show which components contribute the most to the total system cost.

With more or less comparable specs, the S822L was about 50% more expensive. However, it was almost impossible to make an apples-to-apples comparison. The biggest "price issue" are the CDIMMs, which are almost 4 times as expensive as "normal" RDIMMs. CDIMMs offer more as they include an L4-cache and some extra features (such as a redundant memory chip for each 9 chips). For most typical current Xeon E5 customers, the cost issue will be important. For a few, the extra redundancy and higher bandwidth will be interesting. Less important, but still significant is the fact that IBM uses SAS disks, which increase the cost of the storage system, especially if you want lots of them.

This cost issue will be much less important on most third party POWER8 systems. Tyan's "Habanero" system for example integrates the Centaur chips on the motherboard, making the motherboard more expensive but you can use standard registered DDR3L RDIMMs, which are much cheaper. Meanwhile the POWER8 processor tends to be very reasonably priced, at around $1500. That is what Dell would charge for an Intel Xeon E5-2670 (12 cores at 2.3-2.6 GHz, 120W). So while Intel's Xeon are much more power efficient than the POWER8 chips, the latter tends to be quite a bit cheaper.