Before launch, the following image was doing the rounds on social media and other technology websites: 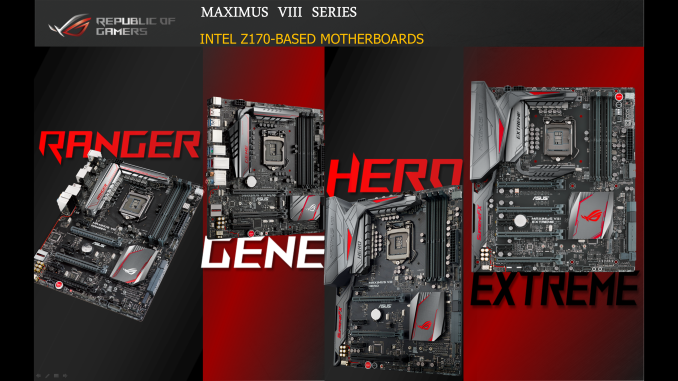 As far as we know, this image shows the four main motherboard models for ROG this chipset for launch. Normally the ROG line also incorporates the Formula and the Impact, however if they are coming then we might see them later this year, but at this point the Ranger and Hero are designed to fill in the lower cost brackets, the Gene in the smaller form factor segment and the Extreme for the high end. 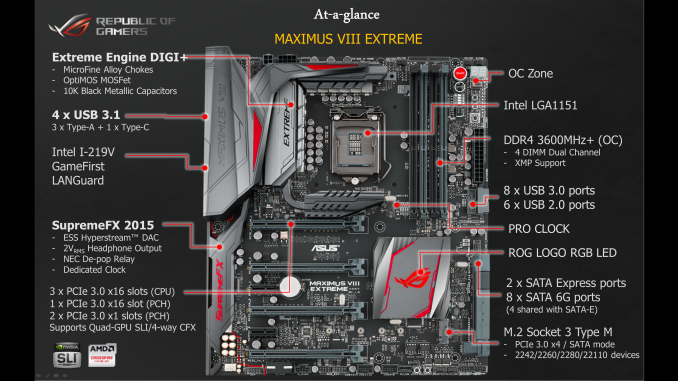 The Maximus VIII (eight) Extreme is designed to be sat at the top of the ROG stack, incorporating a lot of the high end features we might expect on a Z170 motherboard and following in the theme of catering for both gamers and extreme overclockers alike. For now, this is the only proper image we have of the board – it would seem that ASUS is not ready to release it at this time, but it is coming and these are the features we should expect on it.

The extended heatsink around the power delivery is there to do its regular job of moving heat away, but I can confirm here that this is not hiding a PLX chip for the PCIe lanes. The power delivery is designed to be enhanced to take care of whatever extreme overclockers throw at it, and in previous generations most sub-zero overclockers float towards boards like the Extreme as a result. On the high level features, the PCIe slots are arranged to give x16, x8/x8 or x8/x4/x4 from the processor and another PCIe 3.0 x4 from the chipset which will afford two card SLI and four card CFX modes. Extra power for the PCIe slots is provided by the molex at the bottom of the board.

For overclocking there is an OC zone in the top right, featuring what looks like voltage points, an LN2 switch, PCIe disable switches, voltage read points and a myriad of buttons for various options. There is also a Pro Clock IC in the middle of the board which, as far as I understand, allows a finer granularity when it comes to CPU frequency adjustments. The Chipset heatsink has an embedded RGB LED in the name of style, and sits above a PCIe 3.0 x4 M.2 slot.

Aside from the M.2 slot, storage comes from eight SATA 6 Gbps ports, four ports of which take part in the two SATA Express ports, and we get the U.2 connector as we saw on the WS model on the previous page. On the left hand side of the board, the gaming section of the audience get an upgraded SupremeFX audio solution with an integrated DAC, de-pop relay, suitable headphone output ranges and all the usual stuff that goes into an enhanced ALC1150 design. Networking comes via the Intel I219-V controller, and four USB 3.1 ports are present in the form of three 3.1-A and a single 3.1-C.

Pricing and exact release of the Extreme is still to be announced. 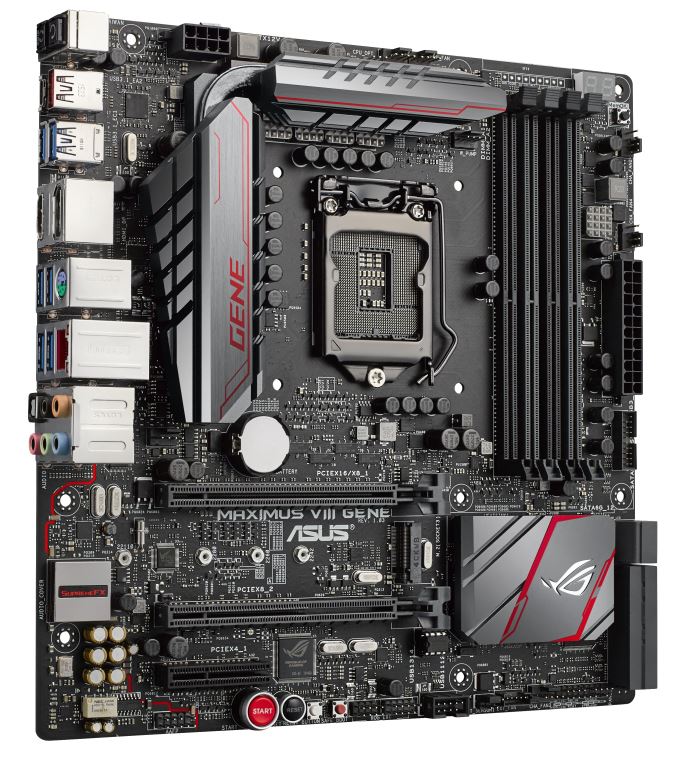 The Gene is ASUS’s micro-ATX gaming option, and I’m glad we get one here given that X99 went without. When the board goes smaller, it gets slightly more difficult to fit everything on, and compared to the Extreme it is safe to say that the other motherboards in the line focus a little more on gaming but come with as many overclocking utilities as possible as well. Hardware-wise we have support for x16 or x8/x8 graphics combinations, the SupremeFX audio solution and the Intel I219-V network controller. USB 3.1 comes via the usual A+C combination, which I’m sure at this point after writing about 20-odd motherboards is going to become the standard on any board that has USB 3.1.

The chipset heatsink has an embedded red LED in it, and sits next to the six SATA 6 Gbps ports which also house two SATA Express ports. We also get the M.2 slot in the middle of the board, supporting PCIe 3.0 x4. 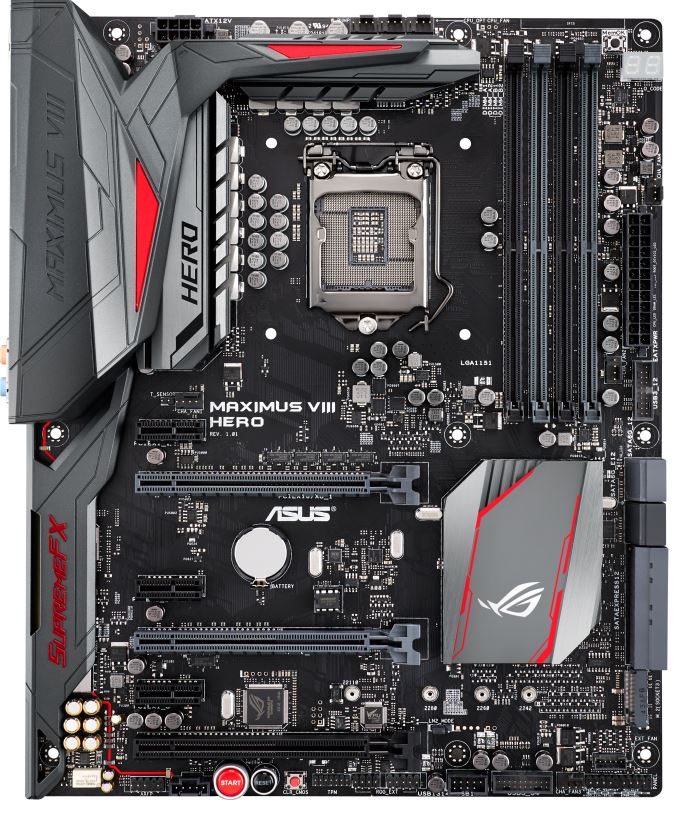 The Hero sits above the Ranger and arguably acts as the ‘Gene in ATX’ form below what is commonly the Formula model. This means a similar set of characteristics to the Gene, such as the PCIe arrangement, USB 3.1, networking and video outputs. The Hero goes above the Gene in the sense that we get an RGB LED in the chipset heatsink, two extra SATA ports to play with and the extended shield across the audio and rear panel in order to enhance the aesthetic. 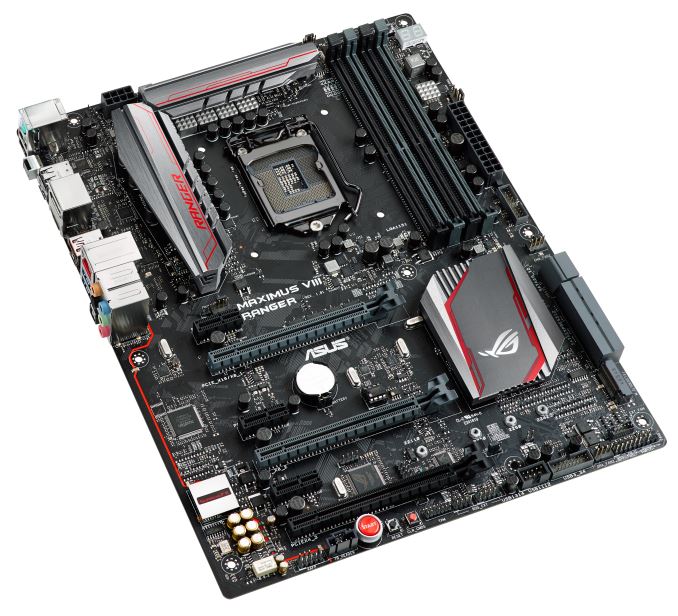 The Ranger fills in at the bottom of the ROG stack, but still comes with a number of important features. If anything, it seems to mirror the Hero without the large rear panel shield, use a different style of power delivery chokes and comes without an RGB LED in the chipset. Avid onlookers will notice the adjustment of the reset button to a simpler design and two fewer SATA ports as well.