The new 6th Generation Skylake platform from Intel has launched today, and as part of the package there are two new processors, the Core i7-6700K and the Core i5-6600K, a new Z170 motherboard chipset with corresponding motherboards, and also a new market for DDR4 DRAM. The purpose of the Skylake platform launch is to update the mainstream PC market segment for the purposes of better performance and enhanced connectivity. 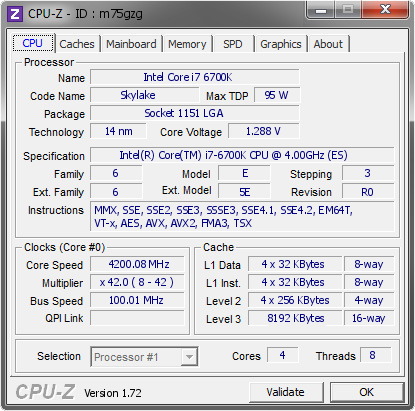 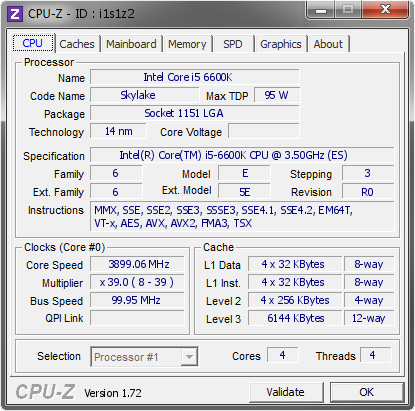 Skylake is a new processor architecture based on Intel’s 14nm process using the newest generation of their FinFET lithographic technology, and the two overclockable K series CPUs are the first processors to be released into the wild. For some this is mildly confusing, given that Intel launched Broadwell for desktop (a die shrink "tick" from 22nm to 14nm) only a couple of months ago. Broadwell has only acted as a minor stopgap measure, fulfilling the requirements of an upgradable platform and taking the crown of the best integrated graphics processor for a socket. As a result of that minor role, a number of users will see Skylake more as an upgrade from Haswell, the last mainstream processor family that had a long market shelf life.

For this launch and review, details about Skylake have been relatively rare to come by even in Intel’s own press documents, and we are set to hear more details at Intel’s Developer Forum in mid-August. Nonetheless, we have been able to determine that Skylake has a raft of updates, focusing on fixed function hardware to accelerate certain workloads as well as decoupling the CPU and PCIe frequency domains on the silicon to allow for more precise overclocking.

The platform changes as well. The voltage regulators inside Haswell CPUs move back out on to the motherboard as they generated too much heat inside the CPU. This is good for overclockers, but means the required components on Z170 motherboards, and price, has the potential to go up. The Z170 chipset is the sole chipset being released today, with others coming later in the year. Z170 features an upgrade to DMI 3.0, giving faster CPU-to-chipset bandwidth and enabling a 26-lane high speed IO hub. Of these lanes, 20 can be configured for PCIe lanes under a strict set of rules, giving access to the potential for more functionality on board. Most motherboards being launched today will use these lanes to provide M.2 slots, USB 3.1 Gen 2 ports via controllers, extra networking, extra PCIe slots and SATA Express connectivity. In our motherboard overview we have details on over 55 motherboards to look through.

Overall, Skylake is not an earth shattering leap in performance. In our IPC testing, with CPUs at 3 GHz, we saw a 5.7% increase in performance over a Haswell processor at the same clockspeed and ~ 25% gains over Sandy Bridge. That 5.7% value masks the fact that between Haswell and Skylake, we have Broadwell, marking a 5.7% increase for a two generation gap. 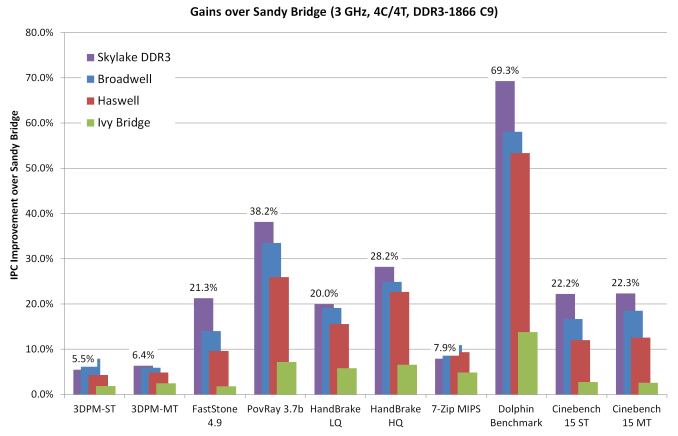 In our discrete gaming benchmarks, at 3GHz Skylake actually performs worse than Haswell at an equivalent clockspeed, giving up an average of 1.3% performance. We don’t have much from Intel as to analyze the architecture to see why this happens, and it is pretty arguable that it is noticeable, but it is there. Hopefully this is just a teething issue with the new platform.

When we ratchet the CPUs back up to their regular, stock clockspeeds, we see a gap worth discussing. Overall at stock, the i7-6700K is an average 37% faster than Sandy Bridge in CPU benchmarks, 19% faster than the i7-4770K, and 5% faster than the Devil’s Canyon based i7-4790K. Certain benchmarks like HandBrake, Hybrid x265, and Google Octane get substantially bigger gains, suggesting that Skylake’s strengths may lie in fixed function hardware under the hood.

In full speed gaming benchmarks we have some situations that benefit from Skylake (GRID on high end graphics cards) and others that drop (Mordor on GTX 770), but the important aspect to consider is despite Skylake supporting both DDR3L and DDR4 memory, our results show that even with a fast DDR3 kit, a default-speed DDR4 set of memory is still worth upgrading to. On average there’s a small change in performance in favor of the DDR4 (especially in integrated graphics), but DDR4 confers benefits such as more memory per module and lower voltages to aid power consumption 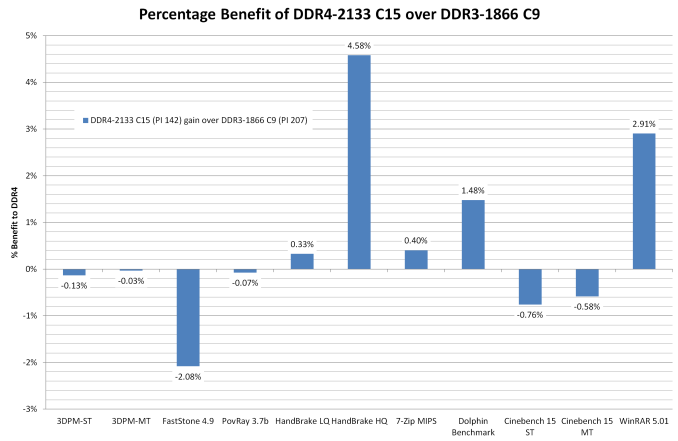 A quick turn to the overclocking situation on Skylake: from our small sample set, most of the CPUs achieved 4.6 GHz when pushing and 4.5 GHz comfortably, including the retail sample that had 4.5 GHz. Speaking to other reviewers, their results match us or even slightly better our own, with one report of a 5.0 GHz gem of a processor. From our testing, Skylake seems to have more of a temperature barrier than a voltage barrier, so increasing the cooling seems to be the task of the day here to get the high frequencies.

With all that, I’m going to make a bold statement.

Sandy Bridge, Your Time Is Up.

A large number of users invested into Intel based platforms during the Core 2 Quad, Nehalem and Sandy Bridge releases. Sandy Bridge was notable because it inferred a large performance gain at stock speeds, and with a good processor anyone could reach 4.7 GHz and even higher using a good high end cooler. With that, Intel has had a problem enticing these users to upgrade because their performance has been constantly matched by Ivy Bridge, Haswell and Broadwell – for every 5% IPC increase from the CPU, an average 200 MHz was lost on the good overclock and they would have to find a good overclocking CPU again. There was no great reason, apart from chipset functionality to upgrade.

That changes with Skylake.

From a clock-to-clock performance perspective, Skylake gives an average ~25% better performance in CPU based benchmarks, and when running both generations of processors at their stock speeds that increase jumps up to 37%. In specific tests, it is even higher.  When you scale up to a 4.5 GHz Skylake against a 4.7 GHz Sandy Bridge, the 4% frequency difference is only a tiny portion of that. There are other added benefits, such as the move to a DDR4 memory topology that has denser memory modules, as well as PCIe storage and even PCIe 3.0 graphics connectivity.

As I said above, Skylake is not necessarily the most ground breaking architecture over Haswell. It affords a 19% CPU performance gain over the i7-4770K and 5% over the i7-4790K. There is a small minor issue with gaming that disappears when you use synthetics, but only to the tune of a couple of percentage points. For that minor hit, the package combo of processor, chipset and DDR4 should be an intrigue in the minds of Sandy Bridge (and older) owners.

Next on the list for us is Intel’s Developer Forum in mid-August. Here Intel has said they will present details on their Skylake architecture and it will hopefully shed some further insight into what is going on under the hood with Skylake. We will have a full write up for you after the event.

There is still the rest of the Skylake stack to be released – non overclocking processors, low power processors, and the B/H/Q chipsets too. There is no official date on these except ‘later in the year’. We will also get to these when we have more information.