Another vector in the PC space that has been gaining attention and growth recently is the concept of small form factor devices, either to be used as office machines, portals to the web or as gaming devices. With the rise of tablets and Chromebooks eating into the low end portable market, Intel introduced the NUC (to which Gigabyte and Zotac have their own variants) to provide a small device that could also be mounted on the back of a monitor but still had full performance of a Core based PC. A step up from that and we have mini-ITX PCs, but for some this is still too big, especially when we throw potential Steamboxes into the mix. That is when we get devices like the ASUS GR8 and GR6 that fit into a bookshelf, or the MSI Nightblade designed to be a shoebox PC. For Computex, MSI is introducing the Nightblade Mi.

Not to be confused with anything from Xiaomi, or Nintendo based avatars, the Nightblade Mi is the bookshelf-sized sibling of the Nightblade. 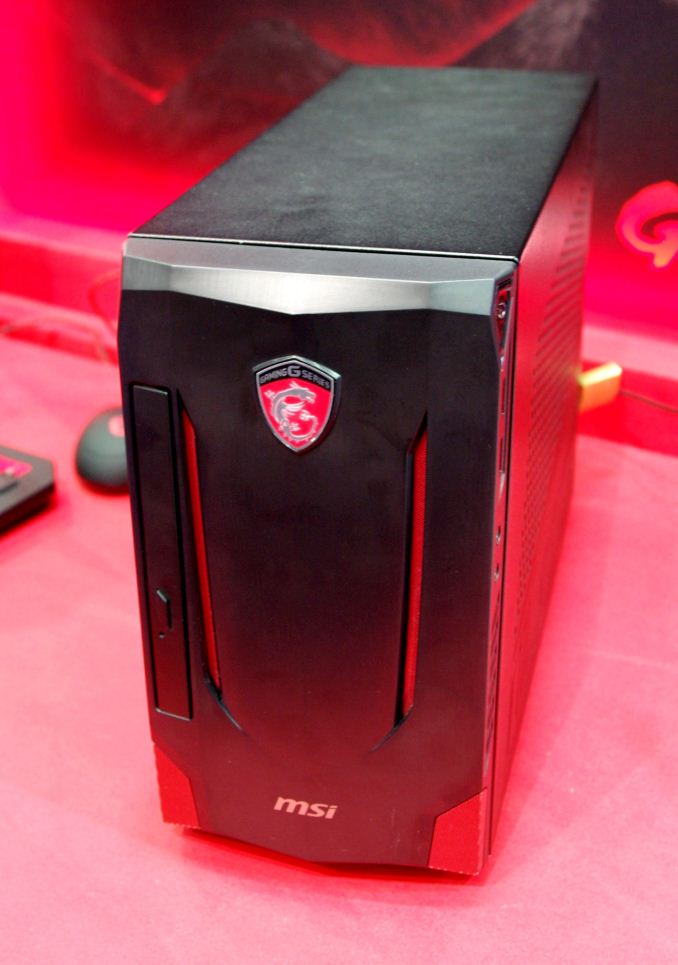 The Mi is barely taller than a standard half-liter water bottle and is similarly designed like the Nightblade to house a full motherboard, CPU and discrete graphics card. Behind the scenes, we got a closer look at the internals. 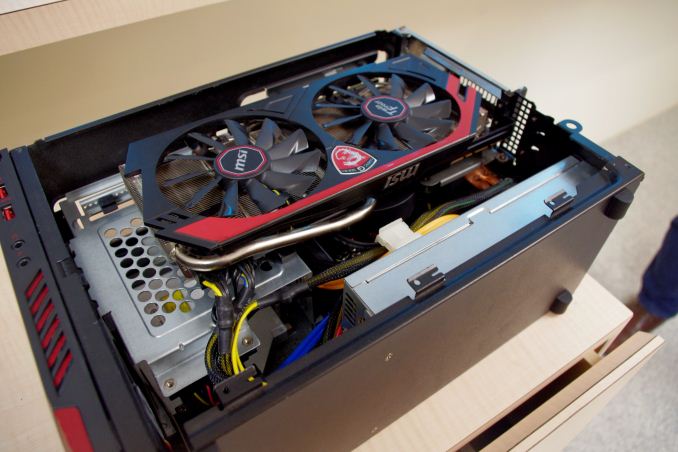 The system uses smaller components where possible, and MSI stated that they’re not too concerned with the color scheme internally at this point as the Mi is designed to be slightly hidden away and blend into home décor. 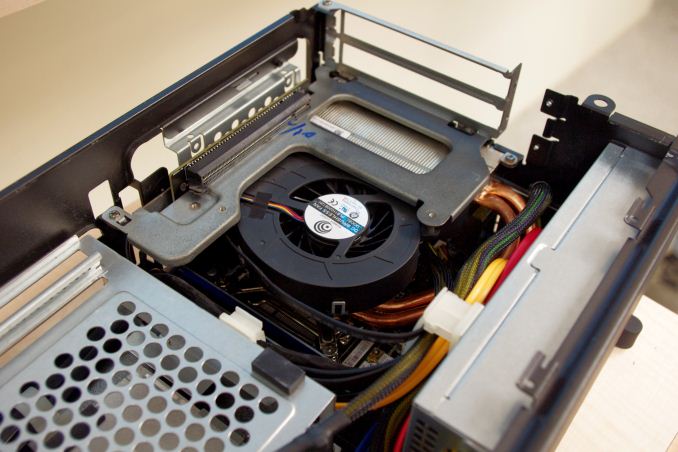 A full mini-ITX motherboard is used with a laptop-oriented style blower fan with heatpipes. The fan should be able to handle 88W-95W of CPU power, although MSI recommends against overclocking in such a small form factor. The blower sits below the GPU, so airflow through these areas is important. From the top of this image we can see the ability for a dual slot GPU to be inserted. 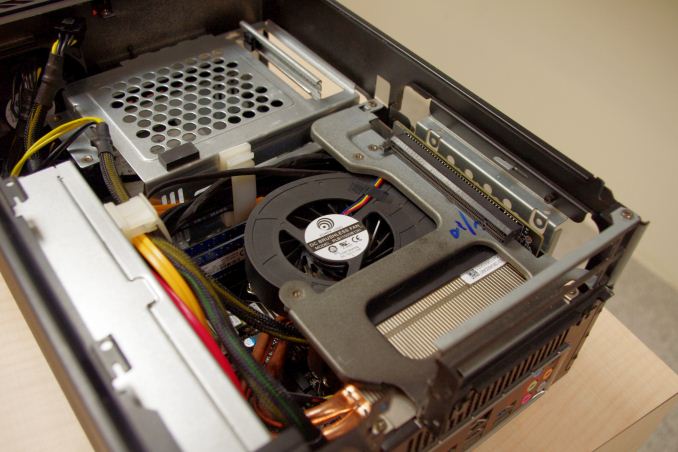 The GPU arrangement is provided by a PCIe 3.0 x16 riser card with the dimensions allowing even a Titan X into the mix. The power supply is the crucial element here, and if I remember correctly then this is a 450W 80PLUS Silver design derived from the server market. 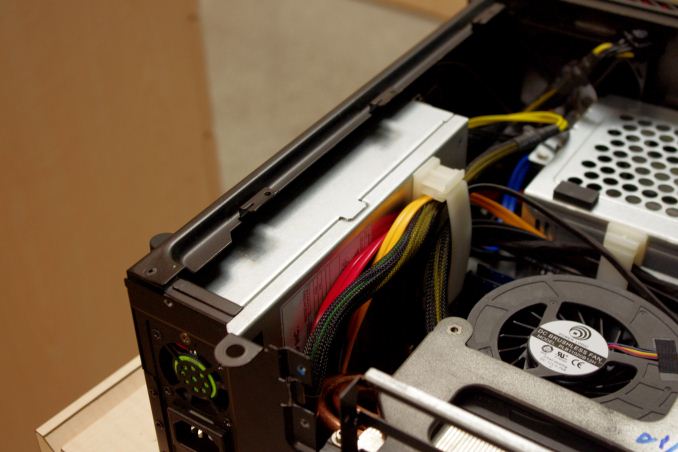 MSI has designed the system to take a single 2.5-inch SSD on the top: 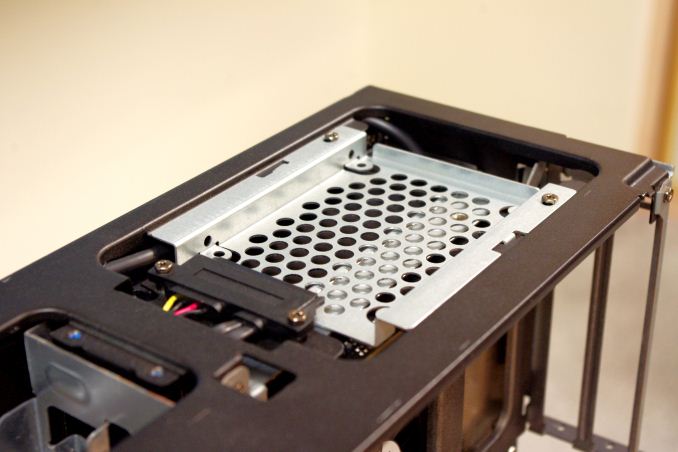 There is space for two 3.5-inch drives (or two 2.5-inch) to be slotted into a mini-backplane, also accessible from the top. 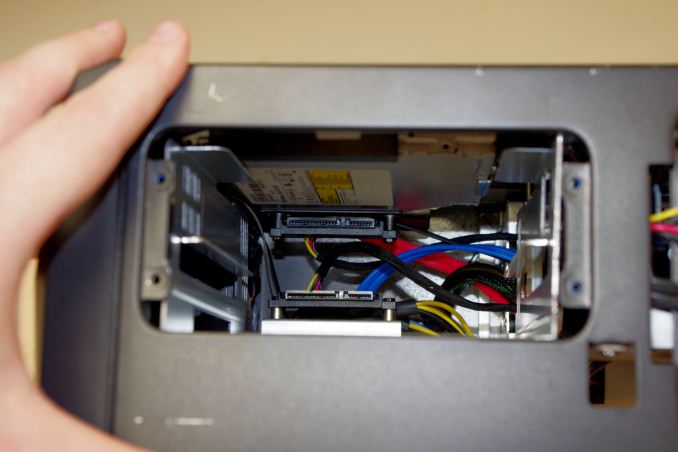 As far as I understand, MSI will be offering the system as a barebones for end-users or as an OEM to system integrators who can add in their own components, do custom design choices and then sell on as a unique part in their lineup. Personally I told MSI that the aim here should be for a $600 total build, perhaps with an i3 and a GTX 960/R9 285, because ultimately this price range and market segment attracts the under-25s more than anything else. Under-25s typically play eSports based titles, which do not require super machines to play, but also their budgets are smaller by virtue of schooling or entry level jobs, meaning that $600 for a system build is not unreasonable, but they certainly are not paying $1500+ (except for the odd one or two). MSI is going to be launching the Mi with a focus on Skylake, so we’ll wait and see how it permeates through the distribution channels then.

At the top of the page we mentioned the Intel NUC and the counterparts that play in the mini-PC space, such as the GIGABYTE BRIX, ECS LIVA and the Zotac array of mini-PCs. Cubi is MSI’s attempt to enter this space, using a custom 4-inch x 4-inch design. 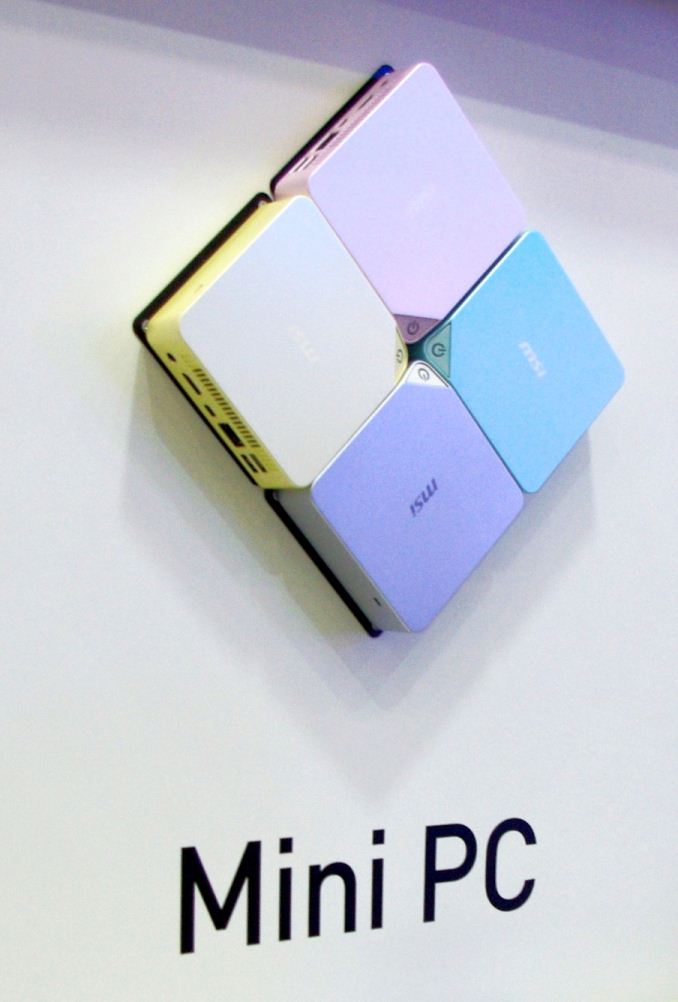 MSI told me that their focus with these devices, based on Atom initially, is to enter the PC-on-monitor implementations similar to the NUC. When entering this market, the application in marketing to the verticals is important, such as education, government, health and others such as business, and with each segment comes a list of requirements. Most prominent on that list is typically vPro, allowing remote admin access to system configurations and site-wide deployment of updates. This is the market MSI is aiming for.

The configuration of the Cubi models on show focus on HDMI, Ethernet, DisplayPort and USB 3.0 with integrated wireless and support for two SO-DIMMs and a 2.5-inch drive. MSI was asking about whether 4 inches by 4 inches was optimal, or if a 5x5 arrangement also fit into this space. Note that VESA mounting is 75x75mm or 100x100mm, so having a 5-inch by 5-inch design wouldn’t hurt the segments that MSI is aiming for unless the monitors used placed the stand in the VESA mount, and the larger size would interfere with the stand.

Initial Cubi designs should be based around Atom, though I suspect we will see Core based versions, either at this thickness or slightly more, in the future. Whether that’s Core M or Pentium/Celeron has not been specified.