The Four Faces of Fiji, & Quantum Too

All told, AMD has announced that they will be launching 4 different video cards based on the Fiji GPU in the coming months. Today’s launch is for their single-GPU flagship, the R9 Fury X, but that card will soon be joined by single-GPU and multi-GPU siblings.

The second Fiji card to be launched will be the R9 Fury (vanilla) later this month. AMD has not announced the specifications for this card – presumably to avoid taking any attention away from the R9 Fury X and from any risk of Osborning it in the process – but we do know a few things about the card. Unlike the R9 Fury X, the R9 Fury will be an air cooled card, with AMD’s partners putting together their own designs for the card. It will be based on a cut down version of the Fiji GPU – so you won’t be seeing any air cooled full-performance Fiji cards – though it, like all Fiji cards, will come with all 4GB of VRAM. Finally, it will be launching at $549.

For AMD’s third Fiji card, they are going small form factor, and this is the card that will be called the R9 Nano (the lack of Fury in the name is intentional). Taking advantage of the highly integrated nature of the Fiji GPU and the resulting small boards that can be built with it, AMD will be producing a card similar in size to the R9 Fury X, except with air cooling rather than liquid cooling. The R9 Nano turned a lot of heads when it was first introduced and for good reason; while cards optimized for small form factors are not a new thing, they tend to top out at mid-to-high end GPUs, such as Tonga and GM204. The R9 Nano would be substantially more powerful by comparison, but no larger. 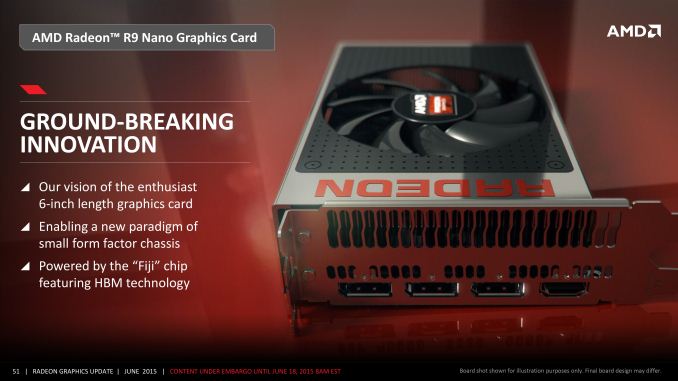 Unlike the R9 Fury, AMD has announced the bulk of the specs for the R9 Nano. This card will feature a fully enabled Fiji GPU, and given AMD’s goals I suspect this is where we’re going to see the lowest leakage bins end up. What separates R9 Nano from R9 Fury X is the power target, and as a result the expected sustained clockspeeds and performance. The R9 Nano will be a 175W card, 100W less than the R9 Fury X, and even with heavy binning it’s a safe bet that it will not be able to hit/sustain R9 Fury X’s 1050MHz clockspeed. However with that said, because clockspeeds, voltages, and power consumption have a non-linear effect, at this point in time it is reasonable to assume that AMD is going to be able to hit and sustain relatively high clockspeeds even at 175W just by backing off on load voltage. AMD is not giving us any expectations for clockspeeds at this time, though on a personal note based on the kind of clockspeed scaling we see on other 28nm GPUs, I would be surprised if a 175W Fiji could not sustain 800MHz or better in games at 175W, assuming the cooler is capable of dissipating that much heat. 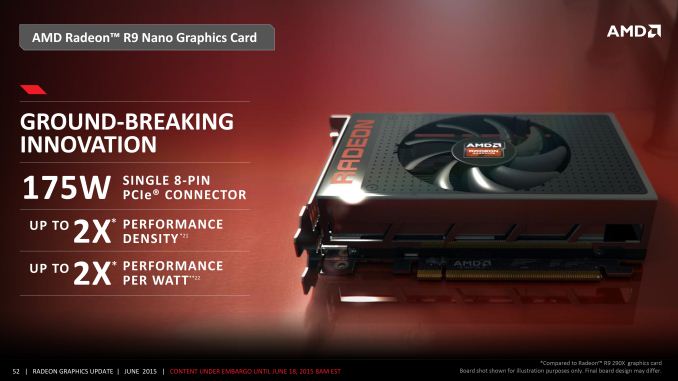 Meanwhile, since R9 Nano’s lower clockspeeds put it closer to the clockspeed/voltage sweet spot than R9 Fury X does, overall power efficiency should be even better than Fury X. AMD is touting that R9 Nano should offer twice the performance per watt of R9 290X, and while R9 290X is not exactly a high point for AMD, this would still be a substaintial improvement for AMD. With the R9 Nano launching at some point this summer, the big unknown here, if anything, will be price. If R9 Nano does end up taking AMD’s best Fiji chips, and given the lack of competition in the small form factor space, it may end up being more expensive than R9 Fury X due to rarity and the performance advantage we’re expecting such a card to have.

Last but not least in the Fiji lineup will be the company’s unnamed dual GPU card. Quickly teased by AMD CEO Dr. Lisa Su at the PC Gaming Show, the dual-GPU card is already up and running for AMD with an expected launch date of the fall. AMD has not announced specifications or pricing for the card, but they have shown off the naked board, confirming the presence of two Fiji GPUs, along with a pair of 8-pin PCIe power sockets. Meanwhile with 4GB of VRAM for each GPU on-package via HBM technology, AMD has been able to design a dual-GPU card that’s shorter and simpler than their previous dual-GPU cards like the R9 295X2 and HD 7990, saving space that would have otherwise been occupied by GDDR5 memory modules and the associated VRMs. 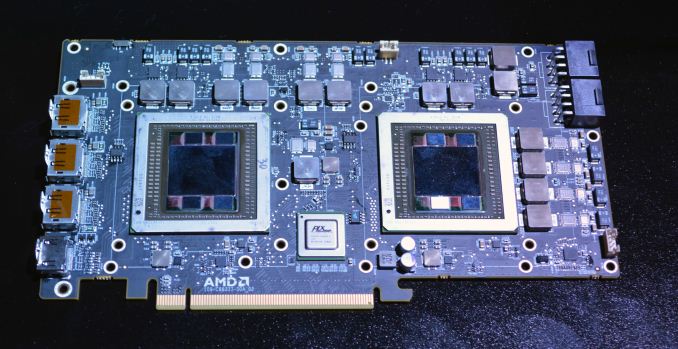 Based on the Project Quantum sample computers AMD was showing off (more on that in a second), we’re expecting that these will be liquid cooled cards, just like the R9 Fury X. The R9 295X2’s liquid cooler was one of AMD’s big success stories of 2014, delivering excellent cooling and acoustics for what is traditionally a problematic video card design, so it would come as no surprise to see it reused here. The dual GPU card being another 500W card like the R9 295X2 is also a safe bet, but we’ll have to see just what AMD announces in the fall.

Finally, AMD’s last Fiji-related project to come out of the R9 Fury X launch is not another Fiji card, but rather a new PC form factor built around the dual GPU Fiji card. AMD calls this form factor Project Quantum, and it is designed to exploit the size advantage of the Fiji GPU and the non-traditional cooling setups enabled by closed loop liquid coolers. 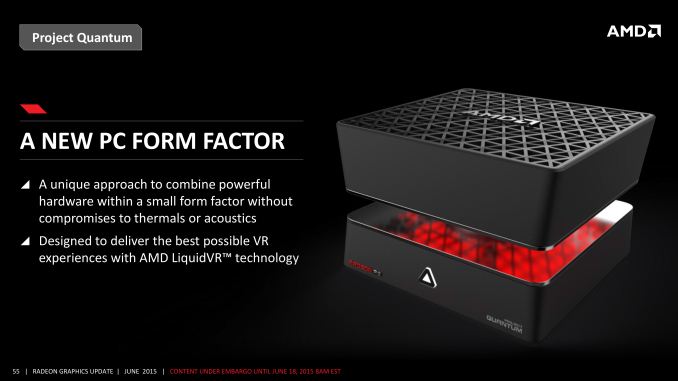 Vaguely resembling a squared-off 1978 Cylon Basestar with its distinct top and bottom halves attached via a narrow tube in the middle, in a Project Quantum computer the lower half of the machine contains all of the electronics while the upper half of the machine contains all of the radiators for the closed loop liquid coolers. Both the Intel CPU and Fiji GPUs are liquid cooled here, so the vast majority of the heat is removed from the lower chamber and directly exhausted out of the top of the machine.

AMD is pitching Project Quantum as an example of the kind of form factors that HBM-equipped GPUs and liquid cooling together can enable, allowing thermal densities greater than traditional, air cooled SFF PCs. The split design in turn is meant to accentuate the fact that all of the electronics at in the bottom chamber, but at the same time there is also a degree of practicality involved since without the split there would be nowhere for the fans to draw air for the top chamber. Finally, since it features a dual GPU card, AMD is also pitching it as a potential VR host design, since VR has high GPU requirements and is expected to scale very well from 1 to 2 GPUs (right eye/left eye). 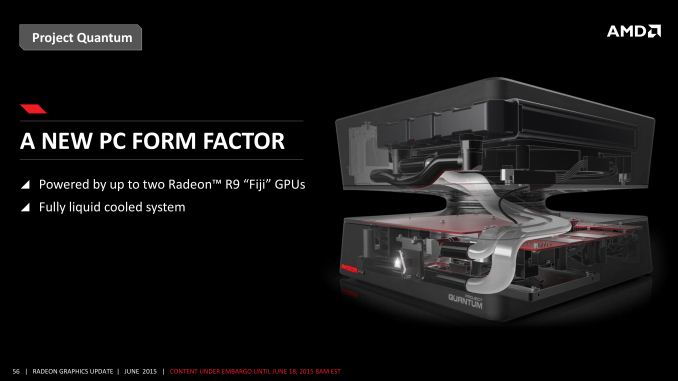 As for the availability of Project Quantum machines, that much remains to be seen. AMD has made it clear that they don’t intend to sell these machines themselves, and that Project Quantum is a concept, not a product. However if AMD can find a partner to work with to mass produce machines, a retail product similar to Project Quantum is not off the table at this time. Though I suspect even in the best case scenario we’d be looking at 2016 for such retail machines.