The final game in our review of the R9 Fury X is our most recent addition, Grand Theft Auto V. The latest edition of Rockstar’s venerable series of open world action games, Grand Theft Auto V was originally released to the last-gen consoles back in 2013. However thanks to a rather significant facelift for the current-gen consoles and PCs, along with the ability to greatly turn up rendering distances and add other features like MSAA and more realistic shadows, the end result is a game that is still among the most stressful of our benchmarks when all of its features are turned up. Furthermore, in a move rather uncharacteristic of most open world action games, Grand Theft Auto also includes a very comprehensive benchmark mode, giving us a great chance to look into the performance of an open world action game. 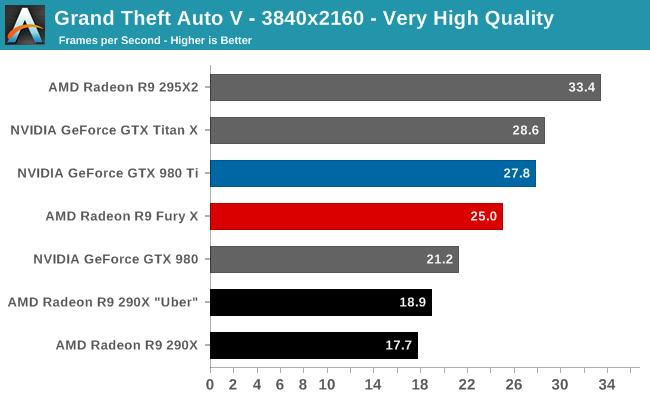 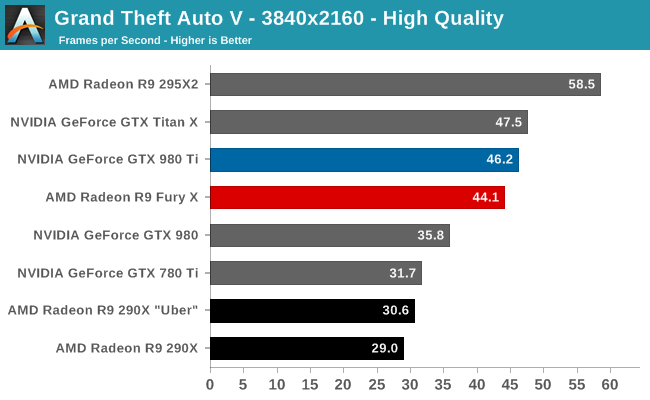 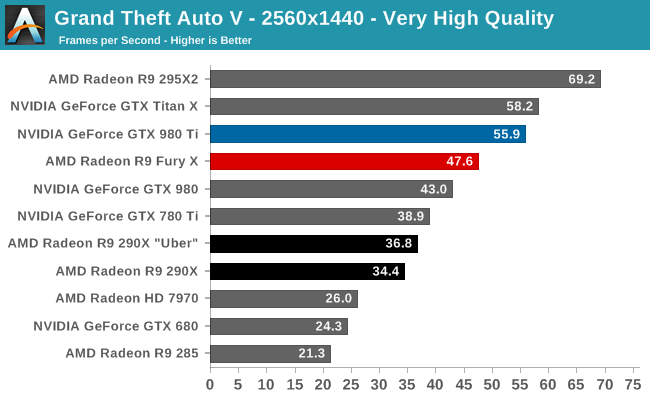 Our final game sees the R9 Fury X go out on either an average or slightly worse than average note, depending on the settings and resolution we are looking at. At our highest 4K settings the R9 Fury X trails the GTX 980 Ti once again, this time by 10%. Worse, at 1440p it’s now 15%. On the other hand if we run at our lower, more playable 4K settings, then the gap is only 5%, roughly in line with the overall average 4K performance gap between the GTX 980 Ti and R9 Fury X.

In this case it’s probably to AMD’s benefit that our highest 4K settings aren’t actually playable on a single GPU card, as the necessary drop in quality gets them closer to NVIDIA’s performance. On the other hand this does reiterate the fact that right now many games will force a tradeoff between resolution and quality if you wish to pursue 4K gaming.

Finally, the performance gains relative to the R9 290X are pretty good. 29% at 1440p, and 44% at the lower quality playable 4K resolution setting. 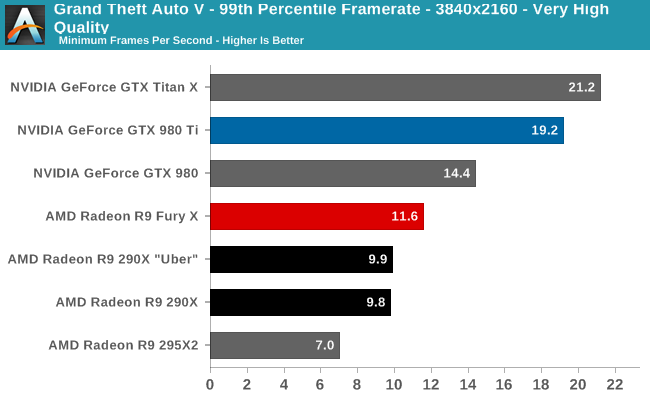 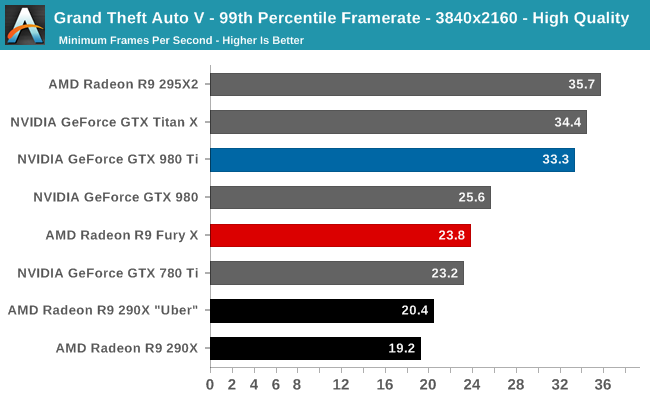 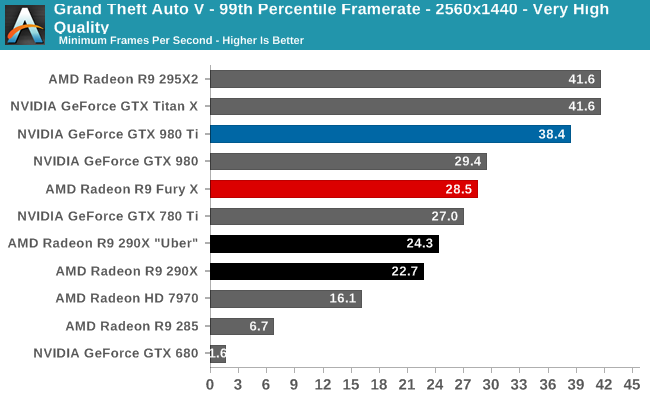 Shifting gears to 99th percentile frametimes however – a much-welcome feature of the game’s built-in benchmark – finds that AMD doesn’t fare nearly as well. At the 99th percentile the R9 Fury X trails the GTX 980 Ti at all times, and significantly so. The deficit is anywhere between 26% at 1440p to 40% at 4K Very High.

What’s happening here is a combination of multiple factors. First and foremost, next to Shadow of Mordor, GTAV is our other VRAM busting game. This, I believe, is why 99th percentile performance dives so hard at 4K Very High for the R9 Fury X, as it only has 4GB of VRAM compared to 6GB on the GTX 980 Ti. But considering where the GTX 980 places – above the R9 Fury X – I also believe there’s more than just VRAM bottlenecking occurring here. The GTX 980 sees at least marginally better framerates with the same size VRAM pool (and a lot less of almost everything else), which leads me to believe that AMD’s drivers may be holding them back here. Certainly the R9 290X comparison lends some possible credit to that, as the 99th percentile gains are under 20%. Regardless, one wouldn’t expect to be VRAM limited at 1440p or 4K without MSAA, especially as this test was not originally designed to bust 4GB cards.