Parhelia - It's 1 Week Away

We were starting to get worried there; when we first talked to Matrox about Parhelia they mentioned that they would try to have boards in our hands before the end of May. We didn't hear anything for a while and just yesterday received an update, and today we got our card. 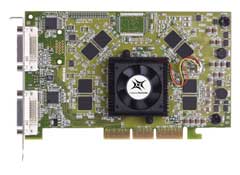 Our performance analysis of the card will be published on June 25th, exactly one week from today. The reason for Matrox's decision to set a NDA of the 25th is so that when reviews are published, you should be able to actually purchase a card. Parhelia boards will be available sometime next week according to Matrox.

The hardware we were sent is final hardware running RC1 drivers; we expect final drivers to be in our hands by next week. Here are the final specifications of the hardware:

The first thing you'll notice is that the retail Parhelia has a fairly low core clock. This means that unless you're really stressing its memory bandwidth or texture unit advantages, the Parhelia's performance will be proportional to the clock speed difference between it and the GeForce4 (since they both have four rendering pipes).

The core clock is a bit lower than what Matrox expected, with 220MHz being even lower than our original 250MHz estimate. You have to remember that this is a very large chip and thus clock speeds will be limited. The price is a tad lower than originally anticipated as is the memory clock (presumably to keep the price under $400).

The OEM version will differ from the retail version in clock speed, unfortunately at this time it won't be branded any differently. We have already talked to Matrox and recommended that they add a suffix onto the name of the OEM cards to avoid confusion.

There's much more to talk about but we'll save that for next Tuesday; until then, be sure to beef up your knowledge of Parhelia by reading our overview of the technology.