The Most Exciting part of CATALYST

You can download the CATALYST drivers for yourself and evaluate their performance, which is slightly higher than the previously available releases. But that's not what interested us the most about ATI's latest driver release; what got us drooling was the that with the launch of CATALYST, ATI finally delivered on a promise they made months ago: a DVI-to-Component Video Adapter is finally ready and supported in the new CATALYST drivers.

HDTV owners have been waiting for such an adapter from ATI ever since they originally told us they'd be making one last November. The excitement surrounding a component video adapter for HDTV owners is huge for a number of reasons:

- Several HDTVs line-double their non-component (Y/Pb/Pr) inputs since they assume that if you have a Composite or S-Video connection you will be feeding the TV an interlaced signal. The end result is that you're taking your non-interlaced/progressive video from your PC, interlacing it and then line-doubling it which ends up looking horrible. This makes TV output on PC graphics cards useless if you have a HDTV that line-doubles all inputs without a method of disabling it.

- You can't get HD resolutions (480p, 720p, 1080i) on non-component inputs which completely defeats the purpose of having a HDTV. Once again you're left with a TV that is capable of displaying great pictures but is forced to display horribly blurry text.

- Converting DVI/VGA to Component (Y/Pb/Pr) is very simple; all you need is a device that reprograms the RAMDACs to output Y/Pb/Pr signals instead of R/G/B and you've got a very cheap-to-manufacture component output dongle. Most VGA-to-Component transcoders that are available for sale are priced at over $100. 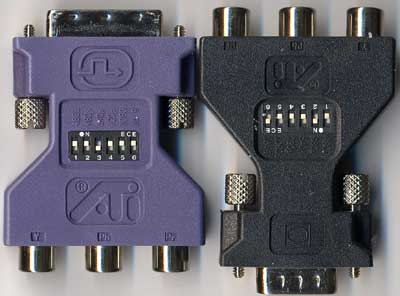 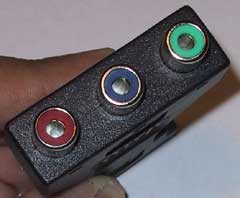 The two adapters are the same in terms of functionality; they only differ in size and one side of the connector (VGA/DVI). 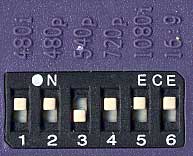 A row of dip switches on the face of the connector controls the HD mode the adapter will output in. The current list of resolutions are: 480i, 480p, 540p, 720p and 1080i with a separate toggle for 16:9 aspect ratios. Currently 540p does not work however ATI expects to have that cleared up in a future software release.