As the GM200 flagship card, GTX Titan X gets the pick of the litter as far as GM200 GPUs go. GTX Titan X needed fully-functional GM200 GPUs, and even then needed GPUs that were good enough to meet NVIDIA’s power requirements. GTX 980 Ti on the other hand, as a cut-down/salvage card, gets second pick. So we expect to see these chips be just a bit worse; to have either functional units that came out of the fab damaged, or have functional units that have been turned off due to power reasons.

Looking at voltages, we can see just that in our samples. GTX 980 Ti has a slightly higher boost voltage – 1.187v – than our GTX Titan X. NVIDIA sometimes bins their second-tier cards for lower voltage, but this isn’t something we’re seeing here. Nor is there necessarily a need to bin in such a manner since the 250W TDP is unchanged from GTX Titan X.

The far more interesting story here is GTX 980 Ti’s clockspeeds. As we have pointed out time and time again, GTX 980 Ti’s gaming performance trails GTX Titan X by just a few percent, this despite the fact that GTX 980 Ti is down by 2 SMMs and is clocked identically. On paper there is a 9% performance difference that in the real world we’re not seeing. So what’s going on?

Ultimately the higher clockspeeds are a result of the increased power and thermal headroom the GTX 980 Ti picks up from halving the number of VRAM chips along with disabling two SMMs. With those components no longer consuming power or generating heat, and yet the TDP staying at 250W, GTX 980 Ti can spend its power savings to boost just a bit higher. This in turn compresses the performance gap between the two cards (despite what the specs say), which coupled with the fact that performance doesn't scale lineraly with SMM count or clockspeed (you rarely lose the full theoretical performance amount when shedding frequency or functional units) leads to the GTX 980 Ti trailing the GTX Titan X by an average of just 3%. 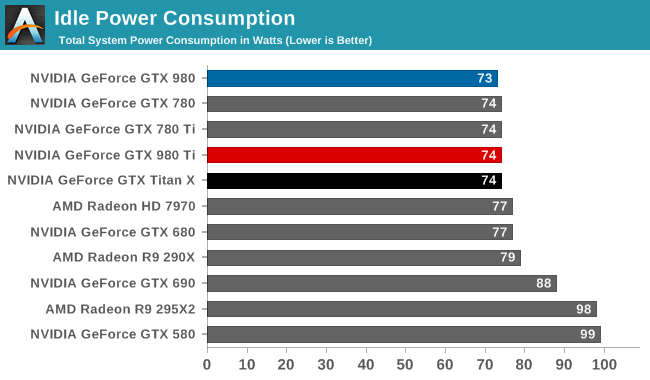 Starting off with idle power consumption, there's nothing new to report here. GTX 980 Ti performs just like the GTX Titan X, which at 74W is second only to the GTX 980 by a single watt. 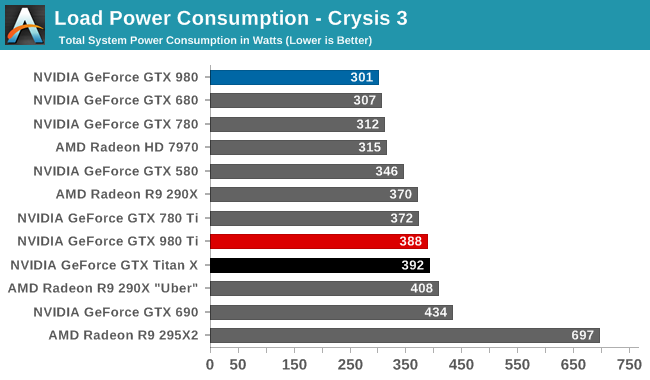 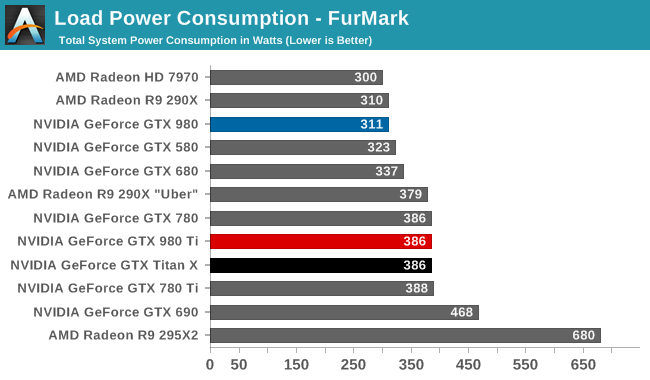 Meanwhile load power consumption is also practically identical to the GTX Titan X. With the same GPU on the same board operating at the same TDP, GTX 980 Ti ends up right where we expect it, next to GTX Titan X. GTX Titan X did very well as far as energy efficiency is concerned – setting a new bar for 250W cards – and GTX 980 Ti in turn does just as well. 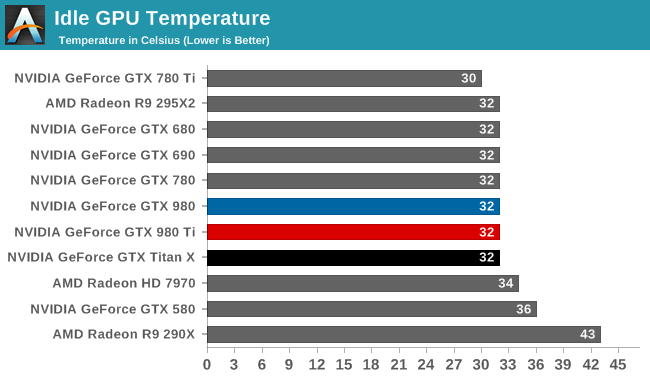 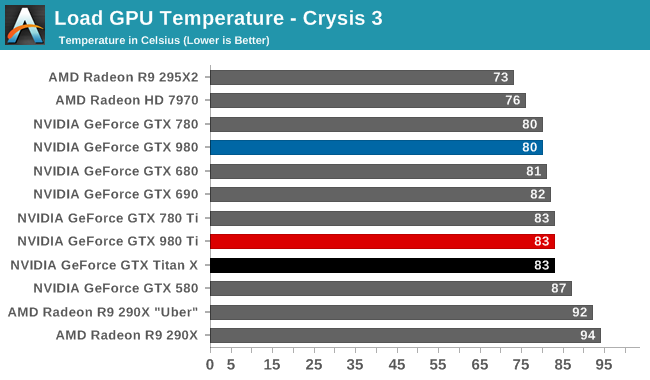 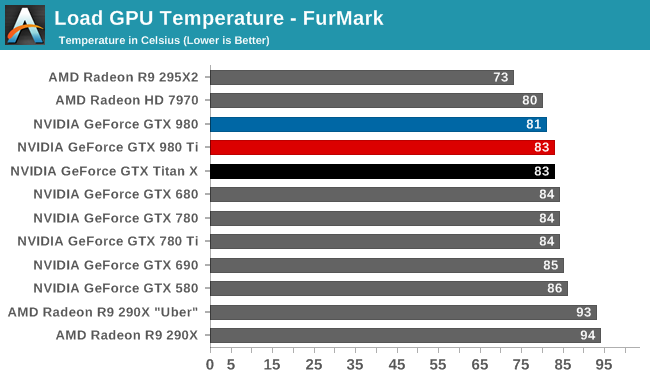 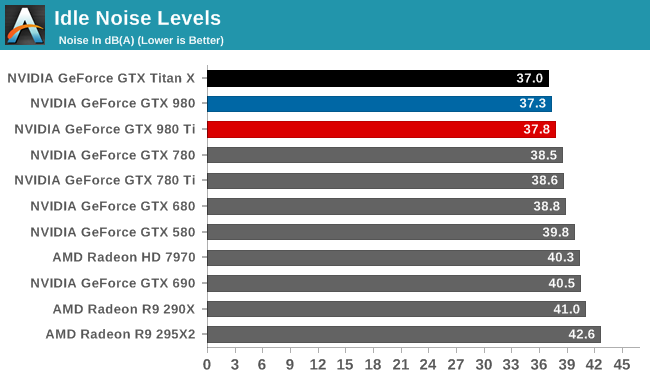 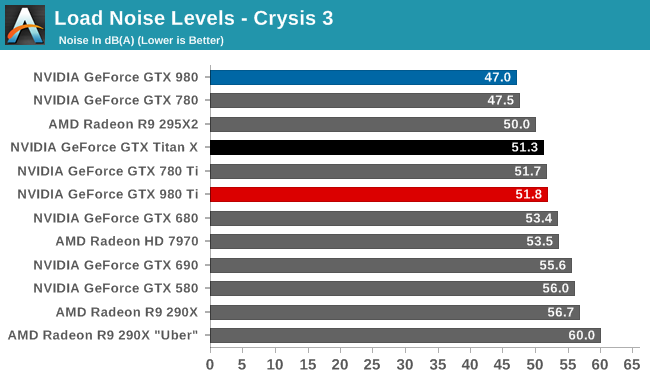 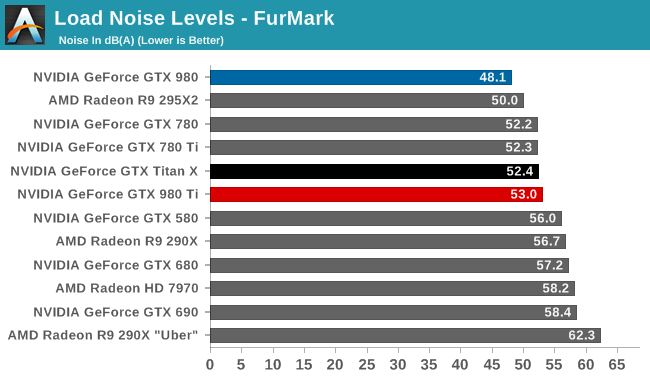 Finally for noise, the situation is much the same. Unexpected but not all that surprising, the GTX 980 Ti ends up doing a hair worse than the GTX Titan X here. NVIDIA has not changed the fan curves or TDP, so this ultimately comes down to manufacturing variability in NVIDIA’s metal cooler, with our GTX 980 Ti faring ever so slightly worse than the Titan. Which is to say that it's still right at the sweet spot for noise versus power consumption, dissipating 250W at no more than 53dB, and once again proving the mettle of NVIDIA's metal cooler.