The final game in our review of the GTX 980 Ti is our most recent addition, Grand Theft Auto V. The latest edition of Rockstar’s venerable series of open world action games, Grand Theft Auto V was originally released to the last-gen consoles back in 2013. However thanks to a rather significant facelift for the current-gen consoles and PCs, along with the ability to greatly turn up rendering distances and add other features like MSAA and more realistic shadows, the end result is a game that is still among the most stressful of our benchmarks when all of its features are turned up. Furthermore, in a move rather uncharacteristic of most open world action games, Grand Theft Auto also includes a very comprehensive benchmark mode, giving us a great chance to look into the performance of an open world action game. 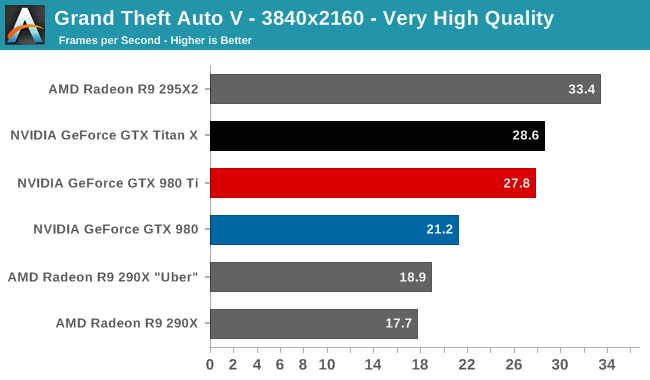 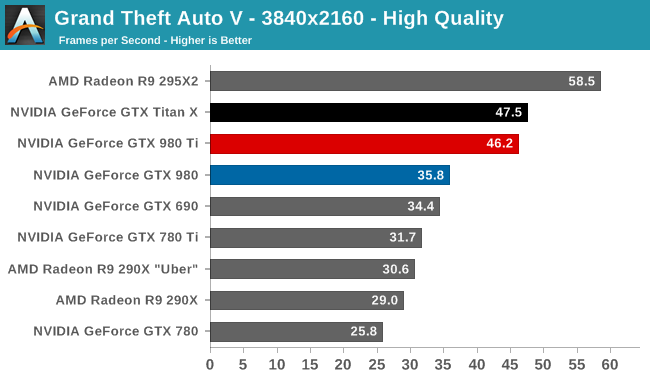 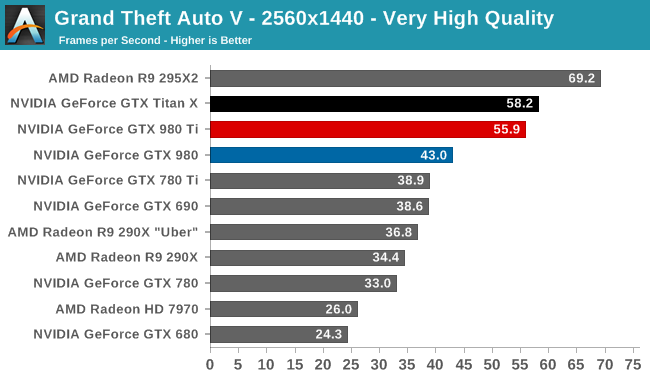 After initially expecting Grand Theft Auto to be a walk in the park performance wise, the PC version of the game has instead turned out to be a very demanding games for our GPUs. Even at 1440p we can’t have very high quality with MSAA and still crack 60fps, though we can get very close.

Ultimately GTA doesn’t do any better than any other game in setting apart our GM200 cards. GTX 980 Ti trails GTX Titan by 4% or less, essentially the average outcome at this point. Also average is the GTX 980 Ti’s lead over the GTX 980, with the newest card beating the older GTX 980 by 29-31% across our three settings. Finally, against the GTX 780 the GTX 980 Ti has another strong showing, with a 69-79% lead.

On an absolute basis we can see that at 4K we can’t have 4x MSAA and even crack 30fps on a single-GPU card, with GTX 980 Ti topping out at 27.8 fps. Taking out MSAA brings us up to 46.2fps, which is still well off 60fps, but also well over the 30fps cap that this game was originally designed against on the last-generation consoles. 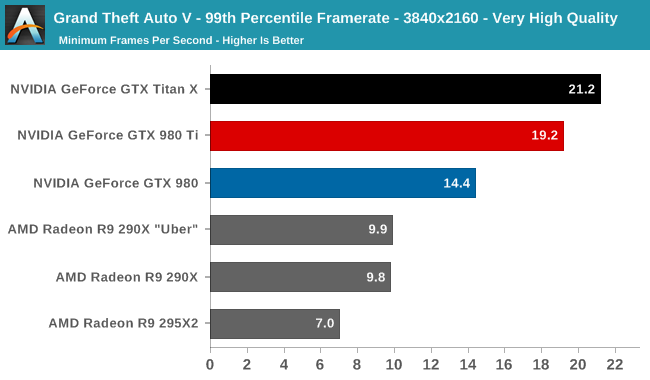 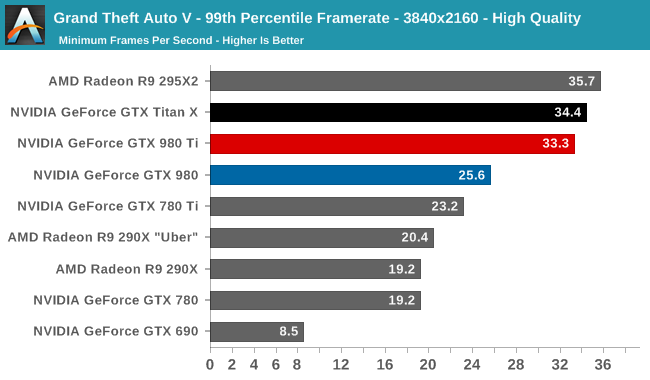 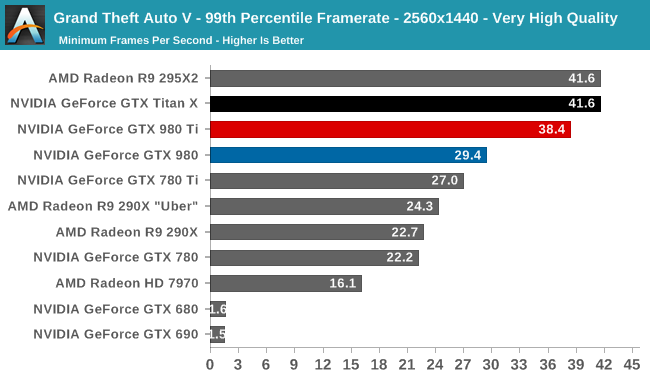 Along with an all-around solid benchmark scene, the other interesting benchmarking feature of GTA is that it also generates frame percentiles on its own, allowing us to see the percentiles without going back and recording the game with FRAPS. Taking a look at the 99th percentile in this case, what we find is that at each setting GTA crushes some group of cards due to a lack of VRAM.

At 4K very high quality, 4GB cards have just enough VRAM to stay alive, with the multi-GPU R9 295X2 getting crushed due to the additional VRAM requirements of AFR pushing it over the edge. Not plotted here are the 3GB cards, which saw their framerates plummet to the low single-digits, essentially struggling to complete this benchmark. Meanwhile 1440p at high quality crushes our 2GB cards, with less VRAM than a Radeon HD 7970 falling off of the cliff.

As for what this means for the GTX 980 Ti, the situation finds the GTX 980 Ti trailing the GTX Titan X in 99th percentile framerates by anywhere between 3% and 10%. This test is not designed to push more than 6GB of VRAM, so I’m not entirely convinced this isn’t a wider than normal variance (especially at the low framerates for 4K), though the significant and rapid asset streaming this benchmark requires may be taking its toll on the GTX 980 Ti, which has less VRAM for additional caching.