The Interior of the SilverStone Fortress FT05

Latches hold the side panels in place and simply pressing on them and pulling the panel upwards is enough to remove it, as there are no screws involved. Both side panels feature a layer of sound absorbing material. A little force may be necessary to move the panels though, due to the fact that the insulation on the side panels acts as a sealant between the panel and the chassis, creating significant friction during removal. 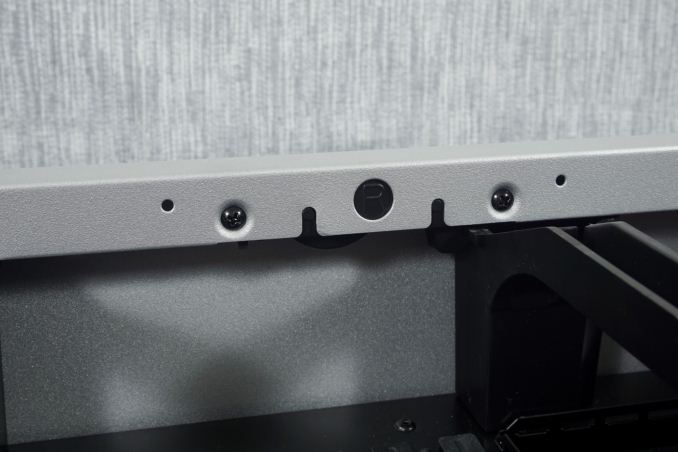 Once the side panels are off, the miniscule internal volume of the Fortress FT05 becomes apparent. With a large area at the top of the case reserved for the routing of cables and another area at the bottom reserved as an air intake, the interior is barely larger than the motherboard tray itself. Everything inside the case is black, including the plastic drive cage, the fans and the cables. The motherboard tray is rotated by 90°, with the rear of the motherboard facing straight up. There are numerous openings, a large one for the installation of CPU coolers and several small ones for the routing of cables. No openings have rubber grommets. Mechanically, the strength of the Fortress FT05 is exceptional, with no apparent flex. This was no surprise, considering the small dimensions and extensive use of metallic materials. 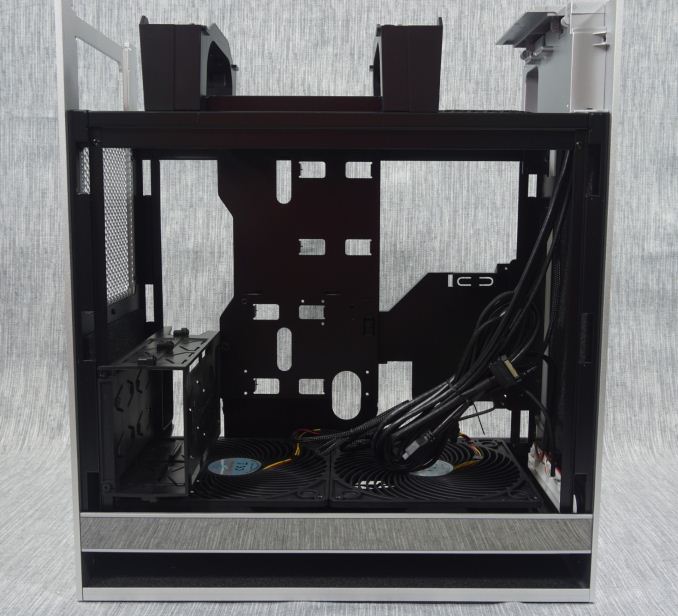 There are two plastic arches at the top of the case, above the motherboard tray. Their primary task is to be used as guides for the cables but they are very sturdy and can easily hold the weight of the case, so they can be used as handles as well. In order to reach some screws, the screwdriver needs to go through the holes of these arches. A screwdriver with an 100mm long shank will suffice but thick shanks (e.g. insulated screwdrivers, bit extension rods, etc.) may not fit through the arch hole. 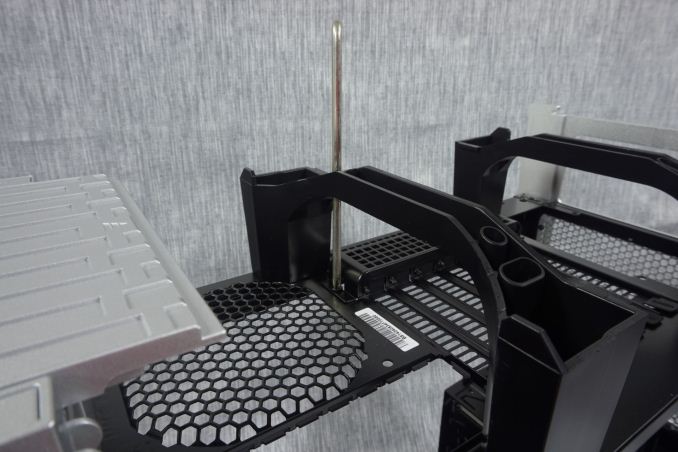 Much as with the Raven RV05, the Fortress FT05 has two 180mm SST-AP181-H fans preinstalled at the bottom of the internal area. Due to their wing size, the CFM rating of these fans is 130CFM, an absurd figure considering that they can only reach a maximum speed of 1200RPM. However, this is their maximum CFM rating, which means that the fans need to be completely unobstructed and operating under specific environmental conditions. Inside the case and behind a filter, the actual air delivery will not be half as much. The dense spiraling finger guard will reduce the actual airflow even further but it is very practical inside the Fortress FT05, as a large number of cables will surely be routed right above the fans.

In order to install a 240mm or 280mm liquid cooling radiator, these fans need to be removed. However, it might not be a good idea, as the airflow will be greatly reduced and the temperature of the air intake will be increased. This could work in systems where the only major thermal load is the CPU but it could create more problems than it would solve if there are powerful GPUs or a stressed/overclocked motherboard installed. A smaller radiator (up to 120mm and thin) may fit at the smaller opening at the top of the case, but the proximity of the motherboard can create compatibility issues. 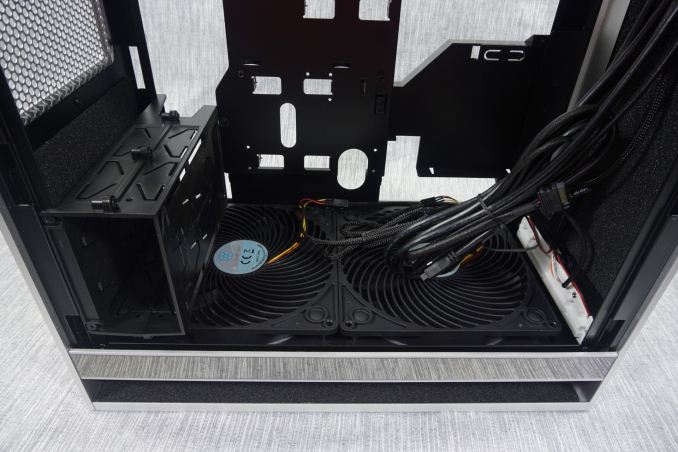 The Fortress FT05 can hold only two 3.5" devices, in a plastic cage located at the rear of the system. Simply sliding the two 3.5" drives into the cage works, but there are screw holes for a more secure installation as well. If no 3.5"  drives are present, the cage can be removed to increase the internal volume of the case and to enlarge the clearance of the PSU. 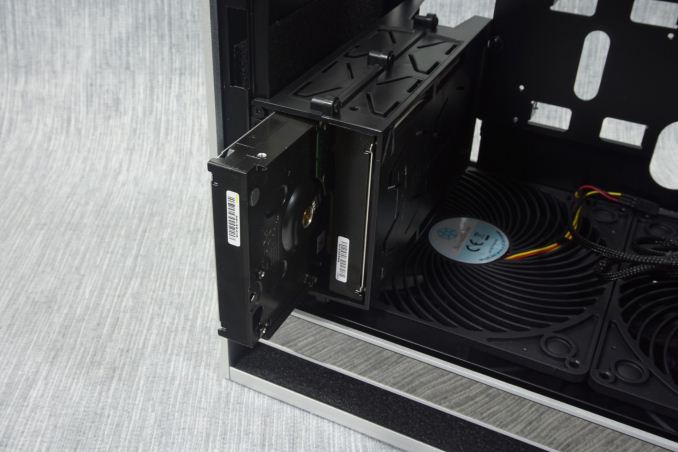 There is a little extra space at the rear of the motherboard tray reserved for two 2.5" devices and for the routing of cables. If both 2.5" devices are installed, there is very little space left for cables. With virtually no clearance between the drives and the side panel, the routing of the cables becomes a small nightmare. The plastic compartment to the left of the motherboard tray is for the slim slot-loading drive, should the user decides to install one. It will have to be removed if a CPU cooler needs to be installed with the motherboard inside the case. 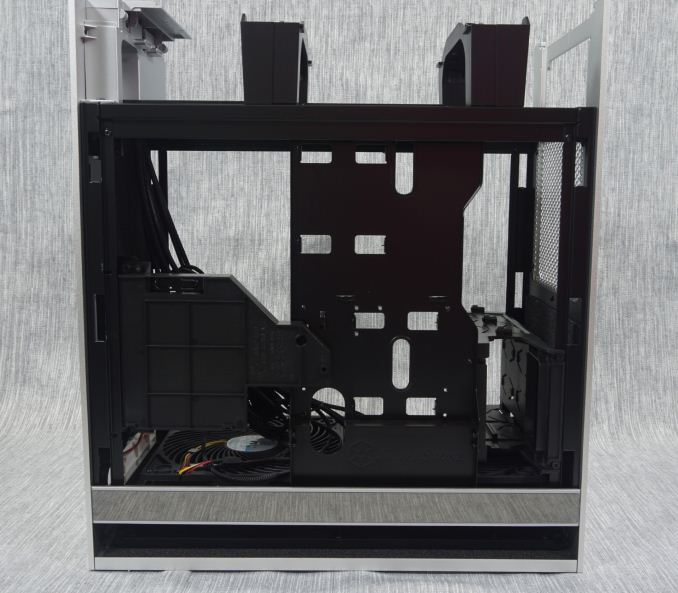 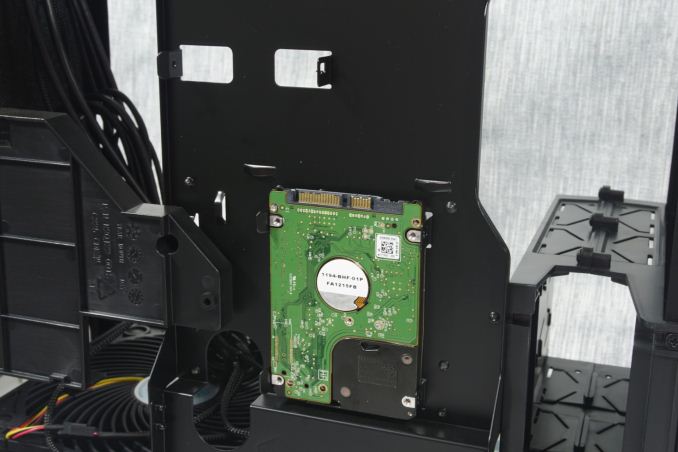 The PSU compartment is at the upper rear side of the case and the PSU is installed with its exhaust facing upwards. PSUs up to 170mm long may fit, limiting the possible choices to low and medium power models, but these ought to be more than sufficient for the systems that can painlessly fit inside the Fortress FT05. Since the space is very limiting, we initially tried to install a SilverStone SX600-G, a 600W SFX modular PSU. It comes with an ATX adapter and it seemed like a good choice for such a case, but the cables of the PSU were far too short to be of use, as the distance between the PSU area and across the length of an ATX motherboard proved too great. We installed the usual PSU that we are using for our case reviews instead, the Corsair AX760i with the red cable set, for visual contrast. The PSU fit very tightly and it is all but impossible to install/remove modular cables once the PSU is in. We strongly recommend using a PSU up to 150-155mm long maximum with the Fortress FT05. SilverStone's Strider Gold S 550W and 650W units are just 140mm long and should be a very good fit. 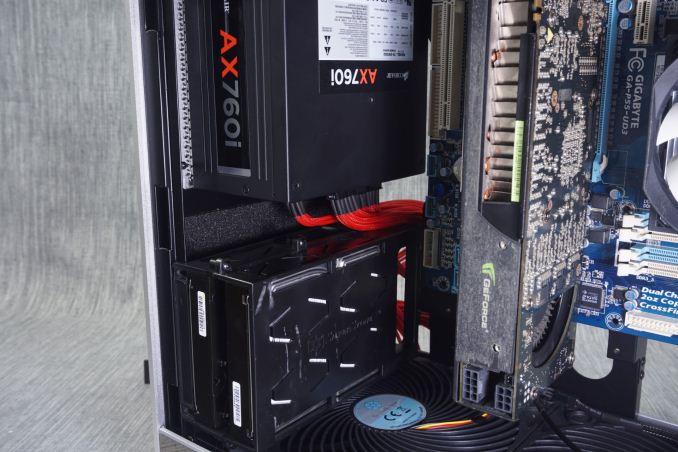 Even with just one GPU installed, the interior of the Fortress FT05 appears overly tight and cramped. There are very few cable pathways and most are bound to be routed right in front of the intake fans. There is also no opening for the CPU power cable (or, to be exact, the opening is far too small) and the cable needs to go across the motherboard in order to reach the connector. Graphics cards up to 310mm can fit, which covers most cards but rules very high performance models and dual GPU implementations, which are not exactly intended to be installed in such a confined case. Multiple graphics cards can also be installed but it is no coincidence that only a single larger opening for the PCI Express power cables exists. This case is not intended to be used as the home of a multi-GPU gaming monster, it has been primarily designed to hold a normal ATX motherboard and up to a single good graphics card. 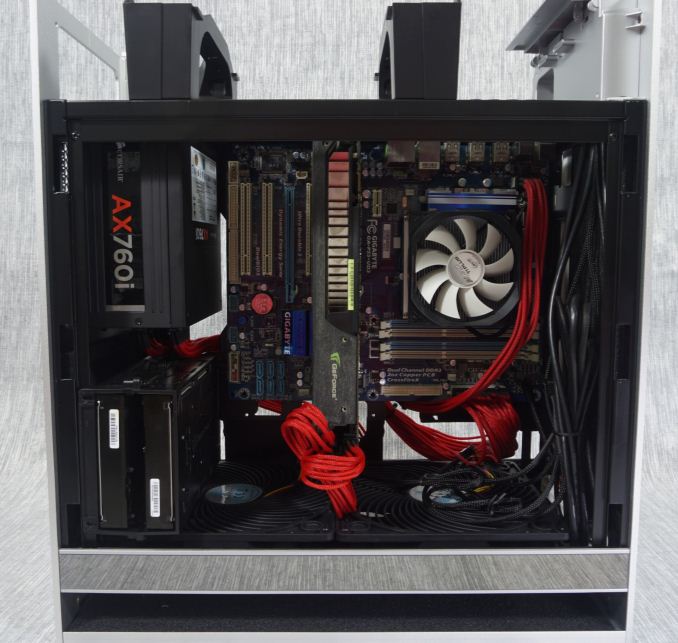