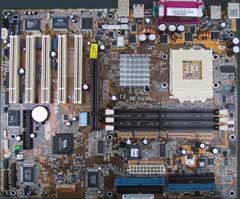 ASUS has been a favorite of ours for quite some time; their commitment to engineering excellence has given them a leg up on the competition when it comes to competency in board manufacturing.

The A7V333 is a fairly standard motherboard from ASUS that manages to attain a good balance between an attractive board for OEMs as well as an enthusiast-class solution. You'll quickly notice ASUS' OEM roots with the passive cooling on the KT333 North Bridge; no fans means fewer potential failures while in use, so ASUS went to a larger heatsink, but without a fan on the North Bridge. This fanless design makes a lot of sense and it's quite common on Intel-based motherboards for some reason, we'd like to see the same continue in boards from other manufacturers as well. Oftentimes, manufacturers will use cheap North Bridge fans, which end up contributing to a noisy system, something ASUS has also managed to eliminate with this design. 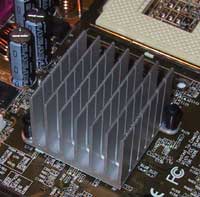 Continuing along with the elegance theme, ASUS is one of the first motherboard manufacturers to implement serious thermal protection on their Socket-A motherboards. The A7V333 reads from the Palomino/Thoroughbred's on-die thermal diode and can be set to automatically trigger a shutdown if the internal core temperature gets too high. Just as with the passive North Bridge cooling mentioned above, we'd like to see more motherboard manufacturers follow in ASUS' footsteps with this design.

The board features a single AGP Pro50 slot and 5 PCI slots. The AGP Pro50 slot really only makes sense for workstation-users, as the only cards that require it are made by 3D Labs. Of the three memory slots that are on-board, we were happy to find out that you can populate all three, without sacrificing the stability of the motherboard. Unfortunately here is also where we ran into the first problem with the A7V333; the board will not work with Kingston's DDR333 ValueRam at DDR333 speeds, though the same memory worked fine in all other motherboards. We've brought up the issue with ASUS but have not received an answer yet. We're not sure whether the problem is related to Kingston or ASUS at this point; seeing as how the memory worked fine in every other motherboard we're betting the blame is with ASUS for this one. The board worked just fine with all of the other DDR333 memory we tested.

VIA's 6202 USB 2.0 controller powers the A7V333's USB ports, four of which are located on the motherboard with another two present on an external bracket. A Texas Instruments Firewire controller is to the right of the VIA USB 2 chip. ASUS bundled a separate bracket with the board that has both 6-pin and 4-pin Firewire connectors; this bracket obviously takes up a slot cutout in the rear of your case, but the inclusion of both 4-pin and 6-pin ports are useful since 4-pin to 6-pin cables are much more common than 6-pin to 6-pin cables.

An unfortunate oversight by ASUS is the lack of any on-board Ethernet on the A7V333. With the prevalence of home networks and broadband internet, we would assume ASUS would find that a more valuable feature than the on-board Firewire, if they had to make a choice between the two.

On-board audio is driven by ASUS's favorite 6-channel C-Media chip. The three 1/8" jacks at the rear of the board are reconfigurable to provide rear/LFE analog outputs. Unfortunately, there's no digital audio connector (RCA or optical) bundled with the A7V333. 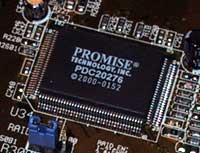 The final point of integration comes from the Promise PDC20276 Ultra ATA 133 RAID controller. Our biggest issue with this RAID controller is that it does not offer the ability to select different stripe sizes other than 64KB and thus limits performance tremendously (64KB stripe sizes are far from ideal for most desktop applications). The other problem we have with the ASUS board is that you cannot disable the Promise BIOS from loading, which increases boot time tremendously as the controller searches for any devices attached to it. A simple BIOS option that most other motherboard manufacturers offer would clear up this frustration in an instant. You can disable the controller through an on-board jumper but it's much more convenient to have the option in the BIOS.

Normally, we don't complain too much about layouts, unless there are some serious issues which was the case with the A7V333. For starters the CPU socket is oriented in such a way that almost all DIMMs must be removed in order to install a heatsink. The other issue we had with the layout of the board was that the CPU fan connector is very far away from the CPU socket. You can either use an extension on the CPU fan connector or reorient the fan so that the cable is closest to the fan connector on the motherboard.

The A7V333 BIOS is fairly configurable allowing for 1MHz FSB increments and core voltage control. You don't get control of AGP or DDR voltage in the BIOS but neither of those is too helpful in overclocking your system.

ASUS was one of the first boards to offer Thoroughbred support, though the version of the BIOS that is currently available wouldn't allow us to change the core voltage of the Thoroughbred processor. Although you can adjust the setting, the actual voltage being fed to the processor was never adjusted; we're hoping this is a BIOS issue and will be fixed shortly.

Other than the issue with Kingston memory, the A7V333 exhibited no stability problems during our testing even with all three DIMM slots populated.