Huawei spent a lot of time to talk about the P8's camera as it probably represents the single biggest upgrade over past models. Huawei only recently experimented with an exotic dual-camera system in the form of the Honor 6 Plus, but such a system still brings some disadvantages with it, such as the impossibility to have any kind of optical image stabilization.

The P8 goes back to a more traditional single-camera system, but Huawei opted to integrate a new innovative RGBW sensor coupled with a performant OIS implementation for its new camera module. 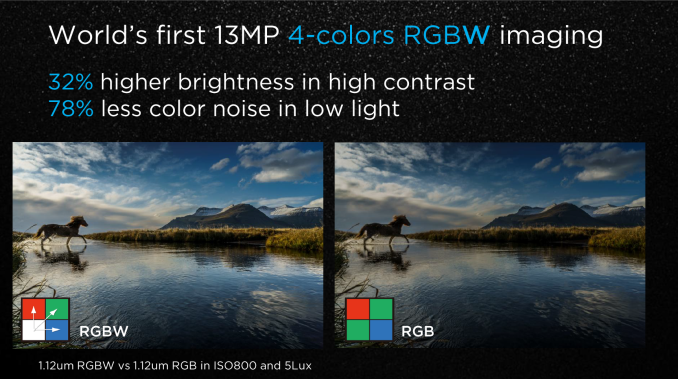 We already had experience with non-Bayer (RGBG or RGGB) image sensors in the form of OmniVision's OV10820 sensor in the original Motorola Moto X. So while it's technically true that the P8 sports the first 13MP RGBW sensor, it's not the first RGBW sensor out there.

RGBW or also sometimes referred to as RGBC (C for clear) sensors are supposed to be able to increase the sensitivity of the image sensor by repurpusing one of the green sub-pixels of the normal Bayer arrangement with a white/clear one that is more sensitive to luminance than the conventional coloured sub-pixels.

The sensor in the P8 is provided by Sony in the form of the IMX278. We don't have any public information on this piece as Sony hasn't officially announced it yet, but Chipworks has a very recent teardown in which they confirm 1.12µm pixel size and DTI (Deep Trench Isolation). DTI has by now become standard in high-end sensors and both the IMX214 and IMX240 also feature it. Most famously SLSI markets the technology as Isocell in its camera sensors and have seen its use in the S5K2P2 sensor of the S5 and S6.

Sony had previously tried to make an RGBW sensor before in the form of the original IMX135, but the piece was later on downgraded to a traditional Bayer sensor before it was launched in devices such as the Galaxy S4.

The OmniVision sensor of the Moto X suffered from severe colour artifacts and this led to some loss of confidence in the technology as this seemed an inevitable side-effect of the sub-pixel layout. Luckily in my time with the P8 I haven't noticed any such issues, and the IMX278 seems to perform very well in low-light conditions. 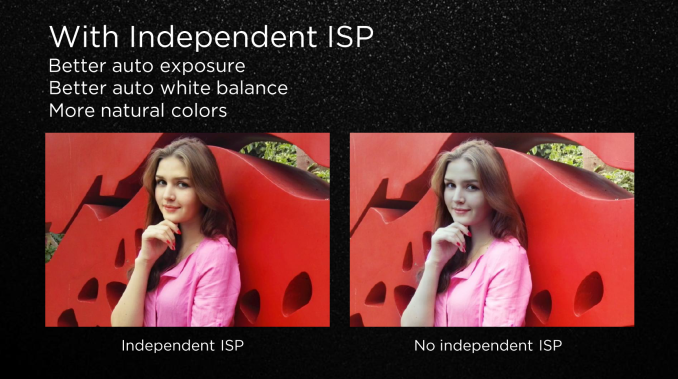 The Kirin 920's build-in ISP performance in the Mate 7 and Honor 6 was another huge weak-point that Huawei has since addressed. The Honor 6 Plus already re-introduced an external ISP by Altek, and the P8 again includes a similar Altek AL6010 chipset. 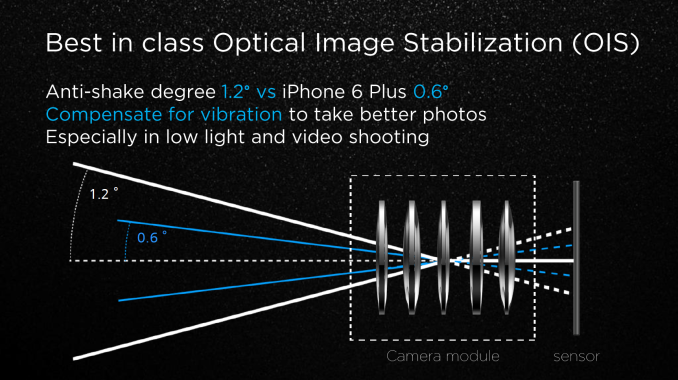 Finally, Huawei claims that its OIS implementation is superior with 1.2° angle of movement, but this isn't as much as an advantage over other devices than it is over the iPhone 6 Plus. LG's G4 camera system now for example offers a 3-axis OIS implementation with up to 2° freedom of movement, making it the current holder for the title of best-in-class OIS system.

On the lens system, Huawei keeps the camera's aperture to F/2.0 as in the Mate 7/Honor6. The 35mm effective focal length slightly rises to 29mm, making the P8's field-of-view a tiny bit narrower than previous models. 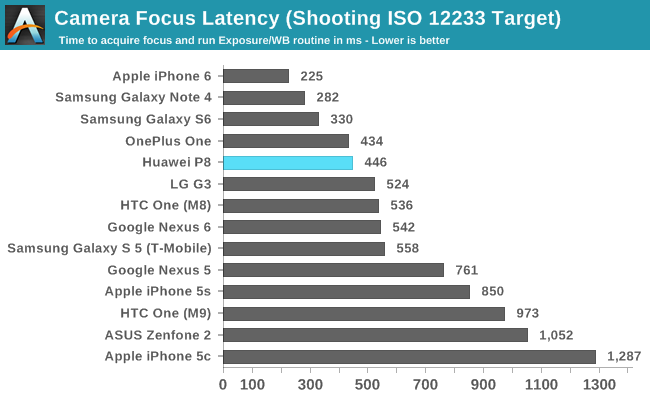 Moving on to the hardware focusing and capturing performance in which we target an ISO12233 chart under high luminance. The P8 here performs well as it's able to focus in a best case of 446ms. 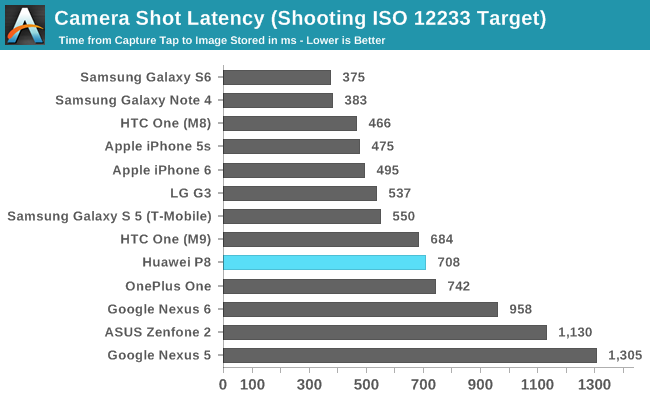 Capture latency is average, as it takes a focused target about 708ms from the moment the tap for capture is registered to having the image stored. In everyday usage, the P8 performs well in terms of capture speed and doesn't have any outstanding issues in that regard.

The camera interface of the P8 largely carries over what we've seen on the Mate 7. The basic viewfinder is minimalistic and keeps elements to a minimum. Swiping left/right, or up/down when in horizontal mode will change the capture mode between standard Photo, Beauty or Light-painting mode for still-picture capture, and basic Video and Time-Lapse modes for video capturing. 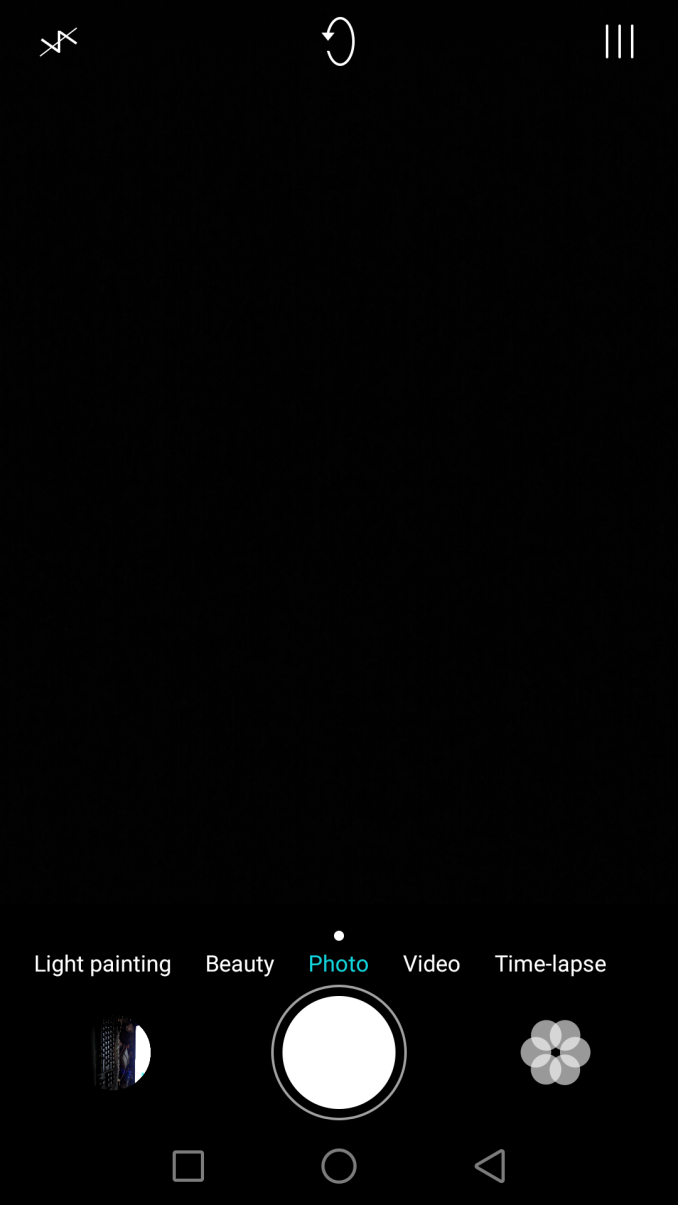 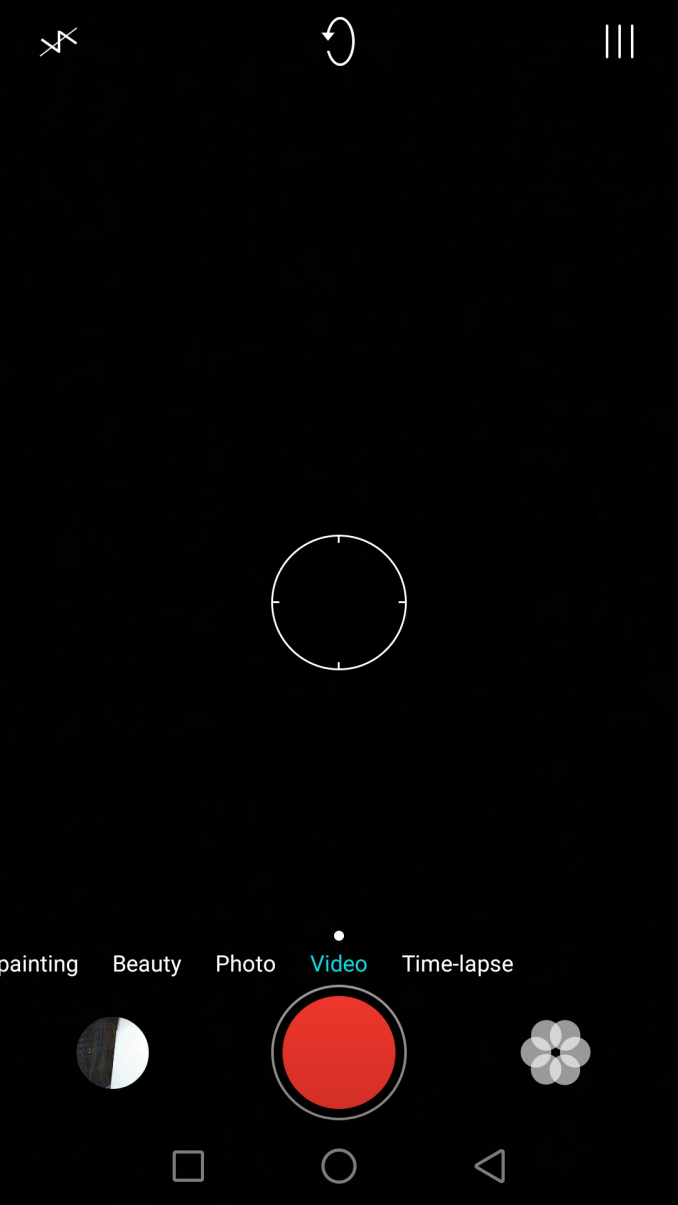 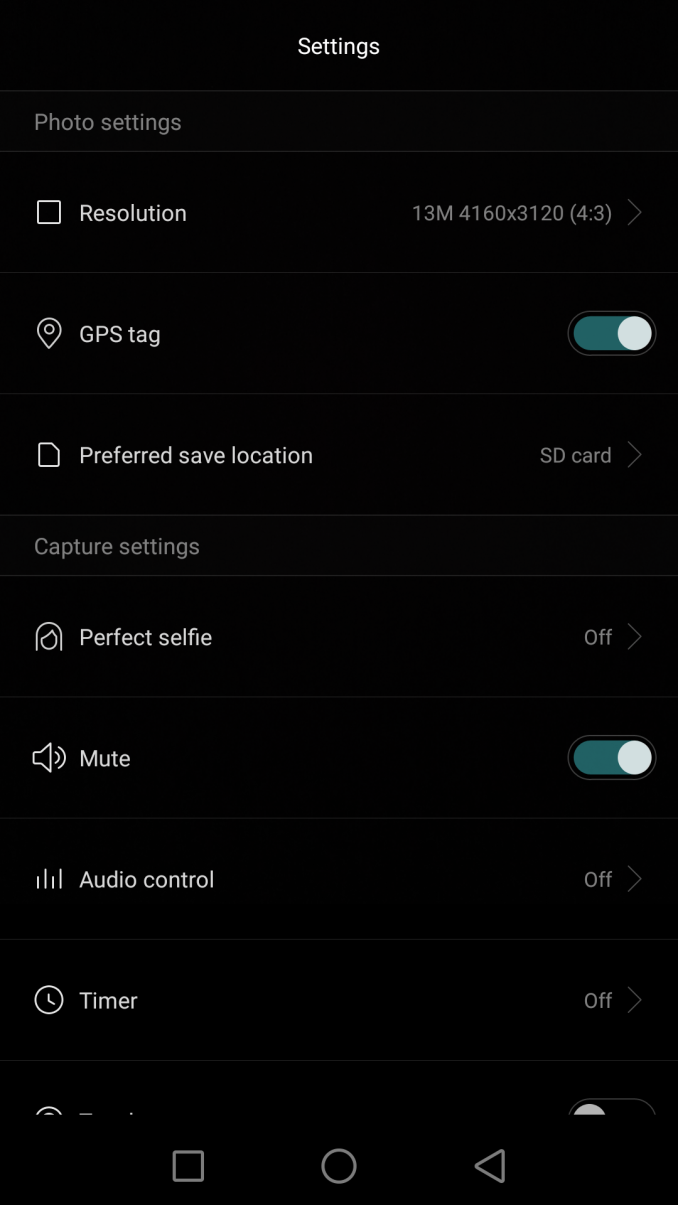 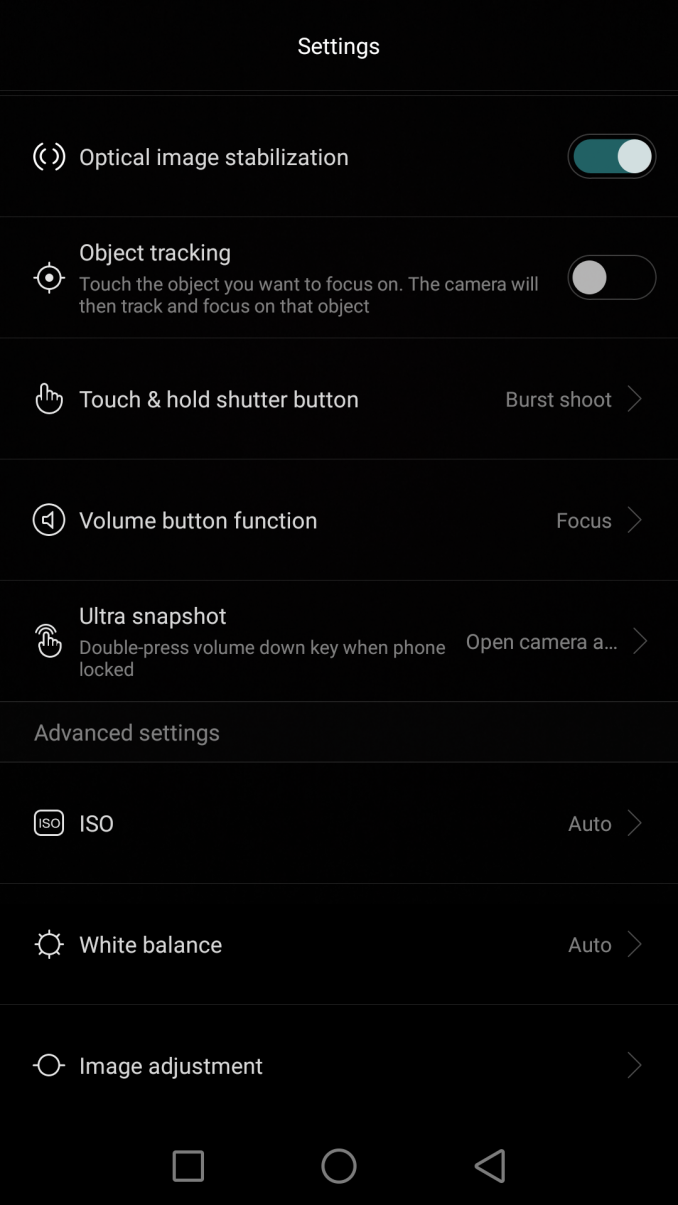 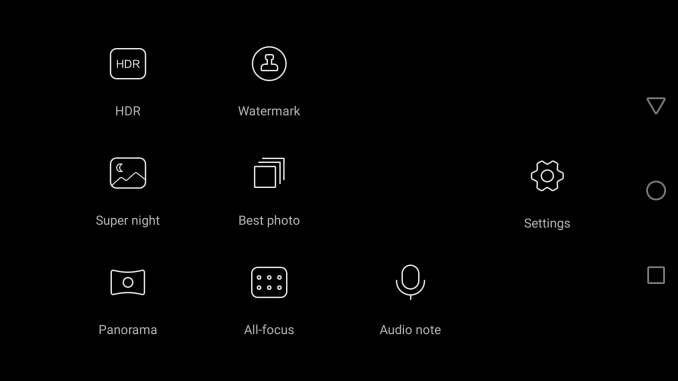 Huawei exposes the same limited camera controls as on the Mate 7 - meaning a choice of ISO, white balance and further slides that adjust exposure, saturation, contrast and overall brightness. Sadly these options are not true camera adjustment knobs as they don't expose any actual values to the user. Their location deep in the settings menus also make them unusable in every-day operation.

The settings menu option are contextualized depending on the current shooting mode, and it will remember the settings of that particular mode. And interesting option here is the ability to turn on and off OIS for still picture capture. Normally this doesn't make any sense as you would never want to really turn OIS off, but it gives us a rare opportunity to see the impact of OIS on image quality as we'll later see in the still image analysis.

Overall Huawei's camera interface seems outdated - this would have been a nice UX 2 years ago, but since then other vendors have continually raised the bar, as seen in LG's G4 or Samsung's Galaxy S6. It is a pity because the P8's camera hardware would definitely deserve a software worthy enough to take full advantage of its capabilities.

Again going back to the video performance of the Mate 7 and Honor 6, Huawei presented one of the worst video quality available at the time. This was undoubtedly due to limitations of the SoC's internal ISP, especially aggravated in HDR and EIS modes.

The P8 manages to improve immensely in video capture quality in all modes as long as you don't enable the EIS mechanism:

The image quality when not enabling EIS is good but seems to be severely limited by the native encoding of the video files, as it caps out at 9566Kbps on a AVC Baseline L4.0 codec. Audio is recorded at stereo 96Kbps 16bit 48KHz in an AAC encoding. As with previous Huawei devices, the audio quality is excellent and among one of the best devices in terms of clarity.

As mentioned in the UX section, Huawei allows one to disable OIS in the settings for video recording. This might be useful for niche users who would like to do their on software stabilization: the stock OIS still has issues with image yaw, as we see the 2-axis gyro doesn't perform too well in that regard. For practical uses, one would never want to disable OIS as the improvement to the non-stabilized image is clearly evident.

Enabling EIS on top of OIS makes it possible to alleviate the image yaw, but the cost in image quality is too drastic. Here we see again the same drop in image resolution as presented in the Mate 7: the SoC's ISP reserves itself margins on the border of the video stream for EIS compensation, with the resulting video frame no longer being the full resolution that the sensor captured, but a badly upscaled and processed version of the video frame from the ISP. One loses not only a lof of detail due to the upscaling, but also the field of view is narrower. In general I don't see why anybody would ever want to use the EIS (Labelled as "Stabilizer" in the options) mechanism when a phone has OIS at hand.

Another missing feature that is in need of mentioning is the lack of any 4K recording capabilities. It seems that technical difficulties caused by the raw amount of data captured by a camera's sensor makes 4K video still a super-premium feature that has yet to hit the mainstream devices.