How to spot a Thoroughbred

It is in AMD's best interests to move their production to 0.13-micron as soon as possible since it increases profit margins on their wonderful little CPUs. Exactly how small are these things? The first time we saw Thoroughbred a couple of months ago we were simply shocked at how small it was. We had seen the specifications on paper but there's something about reading 80mm^2 and actually seeing a core in person that makes all the difference in the world.

The Thoroughbred core will be introduced at clock speeds that overlap with the older Palomino parts; more specifically, model numbers from 1700+ up to 2200+ will be made available in 0.13-micron Thoroughbred versions. The picture above shows the Thoroughbred with a brown organic package instead of the green substrate that was introduced with the 2100+, eventually all of the CPUs will be built on the green substrate it just so happens that all review samples were built on brown substrates. The only differences are strictly aesthetic.

AMD had to relocate the power regulating capacitors from the Palomino (right) to the top of the Thoroughbred chip simply because it's too difficult to run the wires from the bottom of the chip to the very small 80 mm^2 core.

How will you be able to make sure that the chip you're ordering is a Thoroughbred and not a Palomino core? The designation is actually quite simple; if you look at the Ordering Part Number (OPN) you'll see that Palomino based Athlon XPs followed this general form:

The first two characters were always AX for Athlon XP processors and the first three were AMP for Athlon MP processors. The following four characters represented the clock speed or model number of the processor (for the first Athlon MPs it was clock speed but for all other CPUs it is the model number of the CPU, AMD does not list the clock speed anywhere on the chip itself). The final string of characters provide some information about the core itself but aren't useful in determining whether you have a Thoroughbred or not. 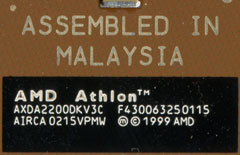 When ordering a Thoroughbred online make sure that the first four characters in the OPN read AXDA instead of simply AX for Athlon XP processors; the 'DA' suffix indicates the new Thoroughbred core. For example, the OPN for our 0.13-micron Athlon XP 2200+ was AXDA2200DV3C.