For many years the limited battery life of smartphones has been the most painful part of their experience. It's never fun to have your smartphone die during the middle of the day, and many users long for the days where their flip phone could last for days or even weeks on a single charge.

Although the battery life of smartphones is still a long way off from the simpler mobile phones of the past, it has improved significantly over devices like the original iPhone which were the first generation of what could be called modern smartphones. Improvements in software optimization and the power consumption of components has improved battery life, and the increasing size of devices has allowed for larger batteries to be used. However, that isn't to say that the battery life of a device can be determined solely by its battery capacity. The total power draw of all the components in a smartphone can vary dramatically from device to device. A great example is the Nexus 6 and the Galaxy Note 4, which have nearly identical specifications on paper but completely different battery life.

While many battery tests often standardize at some percentage on the Android brightness slider such as 50%, that percentage can correspond to various different luminance values. To ensure that the true brightness of each device is equal, all devices are calibrated to a brightness of 200 nits. As usual, we begin with our web browsing battery tests which are more display bound than our fixed CPU and GPU load tests. This test loads web pages on a fixed interval, which gives both the SoC and modem a period of idle time between each page load. This ensures that the test does not penalize certain SoCs for being faster by causing them to do more work. 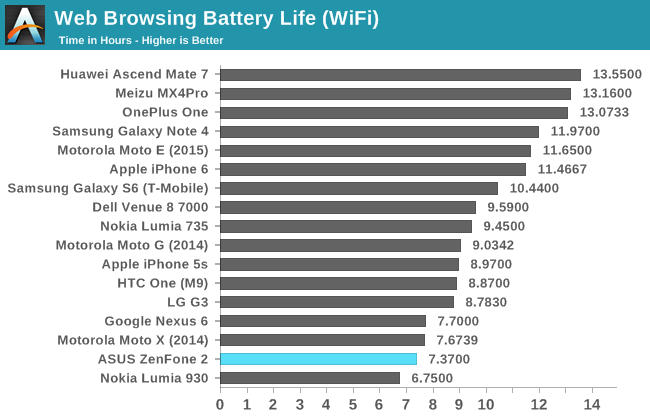 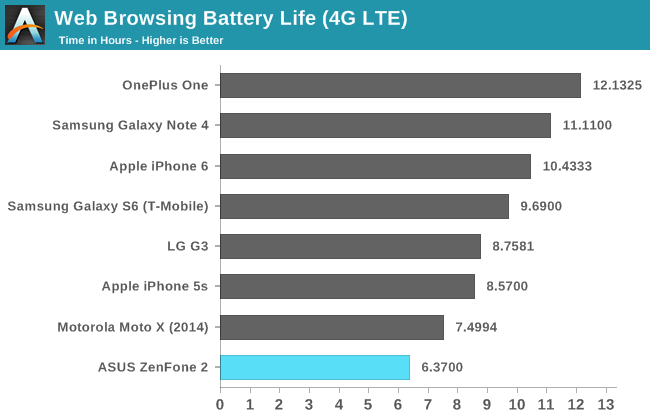 After rounding off a few seconds, the ZenFone 2 gets 7.37 hours in our WiFi web browsing test, and drops by an hour to 6.37 hours when using LTE on band 4. Both of these results are lower than one would expect from the ZenFone 2's fairly large 11.4Wh battery. However, I think there's a reasonable explanation for the results, and it also answers some questions that may have arisen after reading the previous page.

I had two big questions after testing the ZenFone 2's display. The first was "Why does ASUS employ the use of such heavy CABC and dynamic contrast?" The second was "Why does ASUS limit the maximum brightness to around 80% of what the display is capable of?" I think these battery results answer both of them, and ASUS provided some additional information that supports it as well. The display and LED backlight on the ZenFone 2 is likely not as efficient as those on some other smartphones. In our web browsing test the display is by far the largest consumer of power, and yet the OnePlus One with the same display size and resolution achieves a 77% longer run time with only 3% more battery capacity. Even with differences in SoC power usage, the only component such a large gap can be attributed to is the display.

In addition to the likely issues with display power usage, the ZenFone 2 also does not support Panel Self Refresh (PSR), which means that there's additional SoC and display bus power usage compared to smartphones that do support PSR. All of these factors lead to what is ultimately an underwhelming result for a 5.5" device with an 11.4Wh battery. The notable gap between the results on LTE and WiFi also would suggest that XMM7262 isn't quite at the level of Qualcomm's most recent parts when it comes to RF system power, but we would need to do a lot more investigation to draw any solid conclusions. 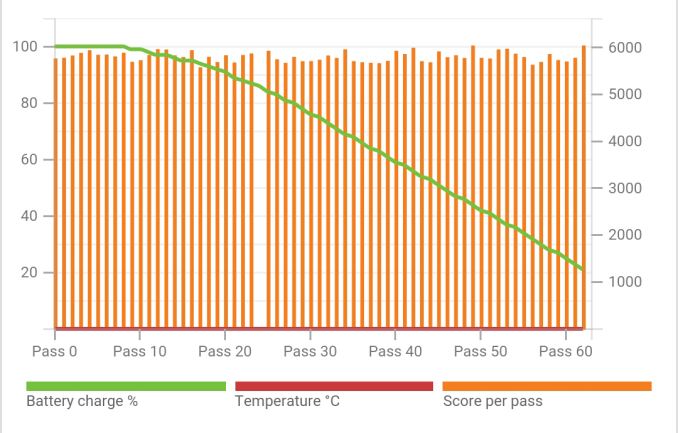 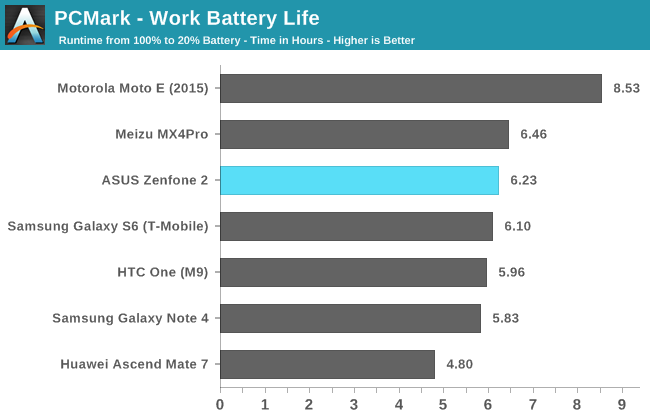 In PCMark's battery life test we see that the ZenFone 2 actually lasts slightly longer than some of our recent flagship devices. This is a favorable result for ASUS, because it shows that in scenarios with mixed usage and varying display APLs the ZenFone 2 doesn't fall behind the competition in addition to sustaining high performance from run to run. However, it should be noted that in those lower APL scenarios the ZenFone 2 is dropping below 200nits of brightness for white in order to reduce display power, which means that the display is actually dimmer than the competition to achieve the same level of battery life in this test. PCMark's temperature monitoring in their graph doesn't seem to have worked on the ZenFone 2. While Canada can get pretty cold, it's not currently that cold.

While our web browsing test is mostly display-bound, and PCMark is a more balanced workload, the next two battery tests tend to be SoC-bound. These tests tend to reveal which OEMs handle thermal throttling more gracefully than others. The first test is GFXBench 3.0's battery test, which puts a strong stress on a device's GPU, similar to playing a visually intensive 3D game. 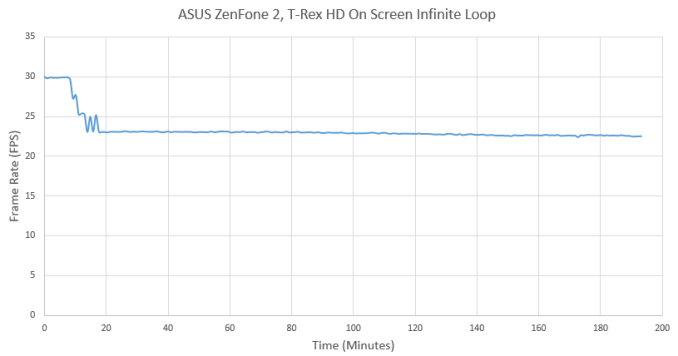 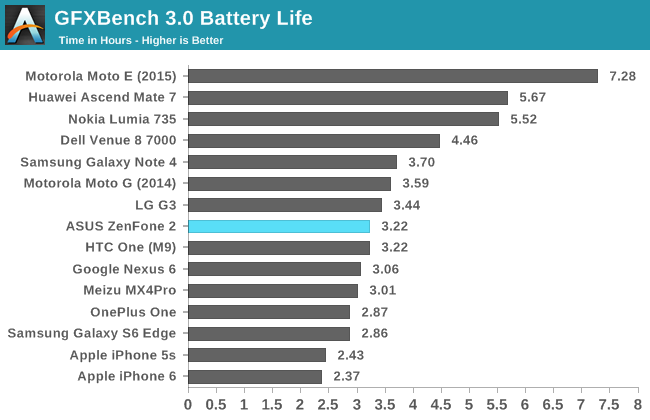 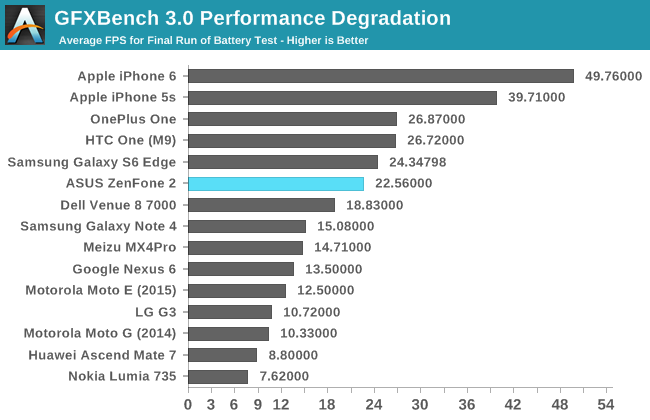 There are two sides of the story with the GFXBench battery test. While it's good to achieve a long battery life, it's not very useful if your frame rate during the test would have made for an unplayable game in the situation where the user is actually playing a game instead of running a benchmark. Devices like the iPhone 6 don't last as long as other devices, but show essentially no GPU throttling and retain a high frame rate even by the last run of the test.

In the case of the ZenFone 2, we see that it lasts exactly as long as the HTC One (M9). Last run GPU performance is noticeably slower though. Overall I would say the ZenFone 2's performance in this test is fairly good. Its battery life is in range of devices like the LG G3 and the Nexus 6, but it has higher sustained performance than either of them. ASUS and Intel also handle thermal throttling very well, with the frame rate dropping down from around 30 to 22 over the course of the first 20 minutes, and remaining there for the remaining two hours of the test. 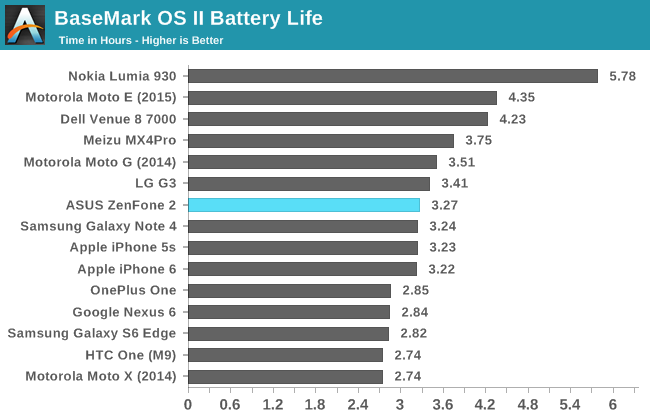 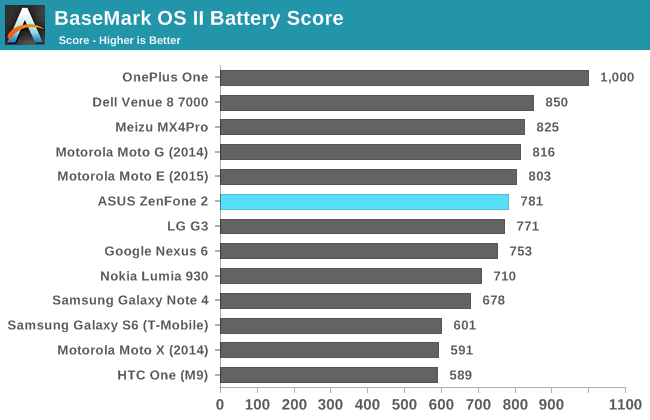 Our final test is BaseMark OS II's battery life test. This test puts a sustained load on the CPU, and the battery score is calculated based on the average amount of battery percentage consumed for each minute the test runs, as well as the level of CPU usage during the duration of the test. In both results we see that the ZenFone 2 does well for a device with its speed. Both the battery life result and battery score result are very close to those of the LG G3.

Overall the battery situation on the ZenFone 2 is somewhat mixed. Web browsing is definitely the heaviest scenario for power usage due to the display, but the ZenFone 2 is able to last fairly long in more mixed workloads. The downside that isn't reflected in these results is that the ZenFone 2 is lowering its brightness during tests that have lower display APLs, which means that while it may last as long as a competing device, if you were actually doing those tasks yourself you would be dealing with a dimmer display than the competition. Ultimately I think ASUS's solution of display dimming is the best option they could have chosen, as the alternative is basically to just have short battery life in every circumstance.

Something that is becoming a common feature for modern smartphones is the ability to charge at a rate faster than the standard 5V 1A spec that devices and charging blocks used in the past. The most well known standards for achieving this are Qualcomm's Quick Charge and Quick Charge 2.0.specifications. Fast charging is essentially a trade off between battery longevity and charge times, and it really relies on the assumption that smartphones are replaced every two years which is less time than any user would notice possible adverse effects. This rapid replacement of devices is somewhat worrisome, but that's a topic for another time. 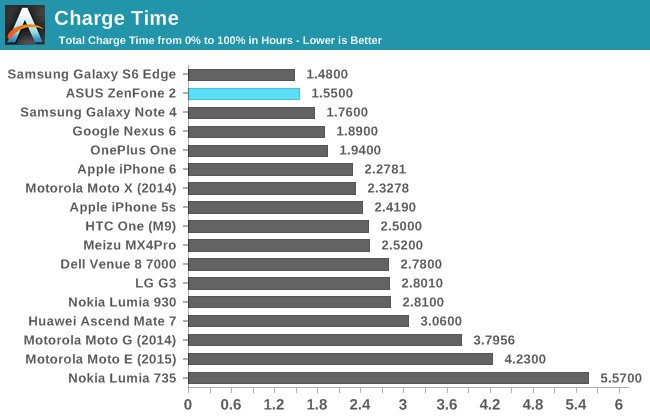 ASUS's 18W charger supplies power at 9 volts and 2 amps. This is the fastest charging block I have in my possession, and it charges the ZenFone 2 extremely quickly. While it's still beaten by the S6 Edge, the gap is very small, and the ZenFone 2's battery is around 27% larger. While battery life on the ZenFone 2 may not always be the best, buyers may find some comfort in knowing that when it does die they'll be able to get it up and running in a very short period of time.