Seeing the R300 made us forget about exactly what we were looking at - the only KT400 system at Computex that was running with DDR400 memory. The KT400 platform VIA was demonstrating was supposedly running at DDR400 without any issues which is more than any of VIA's motherboard manufacturers have been able to say; it is worth mentioning that it's almost always the case that the chipset manufacturer has no problems with running their own chipset but it's motherboard manufacturers that run into the vast majority of the problems. We're still hearing talk of an August launch for KT400 yet motherboard manufacturers aren't necessarily excited about the upcoming chipset. 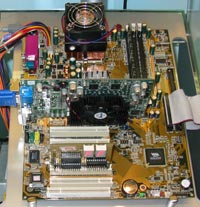 We had a chance to talk to VIA about their Pentium 4 strategy which, as we've outlined in our P4X333 Review, is truly limited by the legal matters surrounding their ability to manufacture and sell Pentium 4 chipsets. Coming down the road for Pentium 4 chipsets are the P4X400 which will add DDR400 support to the Pentium 4, as well as the P4X600 which will offer dual channel DDR support for the P4 as well. Because of availability issues VIA is considering bundling DDR400 memory with their P4X400 boards when they do end up shipping later this year.

VIA also had their K8HTA Hammer chipset up and running in their suite. The 800MHz/1MB L2 ClawHammer was definitely not running as hot as the processor will once it's clocked closer to its shipping clock speeds but it was apparently running reliably. 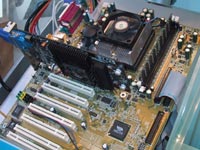 VIA's K8HTA reference board was seen in virtually every single motherboard manufacturer's booth or suite but this was the only one that was actually up and running. 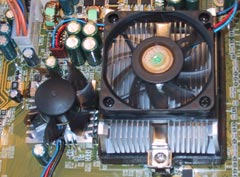 The AGP controller had an interesting heatsink/fan combo (right) and was running quite hot.