And as one more reason to test performance in this manner, the 7-zip source code is available under the GNU LGPL license. That allows us to recompile the source code on every machine with the -O2 optimization with gcc 4.8.2.

We added the 7-zip scores that we could find at the 7-zip benchmark page. But there is more. The numbers on the 7-zip bench page have no software details, so we could not be sure that they would be accurate. So we managed to get a brief session on a POWER8 "for development purposes" server. The hardware specs can be read below: 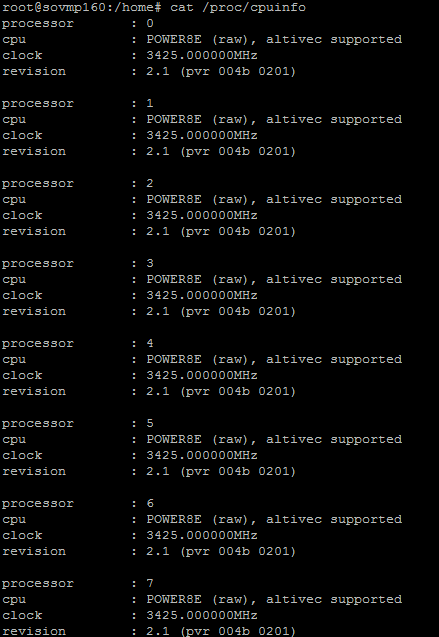 Yes, we only got access to 1 core (8 threads) and 2 GB of RAM. So real world server benchmarking was out of the question. Nevertheless, it's a start. To that end we tested with gcc 4.9.1 (supports POWER8) and recompiled our source with the "-O2 -mtune="power8" options on Ubuntu Linux 14.10 for POWER. 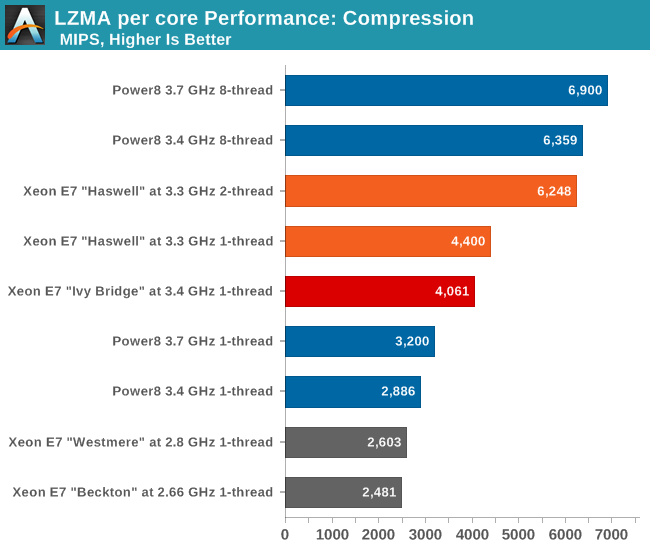 Let us first focus on the new Haswell core inside the Xeon E7, which offers a solid 10% improvement. Turbo boost brings the clockspeed of the Haswell core close enough to the Ivy Bridge core (3.3GHz vs 3.4GHz) and the improved core does the rest. Nevertheless, it is clear that we should not expect huge performance increases with a 10% faster core and 20% more cores.

Back to the more exciting stuff: the fight between Intel and IBM, between the Xeon "Haswell" and the POWER8 chip. The Haswell core is a lot more sophisticated: single threaded performance at 3.3 GHz (turbo) is no less than 50% higher than the POWER8 at 3.4 GHz. That means that the Haswell core is a lot more capable when it comes to extracting ILP out of that complex code.

However, when the IBM monster is allowed to use 8 simultaneous threads spread out over one core, something magical happens. Something that we have not seen in a long, long time: the Intel chip is no longer on top. When you use all the available threading resources in one core, the 3.4 GHz chip is a tiny bit (2%) faster than the best Intel Xeon at 3.3 GHz.