One of the most important aspects to any gaming notebook is the ability to keep all of the components at a reasonable temperature, as well as ensuring the notebook itself does not get too hot to touch. Although NVIDIA does not release official TDP specifications for their mobile GPUs, it is likely somewhere around 100 watts. Add in the Core i7 CPU, which has a TDP of 47 watts, and cooling becomes very important. There is no point in using such a powerful GPU if you cannot keep it cool, because it will just cut its clock speed to keep within a reasonable temperature. 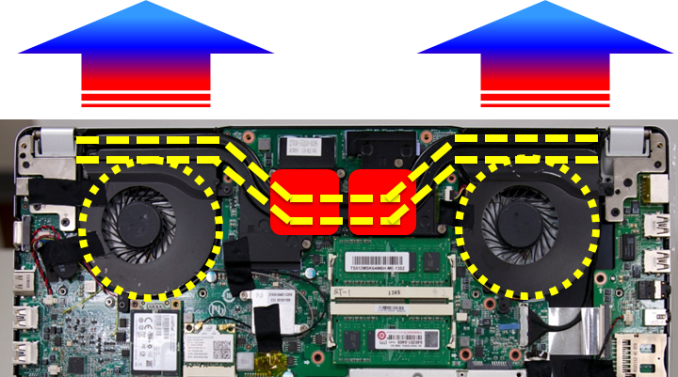 Gigabyte has two heat pipes, and two cooling fans. Air is sucked in the front of the laptop and exhausted out the back. This is fairly standard in this space, so let’s take a look at how it performs in the P35X. 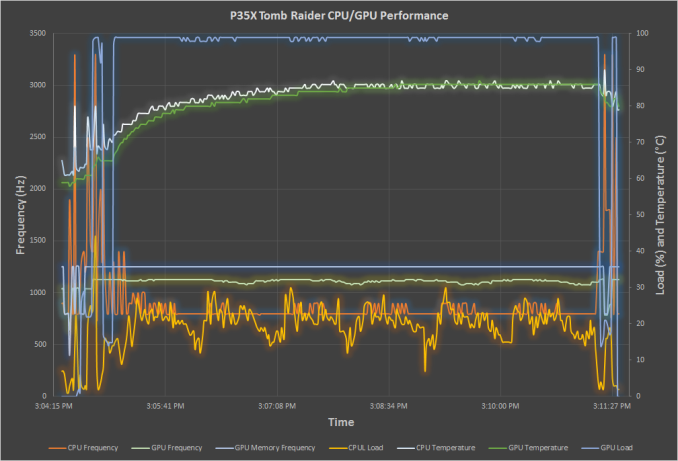 Since the heat pipes cover both the CPU and GPU, temperatures of both seem to rise in sync with each other. The CPU workload is not too hard in this benchmark, which is Tomb Raider being run at 2880x1620 and all options enabled. The light green line represents the GPU frequency. GM204 in a GTX980M has 1536 CUDA cores, and the base frequency is 1038 MHz, but it can boost beyond that if it has thermal room. In this benchmark, it actually spends the majority of its time at 1126 MHz. Temperatures stabilize on the GPU at around 86°C. The CPU is generally around the same temperature, usually within a degree or two. I was able to run this a few times, with one being for several hours, and the cooling system kept up admirably. For the graph, I chose a shorter run otherwise the data points get a bit messy.

The cooling system also does a fantastic job of keeping the overall chassis temperature quite low. That, coupled with the large amount of distance between the high power components and the trackpad means that even at full load the outside of the device hardly gets warm. Right over the power button is the hot spot, with outside temperatures hitting as high as 48°C there, but the majority of the laptop stays very close to ambient, and the trackpad basically does not even get warm. The WASD keys are well cooled, which is important since most games rely heavily on those for directional control. The amount of air moving through the laptop is fairly impressive.

So, yes the P35X can keep the system cool despite the high power components inside. However the big tradeoff with cooling performance is often noise, and the P35X is certainly loud.

I suppose it should be of no surprise that the P35X is a loud laptop, considering the cooling system needed to keep temperatures in check, but it really is quite loud. At full fan speed, I measured 57 dB(A) one inch over the trackpad. This is very loud, and if you were gaming on this system, closed earphones would be the minimum I would recommend, and honestly noise cancelling headphones may be the best solution.

I think my biggest disappointment with the P35X is just how loud it is, and unfortunately I do not mean when gaming. I do not think there is any getting around the noise when gaming, due to the size of the system, but that massive cooling system which can actually keep the laptop cool should be able to have no issue at all when just working on the desktop. The fans in the P35X run 100% of the time, even if the system is just idling at the desktop. Normally this is not a huge issue, since they run fairly quietly, with a SPL of around 40 dB(A) measured at the same one inch from the trackpad, but even light tasks or random Windows scheduled tasks can cause the fan speeds to ramp up to quite loud levels; 45 dB(A) or more can occur just moving through Explorer, or surfing the web.

Gigabyte does offer a bit of control over this, but even in the quietest mode it is a bit too loud for my comfort. If the sound of fans does not bother you, perhaps this will not be a big issue, but I have spent a lot of time with fanless devices lately, and quiet computing has always been something that I have strived for even on my desktop. Controlling the fan speed can be done within the Gigabyte smart manager software.

Gigabyte includes a couple of custom software utilities, and while much of this is something I would normally uninstall from any new machine, some of the utilities are quite functional, and almost necessary. The first is the aforementioned smart manager software, which controls a lot of the core laptop settings in a single interface. 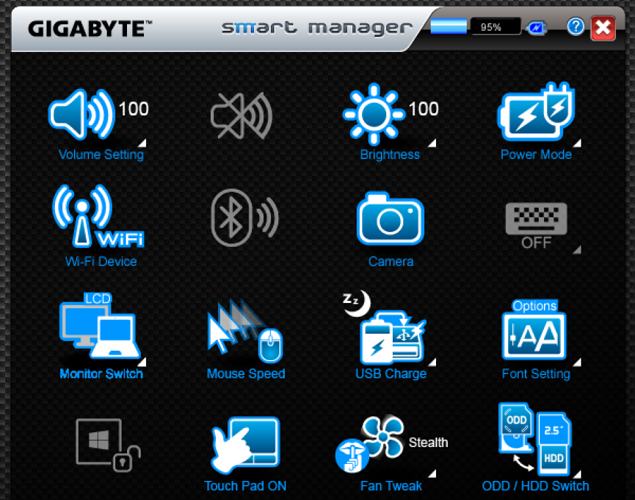 Some of the features are somewhat redundant with built-in Windows settings, but if you do not like digging around in the control panel, or modern Settings panes, the smart manager software can make it easy to enable or disable Bluetooth or Wi-Fi as an example. It also has settings for DPI scaling and power settings. But the more custom aspects are things like enabling or disabling the trackpad, changing the USB sleep charging settings, and setting whether the front tray has a DVD drive or hard drive installed. But likely the most important settings for gaming are being able to disable the Windows key to avoid accidentally exiting a game, and being able to adjust the fan speeds for various scenarios.

You can choose one of four settings for the fan speed, and honestly other manufacturers should add something similar to all gaming laptops. Stealth is the lowest setting, and would be the one I would use in any scenario other than gaming. Auto High is claimed to offer 95% of the cooling of the Max Fan option, and I tried gaming for several hours on Auto High and I would agree. This mode does allow the fans to run at maximum. For situations that warrant it, end users can enable the fans at maximum cooling as well, and although the when the fans are spun up the system is very loud, cooling is quite impressive. Being able to set the fan at maximum is a setting every gaming system needs to incorporate. Sometimes it is better to put these decisions into the hands of the end user, since they know when they need it.

One other piece of software that Gigabyte has added to the P35X is their LAN Optimizer software, which is based on Realtek software. This is standard Quality of Service (QoS) type network software, which allows you to prioritize network traffic based on certain criteria. Many home routers offer QoS, but configuring it means logging into the router, and perhaps you do not want it enabled all the time. The LAN Optimizer software has several very easy settings to allow you to prioritize gaming traffic, browsing, or video streaming. This would let you download a new game on Steam while still streaming Netflix, and the Netflix traffic would get priority. Any extra bandwidth would go to the Steam client. The software also has more advanced settings if the defaults will not do what you want. 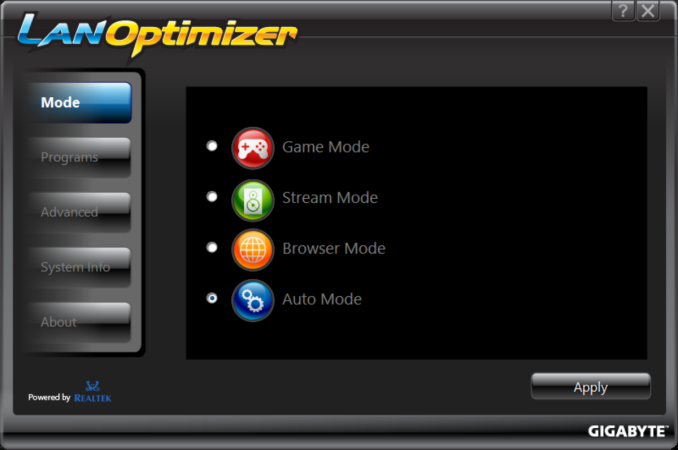 I like the idea of this software, but it would certainly have its limitations based on the use scenario. In my house, there are quite a few devices on the network at any one time, and any of them could be doing heavy bandwidth activities, so for a house like mine, really the only option is to use QoS in the router. If your LAN consists of just a couple of devices though, this could really help out.

The P35X has two 1.5 watt speakers located above the keyboard, and it also has a woofer underneath. In theory this should give it much better low end, and we will check that out in a moment. On the software side, Gigabyte has included Dolby Digital Plus Home Theater software. This offers up several pre-configured equalizer modes, as well as some more interesting features like a Volume Leveler, a Surround Virtualizer, and a Dialogue Enhancer. 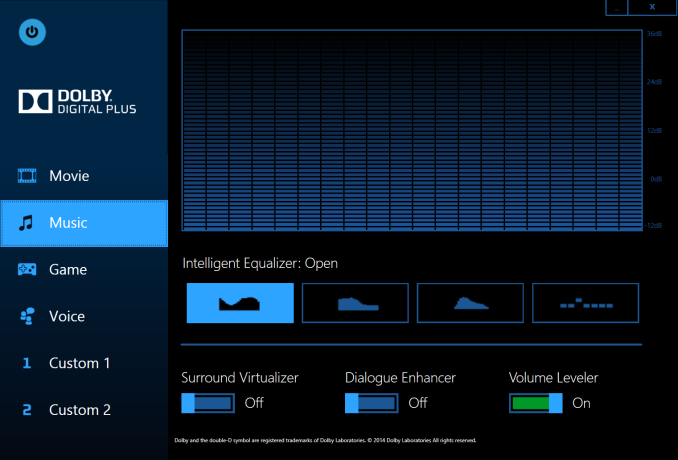 There is also the ability to set two custom presets to allow the device to work in a way which suits you best. Not all of these settings may benefit you, but some of them could come in handy depending on the material being watched. 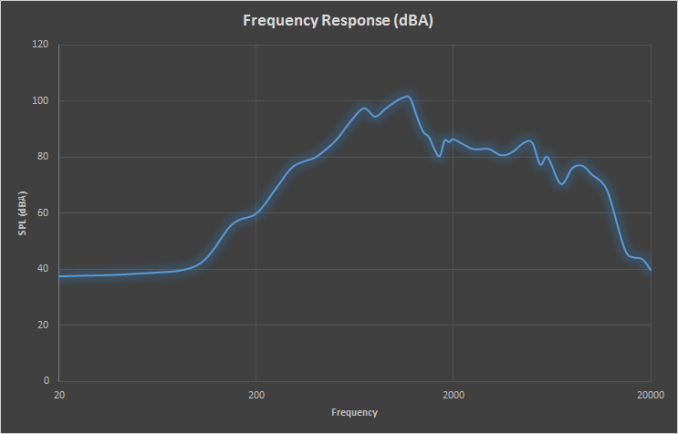 The low end on the P35X is helped out by the woofer on the bottom, and it spikes the response curve up to around 1000 Hz, where the volume is over 100 dB(A) and almost painful. Other than the spike around 1000 Hz though, overall frequency response is fairly flat which is a good thing. Listening to music, I was able to hit 87 dB(A) which is a great result. For a laptop, the speakers are pretty good on this device.