Another major area of focus for Samsung for the S6 was refining the camera. Both share the same Sony IMX240 camera sensor, which seems to be quite similar in spec compared to the Samsung ISOCELL sensor that was used in the Galaxy S5. As far as I can tell, the two sensors are mostly similar, but the IMX240 seems to have better high-ISO performance when comparing the GS5 and GS5 LTE-A.

Meanwhile Samsung has improved the optics to have a maximum aperture size of f/1.9 compared to the f/2.2 that we saw with the Galaxy S5 as well as the addition of an IR sensor in order to improve white balance detection. OIS is also introduced to the Galaxy S lineup for this generation, and in practice the stabilization is as effective as the Galaxy Note 4.

Samsung also strongly prioritized shooting speed and general camera speed with this generation, as they introduced object tracking AF, a double tap camera gesture, and further refinement of the PDAF system in order to make the camera experience much better than before. The object tracking AF is similar to what we've seen on phones like the Huawei Ascend Mate 7 before, but double-tapping the home button to wake up the camera was almost instant compared to pretty much any other method I've seen before. The long start-up time that I saw with the Galaxy S5's camera application has also disappeared for the most part, and in general places like the gallery and camera application are much faster than before.

In the interest of readability, the spec table below should help to provide some perspective on the changes that have occurred from the Galaxy S5 to the Galaxy S6. I won't discuss the front-facing camera outside of the spec table, other than to say that the minimum shutter speed is far too low for a camera that solely relies on EIS at 1/7 seconds.

As shown in the table above, the sensor is mostly similar when comparing the Galaxy S5 to the Galaxy S6 which also means that the somewhat annoying 16:9 aspect ratio is retained, but there are some major changes in everything else around the CMOS image sensor. The optics stack clearly has had a dramatic change as the focal length goes from 4.8mm to 4.3mm. Converting this to 35mm equivalent focal lengths, this means that the effective focal length goes from 31mm on the Galaxy S5 to 28mm on the S6, which ends up increasing field of view by a fair bit.

It’s likely that this was necessary to keep the camera hump from becoming ridiculous in size as it already protrudes around 1-2mm from the back cover of the phone. Some may not have any problem with this change as this means the person using the Galaxy S6 won’t have to stand as far away from a subject as with the Galaxy S5, but this wider field of view does have a cost. Fundamentally, if the optical system is already limited by the resolution of the image sensor then increasing the field of view decreases the effective resolution of the camera, as the same number of pixels has to cover a wider field of view. The other issue is that distortions worsen the further away from the center of the FOV, which means that the increase in field of view is also more distorted than before if not properly compensated for in the design of the optics.

Outside of this change in focal length, the move from an f/2.2 to f/1.9 aperture can also carry some risk as widening the aperture of an optical stack also increases aberration if not properly compensated for. However, this does improve the amount of light collected, which means that it’s possible to take a photo without setting ISO as high and/or shutter speed as low as it would be with a smaller aperture size. This helps to compensate for the relative lack of light sensitivity that comes with a 1.1 micron pixel size.

The final difference is the addition of OIS, which helps to compensate for the effects of hand-shake. A good OIS system can make a massive difference in low light, as the effects of hand shake limit most smartphone cameras to about 1/15 seconds in low light without OIS. With good OIS, it’s possible to push shutter speeds as long as a third or half a second, which represents a 5-7x increase in total light collected. However, OIS is only effective at doing this if the scene doesn’t contain enough movement to cause motion blur regardless of hand shake. Ultimately, to capture good photos of things that often won’t stay still there’s still a need to have good light sensitivity in the camera without relying on long shutter speeds.

Of course, theoretical discussions of all of this doesn’t really help much if the camera doesn’t perform well in practice. However, before we get to testing image quality I wanted to discuss the experience of using the Galaxy S6 as a camera, because this is often an area that can make or break a camera even if the pictures it takes are quite good. There are a lot of elements that go into making a good camera user experience, which starts with a good control layout in the camera application, a quick and easy method of launching the camera, high frame rate and resolution preview, and low focus/shot to shot latency. If there’s anything wrong with these elements of the experience, the amount of frustration involved in getting a good photo rises pretty quickly in my experience. It also becomes difficult to take a good photo as more time is spent fighting the camera. 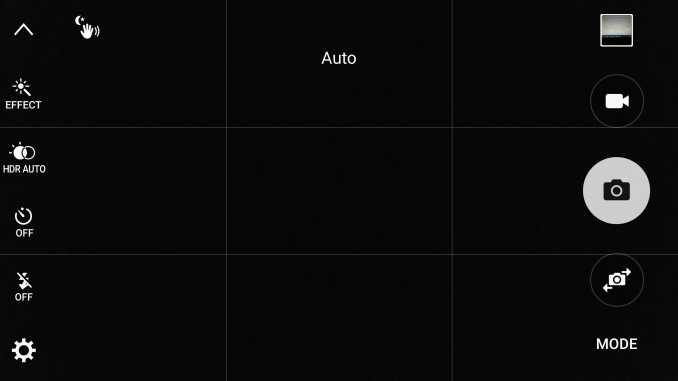 In the case of the Galaxy S6, the camera UI itself is largely similar to the Galaxy S5 at a high level. Out of the box, the auto mode UI deletes things like metering settings, ISO settings, and a whole host of other settings that ultimately made things more confusing than helpful. The quick controls that are available include the flash settings, timer settings, HDR settings, and filters. Other than this, Samsung includes the mode, front/rear camera toggle, shutter button, and video recording button. It also goes without saying that the UI includes quick access to the gallery. This auto mode is painless, and I never felt like I was missing necessary controls. It would be nice to have the settings menu not completely obscure the camera viewfinder, but I otherwise have nothing else to complain about here. 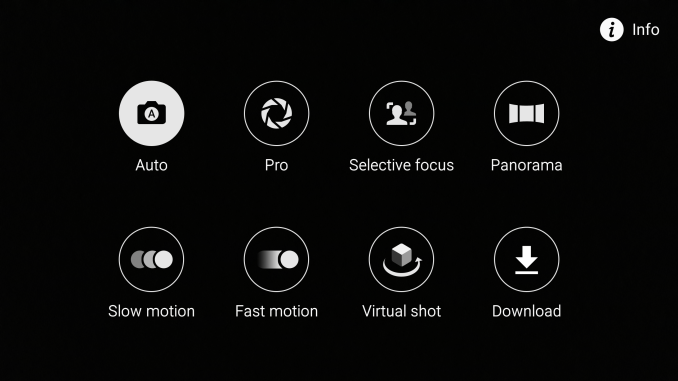 The mode that I do have a problem with is the Pro mode. Although it is nice to see that Samsung didn’t drop features like adjustable metering, the Pro mode is missing a lot of the things that actually justify the “Pro” label. There is the ability to change exposure compensation, ISO, white balance, focus, and metering, but this really isn’t enough to call this a “Pro” mode. The ISO settings are clearly limited to less than what the auto mode will use as the minimum ISO is 100 in manual mode while auto mode can go to 40 for less noise. Manual white balance is also almost unusable if auto fails as the presets don’t allow precise adjustment, which is concerning as both HTC and Apple provide this functionality either in third party applications or in the stock camera application.

There’s also no shutter speed control, so there’s no way to manually force long exposures if the phone is on a tripod or otherwise well-stabilized. To Samsung’s credit through, the manual focus feature is great for any case where auto focus fails. It would be nice to have an option to enable automatic 4-8x zoom when adjusting manual focus, but this is definitely a step up from the Galaxy S5 where the phone could fail to focus in low light and extreme macro shots.

Finally, the lack of any kind of detailed EXIF data in the standard gallery really drives this point home as it isn't possible to see ISO, exposure, or any other information without downloading a third party application. 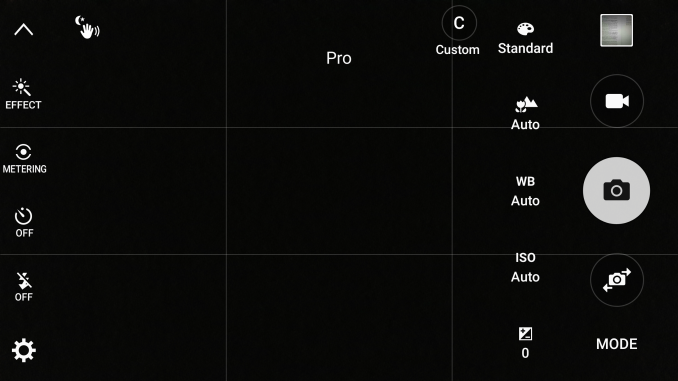 Overall, the camera UI is decent, but it’s disappointing that the Pro mode falls short. This is a minor detail for average consumers that will only use the camera on auto mode, but I suspect anyone that wants to control the camera more deeply will be left wanting a bit more if they’ve ever had access to proper manual camera controls on a phone.

Leaving the camera UI, auto-focus and capture latency is something that does matter to everyone. To test these two parameters, we focus on the ideal case of a high contrast target with strong lighting (our ISO chart) to try and make this the purest test of capture latency possible, and to get an idea for what the upper bound of focus latency is. Other cases can definitely produce different results, and low light will definitely have worse results but is much harder to control for. 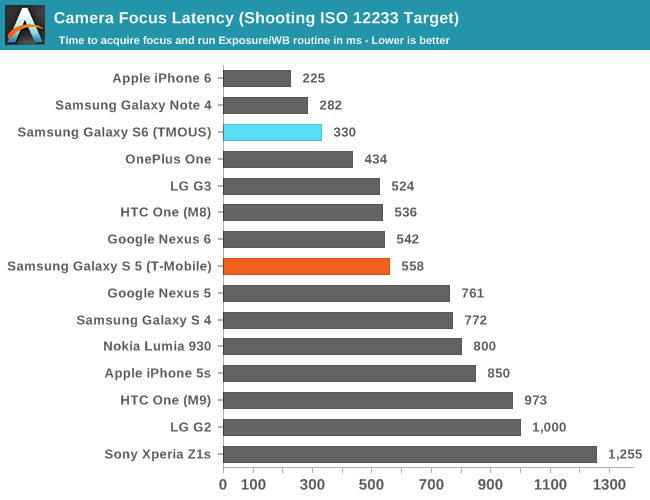 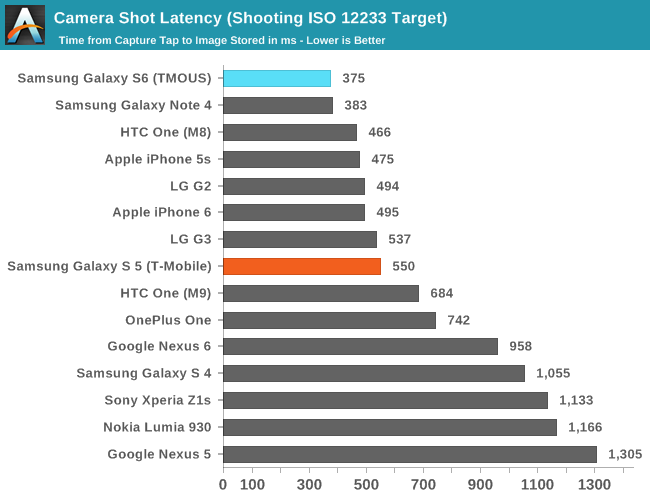 Tthe Galaxy S6 is incredibly quick here and is comparable to the Note 4 and iPhone 6. It seems that Samsung has tuned the auto-focus mechanism further here because it’s significantly faster than the Galaxy S5 in practice even though both have phase-detect auto focus/“focus pixels”. In low light, both the Galaxy S5 and Note 4 are incredibly slow in comparison to the Galaxy S6 when it comes to capture latency as the low light mode easily adds a quarter to half a second of shutter lag on the Note 4, and multiple seconds on the Galaxy S5. The launch speed of the camera application is also significantly faster than the Galaxy Note 4 or Galaxy S5, and the gallery application is definitely faster as well by a long shot which is now basically unusable on the Galaxy S5.

Overall, other than some small issues the user experience of the camera is solid and Samsung has managed to do a great job on improving the camera experience here. Compared to the HTC One M9, the Galaxy S6 has a much higher resolution preview with no visible frame rate issues and much better focus latency. The camera UI is decent, but doesn’t quite compare with the best available in the market. Now that we have a good idea of the user experience when using the camera, it’s time to get into image quality.