This generation more than any generation in recent memory has been a time of significant movement in the SoC space. We were aware of the Exynos 7420 well before it was announced in the Galaxy S6, but for the most part I expected to see Snapdragon 810 in at least a few variants of the Galaxy S6. It was a bit surprising to see Samsung drop Snapdragon SoCs completely this generation, and judging by the battery life of the Galaxy S6 it seems that Samsung had their reasons for doing this.

For those that are unfamiliar with the Exynos 7420, this SoC effectively represents the culmination of their efforts in semiconductor manufacturing and integrated circuit design. On the foundry side, Samsung is leveraging their vertical integration to make the first SoC on their 14nm LPE (Low Power Early) process, which seems to be solely for Systems LSI until they can no longer use all production capacity.

We previously mentioned that Samsung’s 14nm process in general will lack any significant die shrink due to almost unchanged metal interconnect pitch, but this assumption was in comparison to their 20nm LPM process from which the 14nm LPE process borrows its BEOL (back end of line) from. Opposite to what we thought, the Exynos 5433 was manufacturered on a 20LPE process which makes use of a quite larger metal layer. The result is that one can see a significant die shrink for the 7420 as it is, according to Chipworks, only 78mm² and a 44% reduction over the Exynos 5433's 113mm². This is considerable even when factoring in that the new SoC had two added GPU shader cores. Beyond the swap from a LPDDR3 memory controller to a LPDDR4 capable one, the only other at first noticeable major functional overhaul on the SoC seems to be that the dedicated HEVC decoder block has been removed and HEVC encoding and decoding capability has been merged into Samsung's MFC (Multi-Function Codec) media hardware acceleration block. 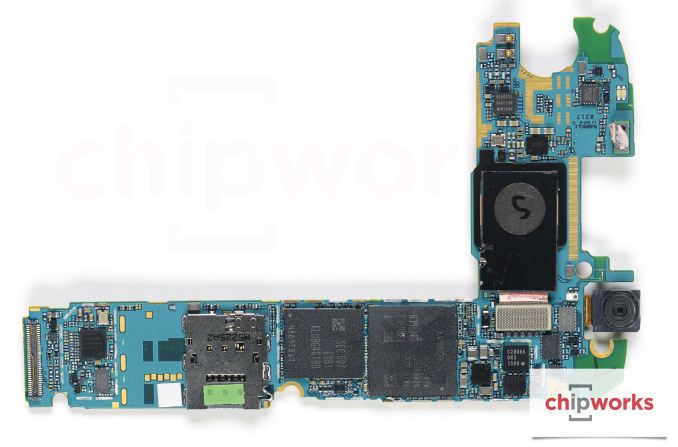 The move from a planar to FinFET process is crucial. Although this is covered in more detail in previous articles, the short explanation is that planar processes suffer from increasing power leakage at smaller process nodes as the bulk of the silicon becomes relatively more massive than the gate that controls the flow of current. This causes decreased power efficiency as the power source of the transistor starts to act as a gate itself. FinFET solves this problem by attempting to isolate the transistor from the bulk of the silicon wafer, wrapping the gate around the channel of the transistor to ensure that it retains strong control over the flow of current compared to a planar transistor design.

The effective voltage drop allowed by the process can be substantial. We can have a look at some voltage excerpts of common frequencies available on both the Exynos 5433 and 7420:

The ASV (Adaptive Scaling Voltage) numbers represent the different type of chip bins, a lower value representing a worse quality bin and a higher one a better quality one. Group 2 should be the lowest that is found in the wild, with group 15 representing the best possible bin and group 9 the median that should be found in most devices. As one can see in the table, we can achieve well up to -250mV voltage drop on some frequencies on the A57s and the GPU. As a reminder, power scales quadratically with voltage, so a drop from 1287.50mV to 1056.25mV as seen in the worst bin 1.9GHz A57 frequency should for example result in a considerable 33% drop in dynamic power. The Exynos 7420 uses this headroom to go slightly higher in clocks compared to the 5433 - but we expect the end power to still be quite lower than what we've seen on the Note 4.

On the design side, Systems LSI has also done a great deal to differentiate the Exynos 7420 from the 5433. Although the CPU architectures are shared, the A53 cluster is now clocked at 1.5 GHz instead of 1.3 GHz, and the A57 cluster at 2.1 GHz rather than 1.9 GHz. The memory controller is new and supports LPDDR4 running at 1555MHz. This means that the Galaxy S6 has almost double the theoretical memory bandwidth when compared to the Galaxy Note 4 Exynos variant, as we get a boost up to 24.88GB/s over the 5433's 13.20GB/s. We still need to test this to see how these claims translate to practical performance in a deep dive article in the future, as effective bandwidth and latency can often vary depending on vendor's memory settings and SoC's bus architecture.

Outside of the memory controller, LSI has also updated the 7420 to use a more powerful Mali T760MP8 GPU. Although the Exynos 5433 had a Mali T760 GPU as well, it had two fewer shader cores which means that achieving a given level of performance requires higher clock speeds and higher voltages to overcome circuit delay. This new GPU is clocked a bit higher as well, at 772 MHz compared to the 700 MHz of the GPU in the Exynos 5433. We see the same two-stage maximum frequency scaling mechanism as discovered in our Note 4 Exynos review, with less ALU biased loads being limited to 700MHz as opposed to the 5433's 600MHz. There's also a suspicion that Samsung was ready to go higher to compete with other vendors though, as we can see evidence of an 852 MHz clock state that is unused. Unfortunately deeply testing this SoC isn’t possible at this time as doing so would require disassembling the phone.