On the GPU side, the Core M-5Y10 has the Intel HD 5300 Gen8 graphics of Broadwell, but with clock speeds of 100 Mhz to 800 Mhz, as compared to the 5Y71 which has 300MHz to 900 MHz available. We have tested several Broadwell processors so far, and the Gen8 graphics are a reasonable boost over the Haswell Gen 7.5 model, with a bump in execution units (EU) from 20 on Haswell to 24 on Broadwell. The Yoga 3 Pro has the Core M 5Y71, which on paper should offer more performance than the 5Y10 based UX305 that we received for review.

One thing that became clear on the Yoga 3 Pro review was how even though the GPU was the same number of EUs as the Broadwell-U processors, and it has the same base and boost clock speed, the 4.5 watt window of Core M limited performance quite a bit. As we saw on the system performance already though, ASUS has elected to allow Core M to get hotter, so that may change the outcome on the GPU as well. 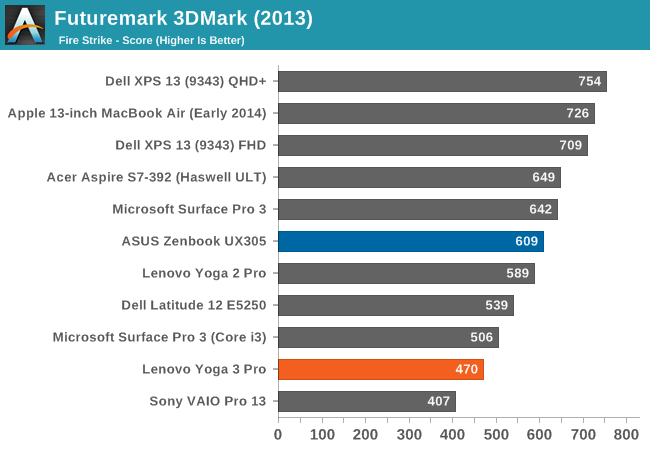 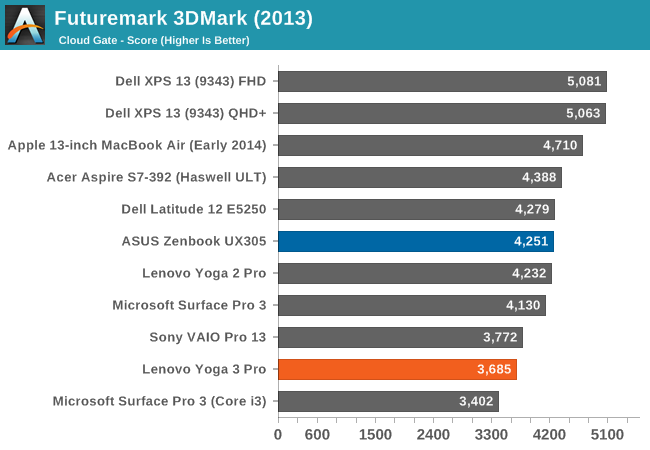 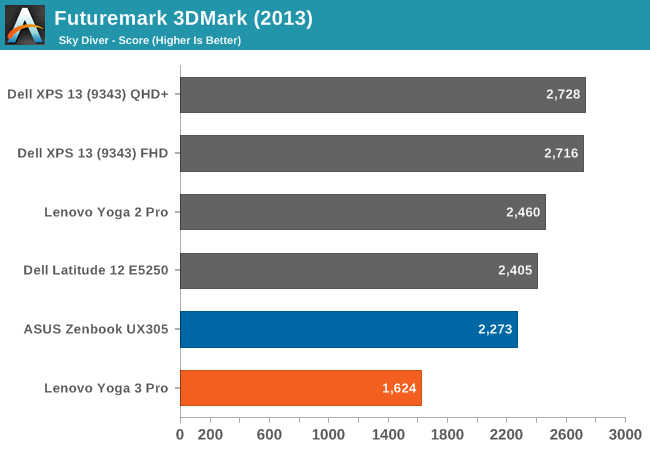 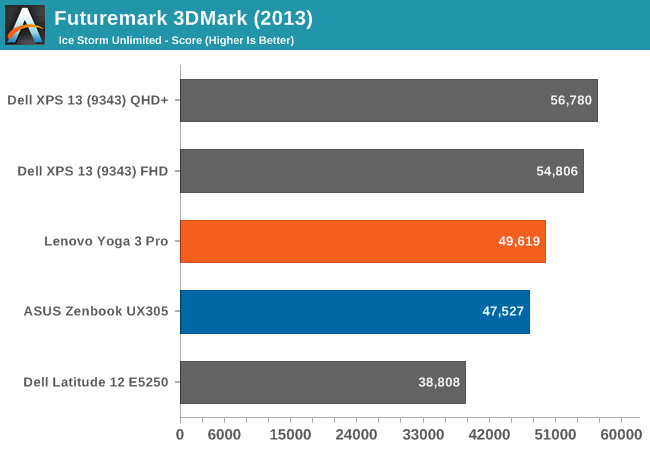 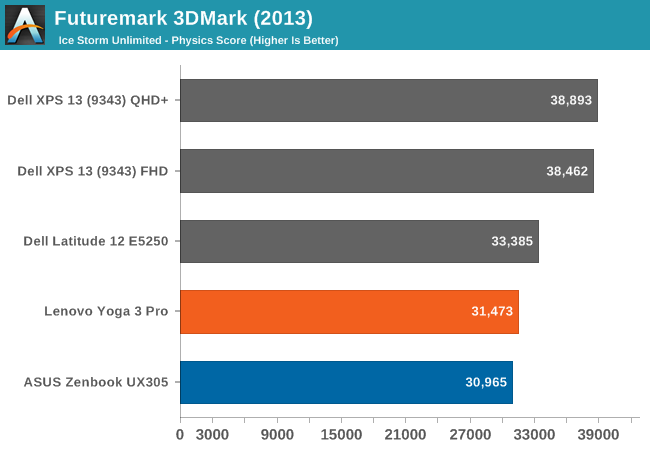 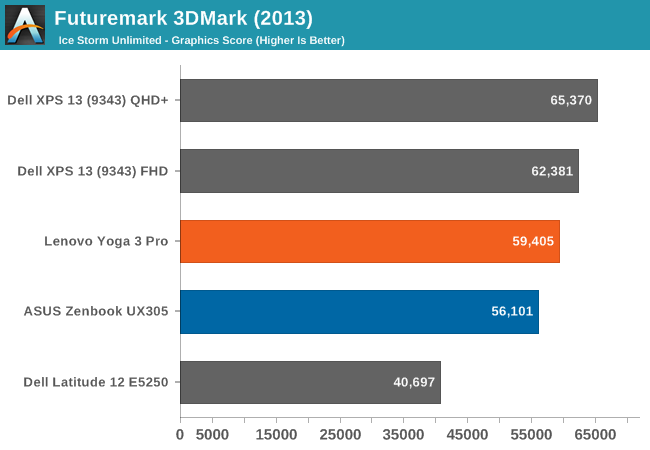 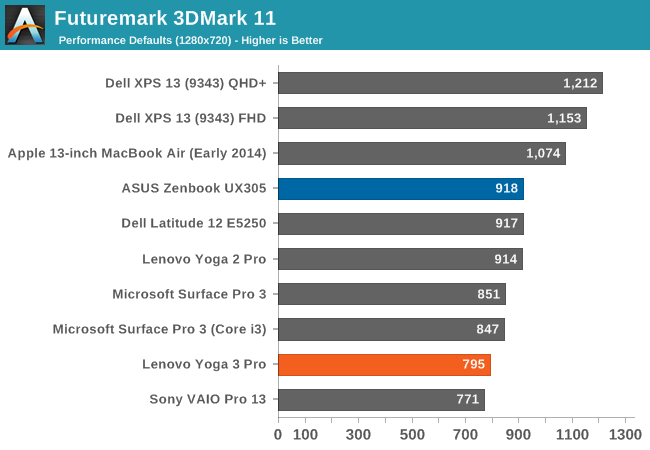 FutureMark has compiled several benchmarks in 3DMark 2013. All are a reasonable length, except for Ice Storm Unlimited which is more of a smartphone/tablet benchmark, and therefore completes very quickly on a PC. Here we can see how much more performance the ASUS UX305 can deliver over the Yoga 3 Pro, which again on paper has a faster processor. ASUS allows much more thermal headroom on the SoC, which results in considerably better scores when using the GPU. The exception to this is the Ice Storm Unlimited, which completes quick enough that the Yoga 3 Pro does not have to throttle as much. 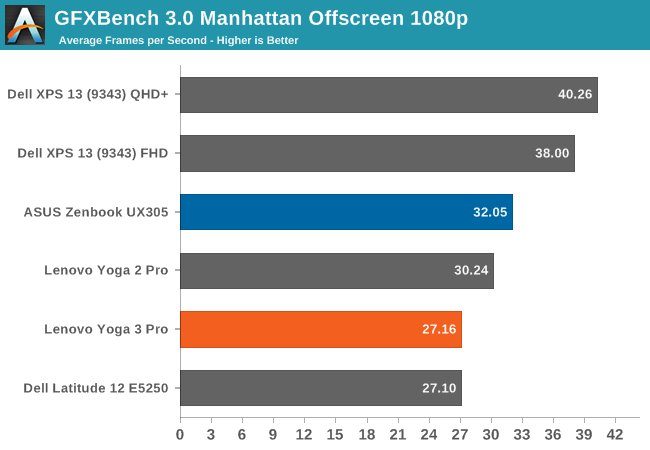 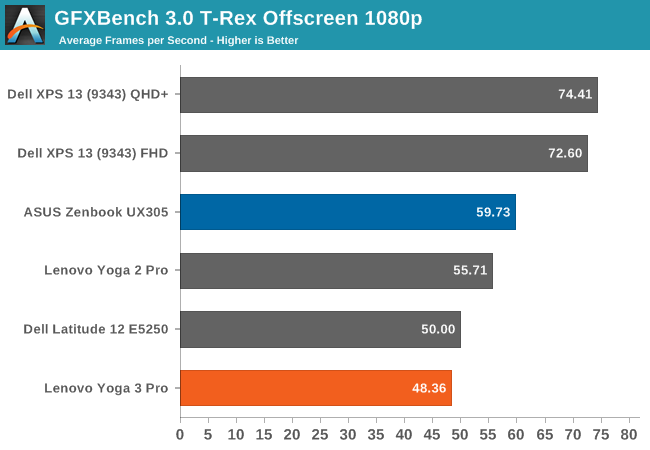 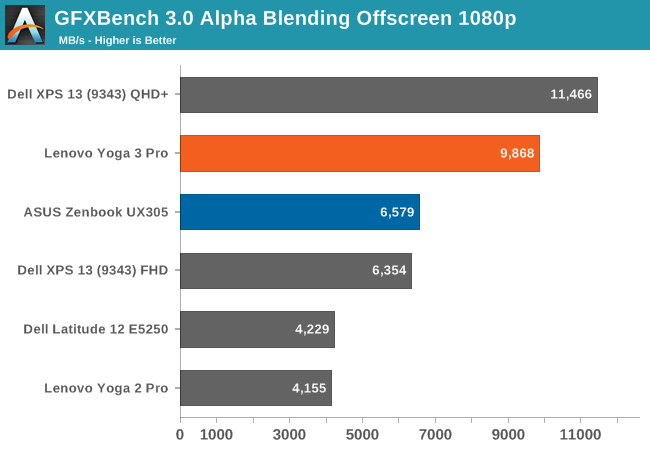 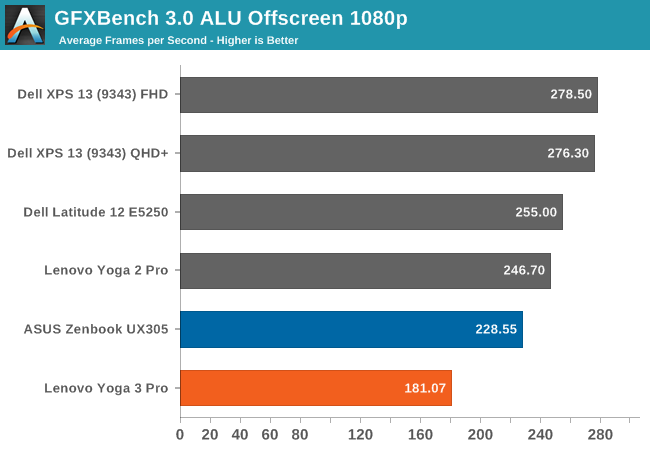 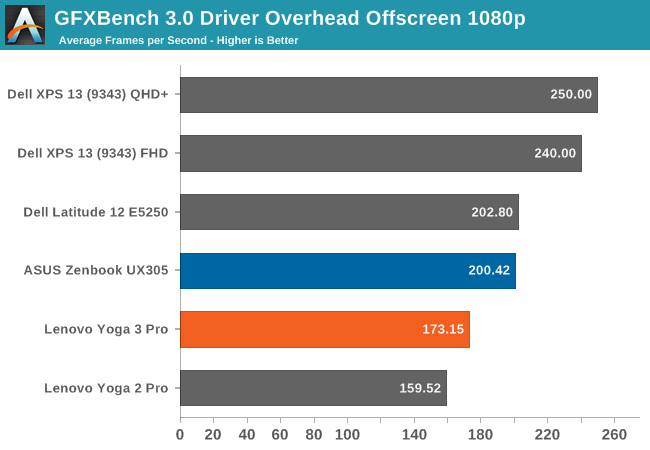 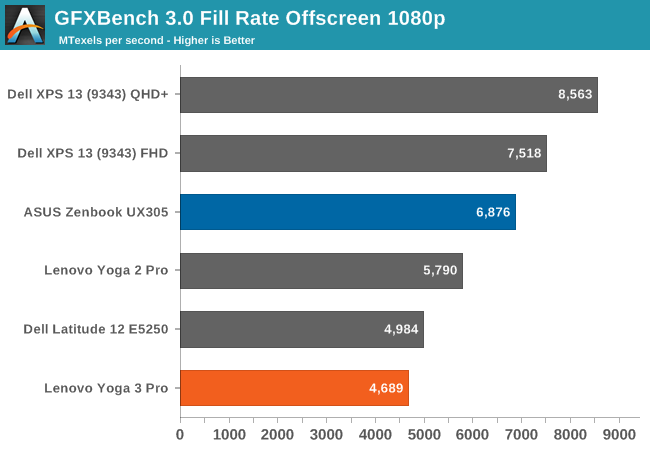 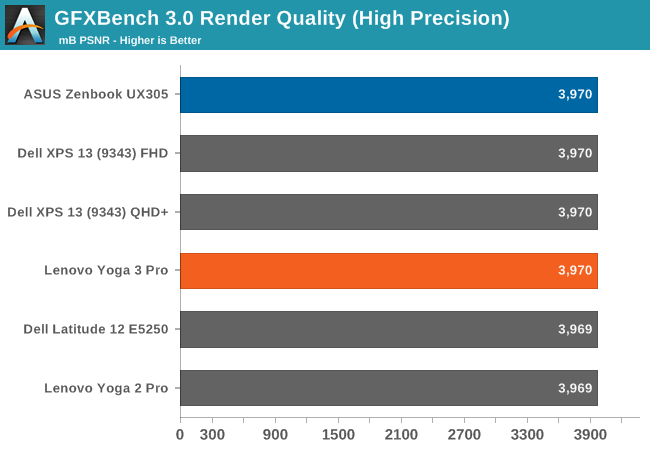 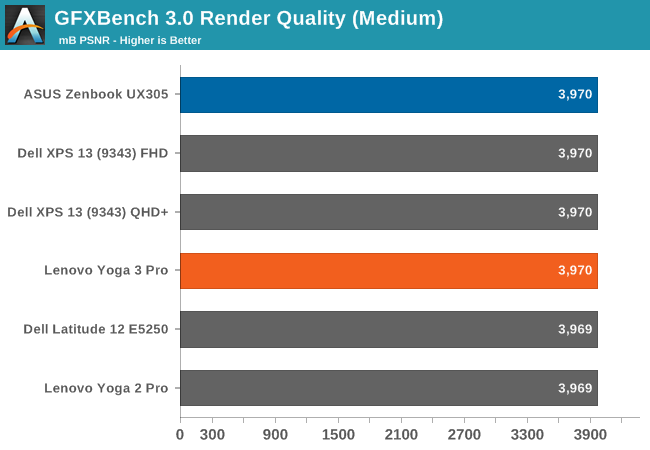 GFXBench 3.0 is available in the Windows Store, and is a DirectX version of GFXBench. On the two gaming benchmarks (Manhattan and T-Rex) we can see that the UX305 pulls ahead of both of the Haswell-U based devices in our graphs, which are the Yoga 2 Pro and the Latitude 12. The Dell XPS 13, with Broadwell-U, is still a lot more powerful which is not surprising since it has a 15 watt TDP compared to just 4.5 watts on Core M (Broadwell-Y). Once again, we can see that the ASUS is stronger than the Yoga 3 Pro. 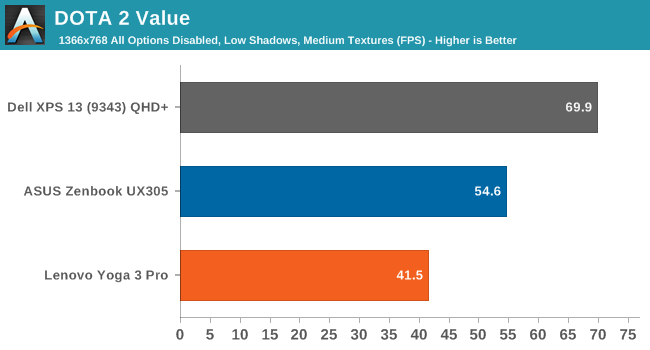 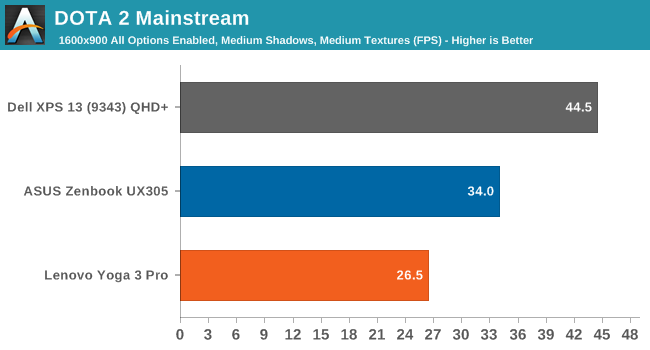 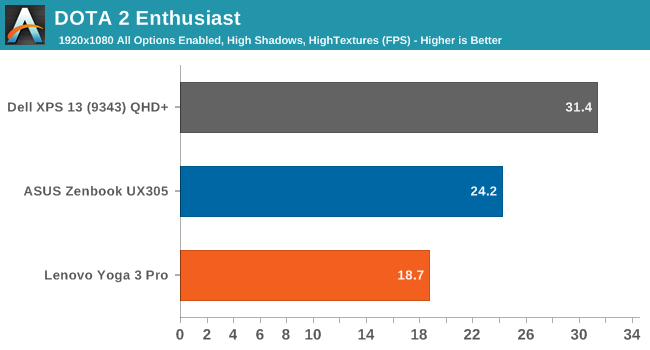 One area where the Yoga 3 Pro struggled was with our DOTA 2 benchmark, which is quite long in duration. We run at three different levels, and the Yoga 3 Pro fell quite far behind the Dell XPS 13. The ASUS UX305 closes that gap though, and gave a much higher frames per second than the Yoga 3 Pro.

As with the Yoga 3 Pro, we will compare the ASUS UX305 to several tablets to see where Core M fits in the lineup. The UX305 is certainly not a tablet competitor unlike the Yoga 3 Pro, but the improved GPU performance seen in the laptop comparisons should give us some more information to about where the Intel graphics compare to the best SoC GPUs available today. 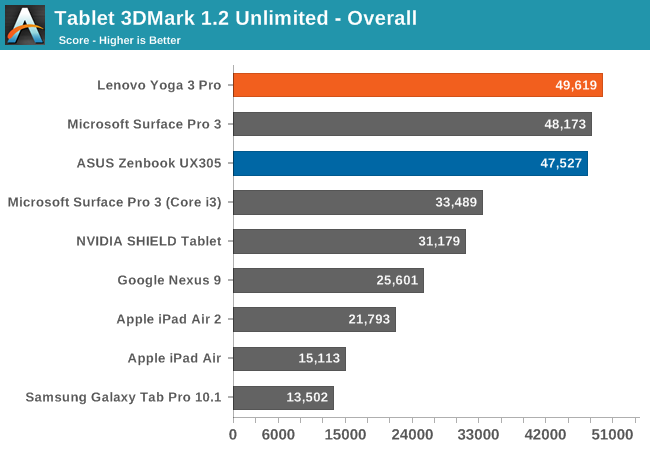 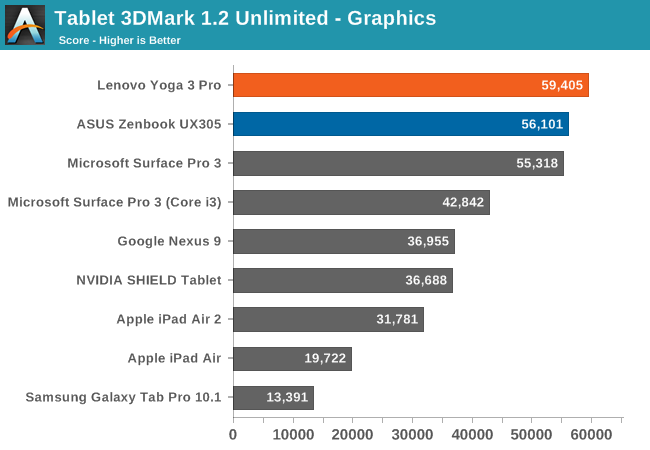 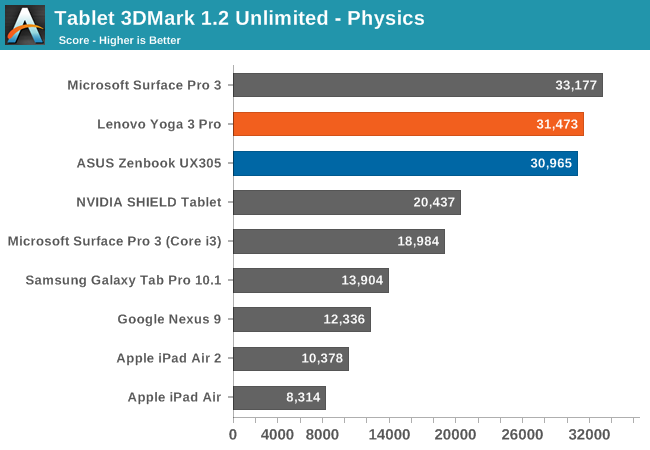 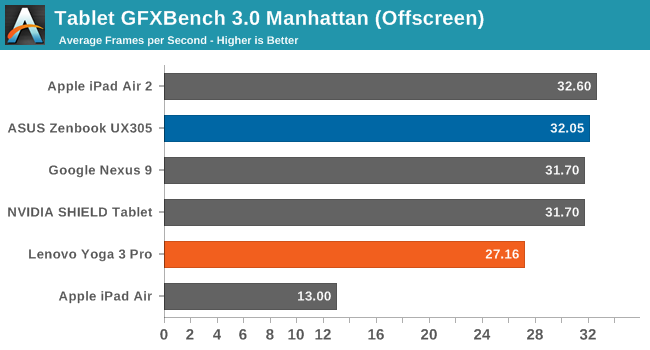 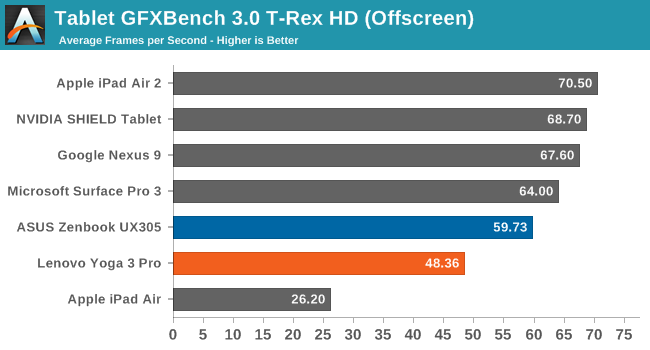 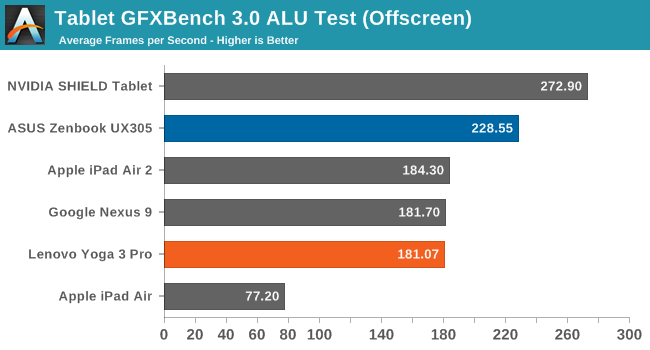 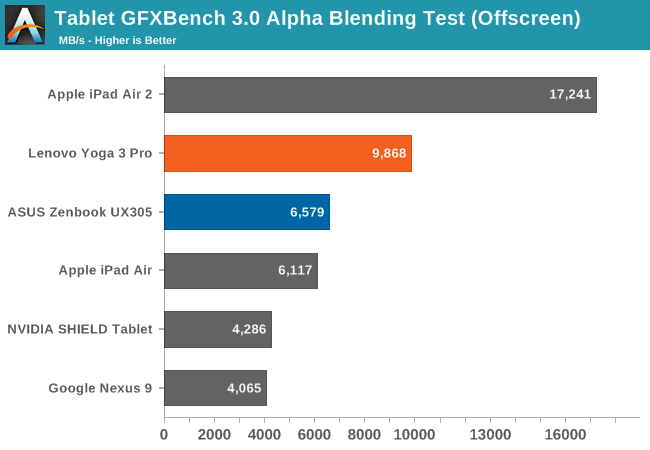 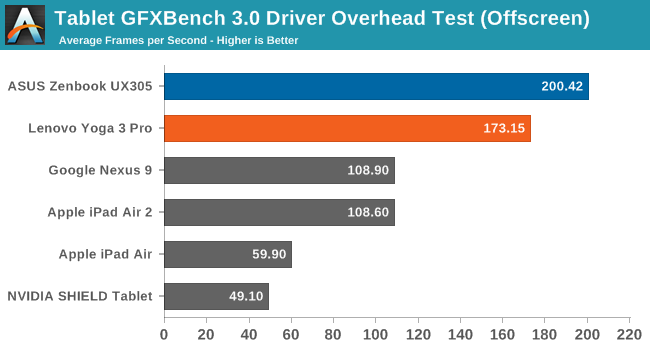 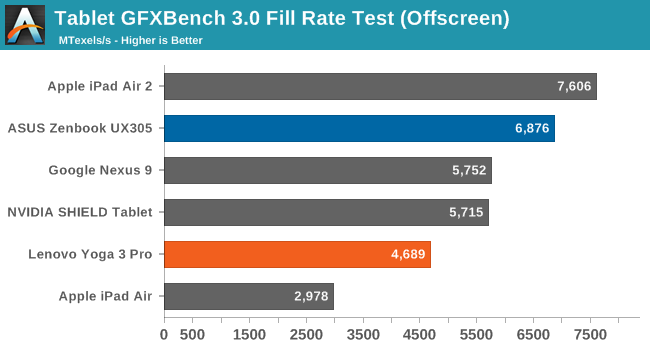 3DMark Unlimited shows the capabilities of the GPU, but is so short that the throttling issues we have observed do not come in to play. The Gen8 graphics of HD 5300 should certainly be able to compete favorably to any of the tablet SoCs if give enough headroom, however that is obviously not the case.

The GFXBench scores show that the Core M 5Y10 can compete with tablets, with it coming in very close to the same scores as all of the latest tablets on the Manhattan score. The T-Rex benchmark is much easier, and it falls behind a bit, but is still a lot quicker than the Yoga 3 Pro.

The increased thermal headroom that ASUS allows on the UX305 has dramatically increased the GPU performance of Core M when compared to the Yoga 3 Pro. The device does get warm though, with it hitting close to 50°C at the top of the laptop, but it does not affect the keyboard or wrist areas. The lack of a fan makes these scores even more surprising, but Lenovo has opted to keep the surface temperatures a lot lower on the Yoga 3 Pro. 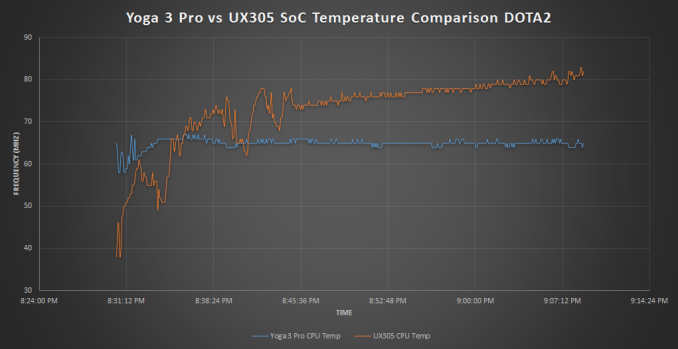 There is a lot to be said about Core M performance, and too much to put in this review. We will be doing a deeper dive into the performance of Core M and how it performs in various devices, both actively and passively cooled, as well as compared to Broadwell-U based systems which are a more traditional design. Clearly, there is a lot of factors that affect performance in a device such as this than just the label on the spec sheet.