ASUS has employed the Intel Core M processor in the design of the UX305, and unlike the first device we tested with Core M, ASUS has created the UX305 as a fanless design. This is likely easier to achieve when you consider that the UX305 is completely constructed out of aluminum. Aluminum is a great conductor of heat, and allows a big part of the laptop to be a cooling surface. The heat is also kept at the top of the keyboard deck, where it is less likely to be noticed when using the laptop. During most general use of the UX305, it does not get warm anyway, and only when used for extended periods of high use did I notice it get hot.

The UX305 will be offered with either the Core M-5Y10 or 5Y71 processors, although for North America the 5Y10 is the only available processor right now. It is a dual-core, quad-thread CPU with an 800 MHz base frequency, and 2 GHz boost frequency. This is a big step down from the 5Y71 which has a 1.2 GHz base and 2.9 GHz boost capability, so it will be interesting to see how the UX305 performs. I have highlighted the Lenovo Yoga 3 Pro since it is the only other Core M device we have tested, and it has the Core M-5Y71 processor onboard. 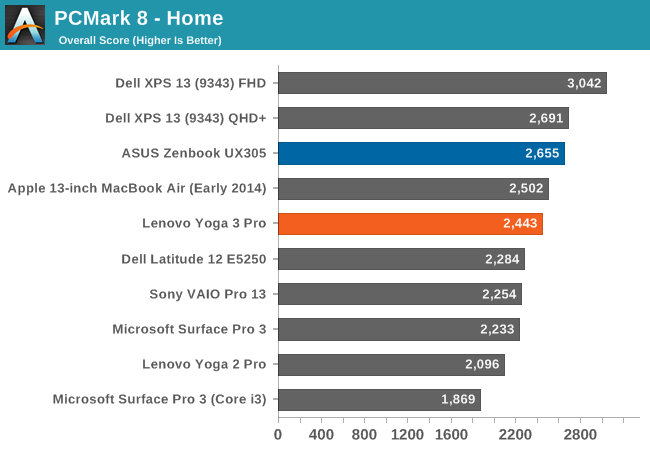 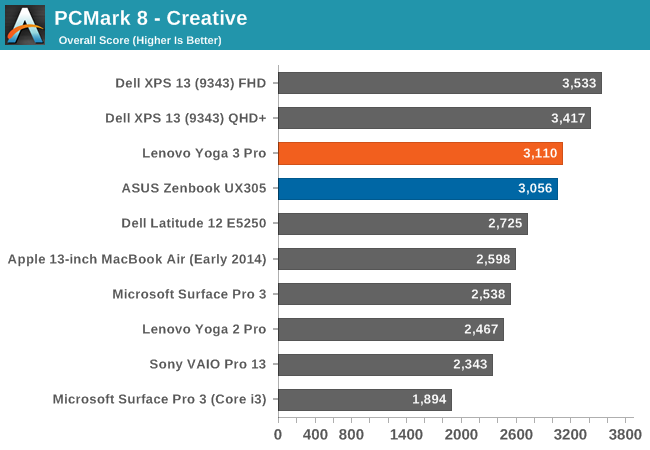 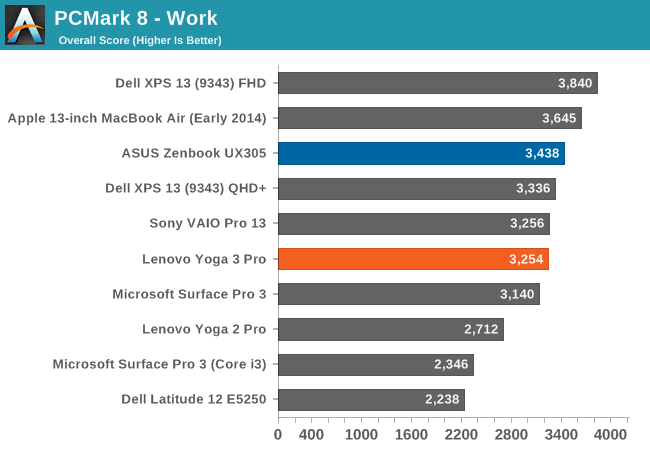 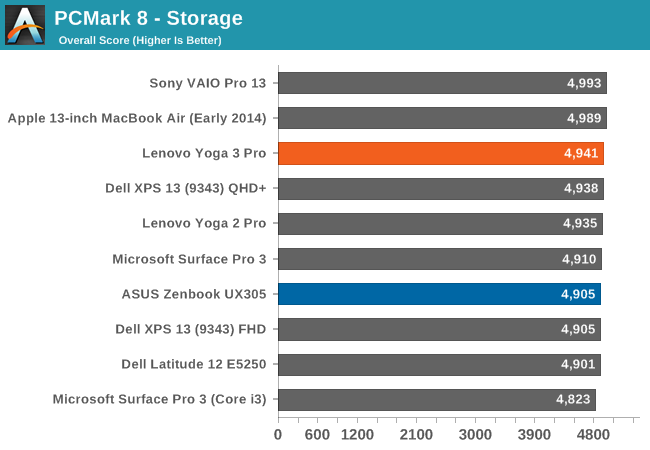 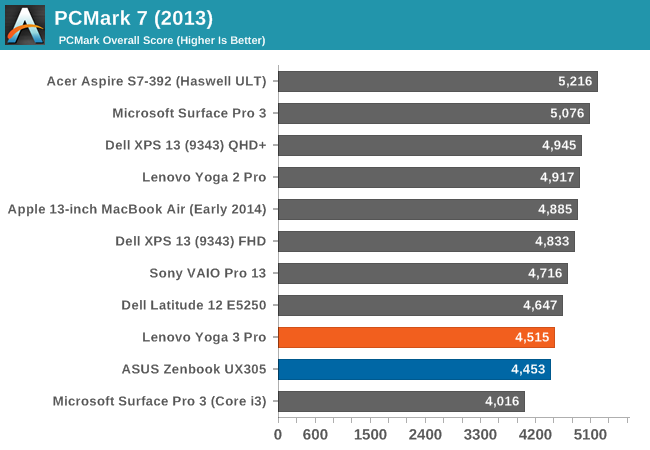 PCMark 8 performs four sets of tests, with different use case scenarios to get a feel for how the device will perform on several different sets of tasks. The UX305 performs quite well here, despite the Core M processor. You can see that it even outperforms the Yoga 3 Pro on several of the tests, and it has a faster version of the Core M CPU. We will dig into that more in a bit. 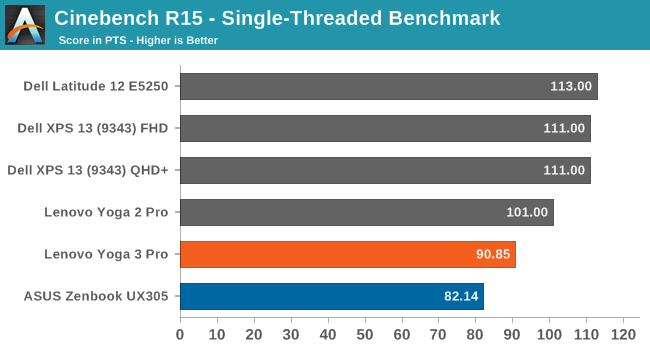 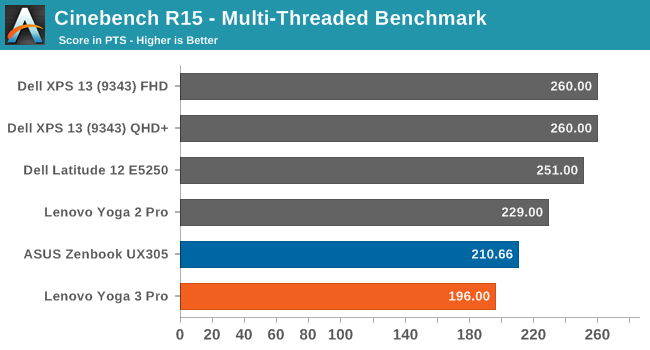 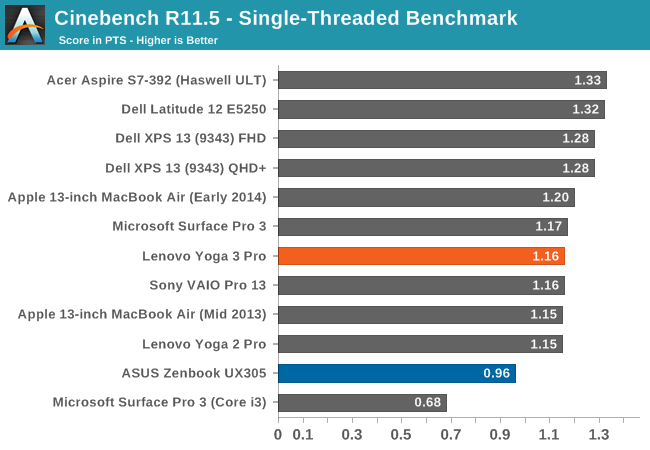 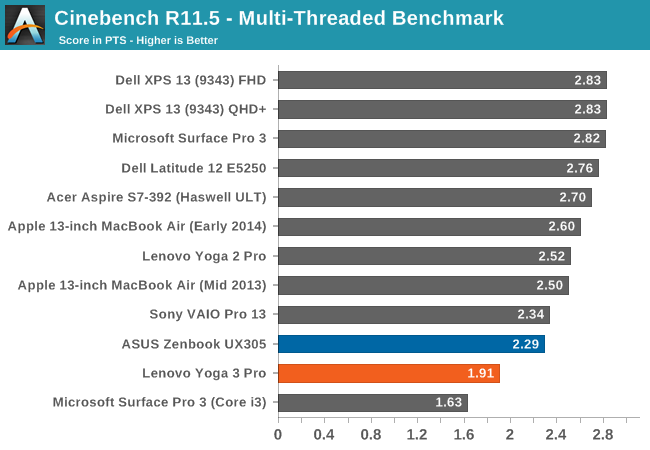 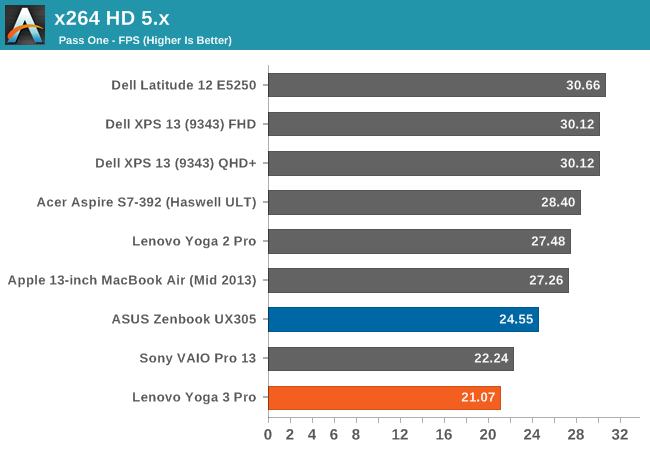 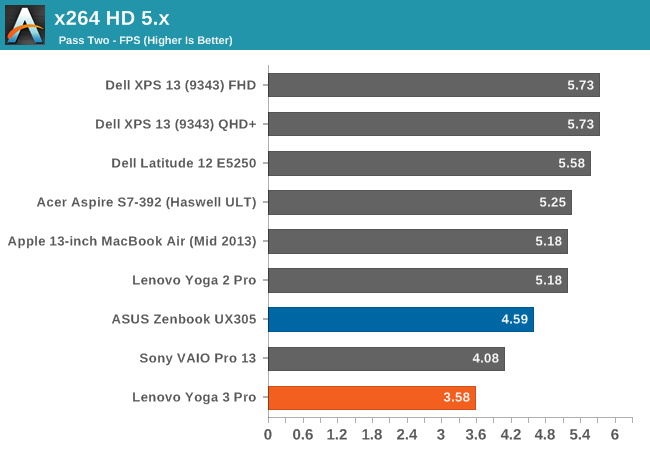 On the single-threaded runs of Cinebench, The UX305 is near the bottom of the pack. That is unsurprising, since it has a boost clock of just 2 GHz, and furthermore on a single-threaded runs most CPUs can usually perform very close to their boost clock for the duration. Consequently the extra 900 MHz on the Yoga 3 Pro's 5Y71 pulls a big lead here. It is interesting to note that the only Haswell-Y based processor that was in Bench was the Core i3 version of the Surface Pro 3. Broadwell-Y (Core M) handily outperforms it in both single and multi-threaded workloads. This has a lot to do with the Core i3 having no boost clocks at all.

Moving on to the Multi-threaded workloads, we can see that the UX305 is still near the bottom of the chart, but it has passed the Yoga 3 Pro with 5Y71. The same thing occurs on the x264 benchmark, which lasts several hours. We need to see a couple of more benchmarks to get an idea of what is going on. 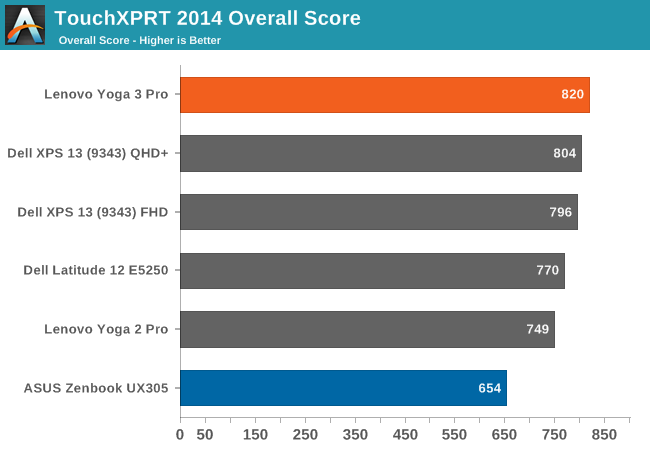 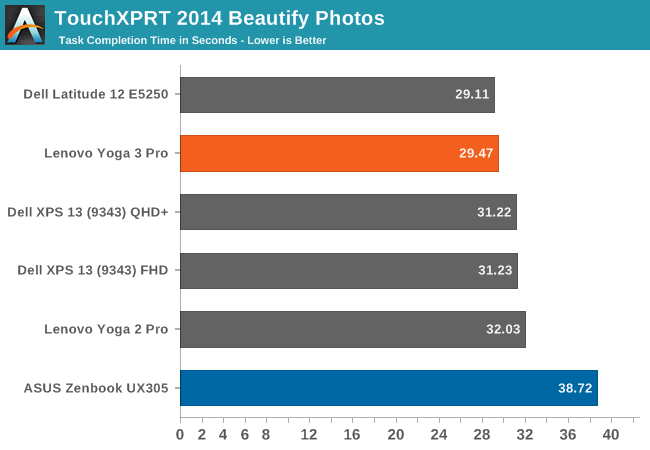 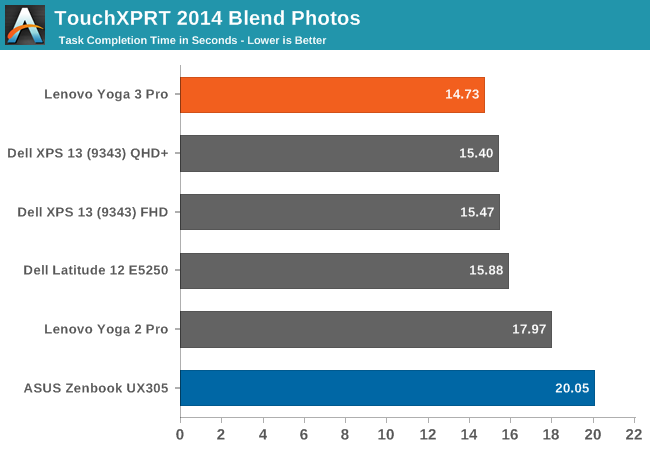 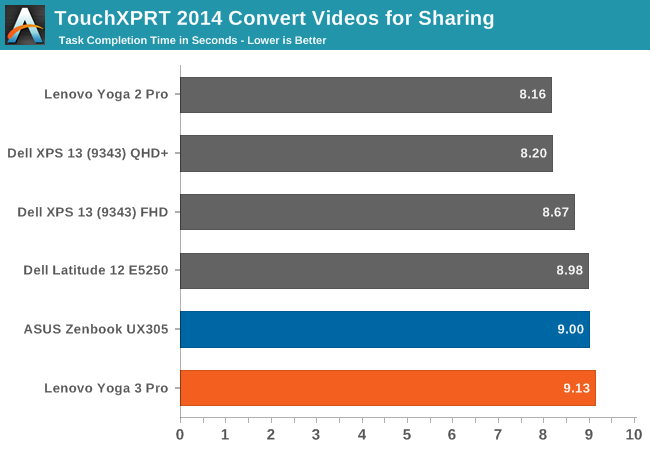 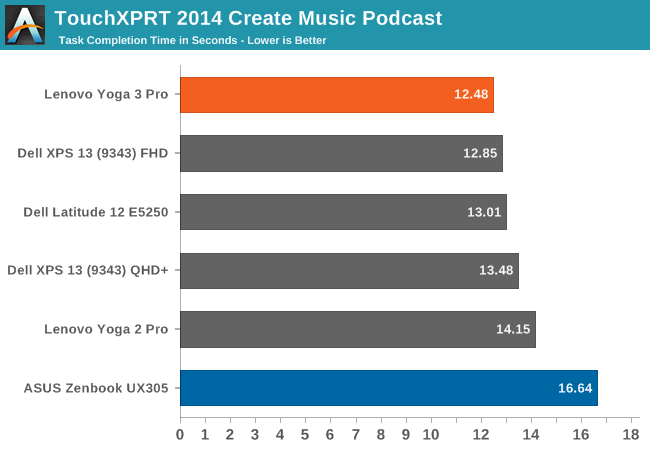 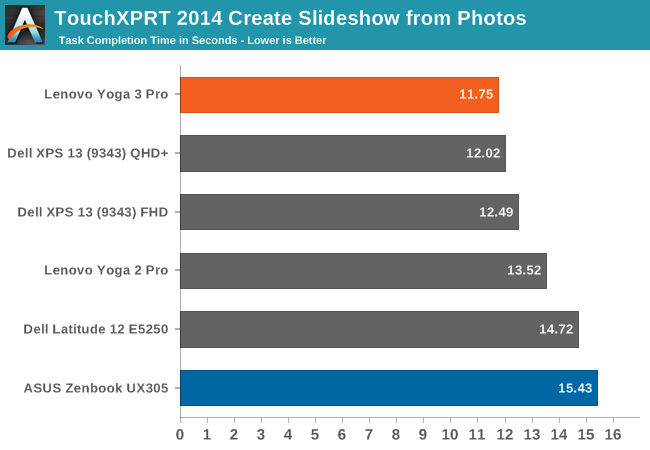 TouchXPRT is a Windows Store benchmark which performs several common tasks that someone at home may perform. All of the benchmarks result in a time to complete a task, which is then converted into an overall score. Here the UX305 plummets to the bottom of the charts, owing once again to its relatively low boost clock, scoring the lowest overall score of any device we have tested. The Yoga 3 Pro on the other hand with Core M 5Y71 and a 2.9 GHz boost clock has the highest overall score of any of the Ultrabooks in the chart. Once again we see a very different result from the previous test. 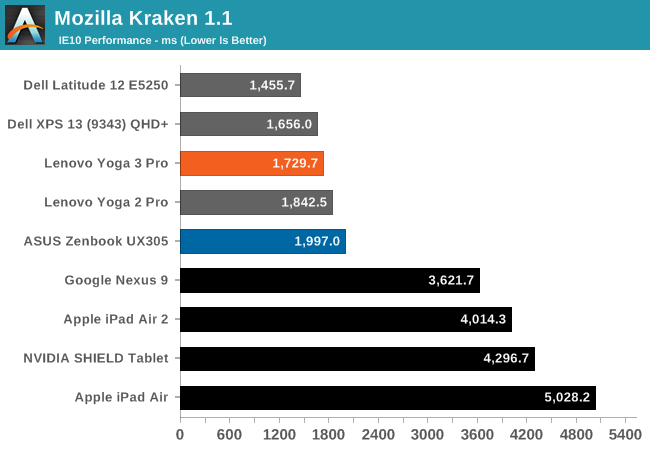 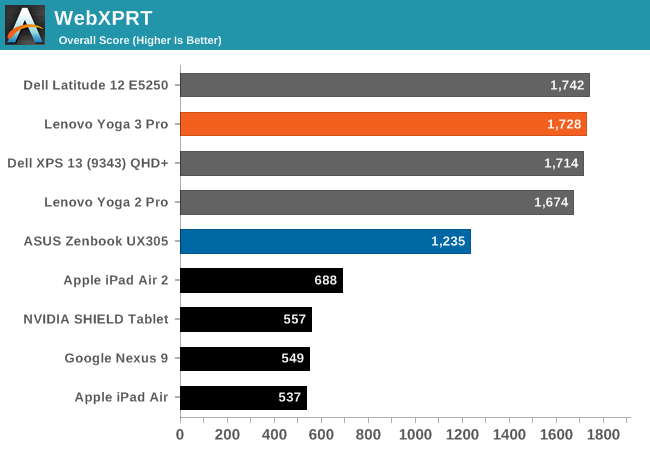 Running Javascript based browser benchmarks, the UX305 with Core M 5Y10 once again falls to the bottom of the chart. With just a 2 GHz boost clock, the 5Y10 struggles to compete against the likes of other laptops with faster Core M or U series processors. The ASUS UX305 cannot be converted into a tablet, but I have included some tablet benchmarks here just to show how Core M-5Y10 compares against the best performing tablets. With around the same power envelope, even the slowest Core M is still significantly faster than any tablet in CPU performance.

On system performance, we have seen some fairly wild swings when comparing the UX305 with the slowest Core M processor available to other devices, especially the Yoga 3 Pro which has the fastest Core M released so far with the 5Y71. The Yoga 3 Pro even includes a fan, whereas the UX305 is passively cooled. On quick, burst benchmarks such as TouchXPRT, and on single-threaded benchmarks such as Cinebench, and even on the web tests the Yoga 3 Pro with 5Y71 offers a lot more performance. However on the longer benchmarks the UX305 pulls ahead despite the lower base and boost clock speeds.

Traditionally, it was just a given that higher numbered processors of the same processor family would give you better performance, but with the kind of devices Core M is being integrated into, that is not the case at all. There are a lot more factors at play when you look at Core M as a whole in order to understand where the performance level is going to be. For example, ASUS has opted to allow the processor to get much hotter, which then translates to higher surface temperatures on the device, especially since it is passively cooled. But this lets Core M keep its clock speeds higher when performing extended workloads. Lenovo on the other hand, even with a fan, has opted to keep the CPU temperature much lower, but that forces the CPU to throttle down under extended workloads. On a long test, the ASUS CPU hit as high as 80°C, but the Lenovo kept the CPU to around 60°C, and due to the fan, the surface temps of the laptop did not get warm very much at all.

The performance of Core M is much more akin to how a smartphone or tablet is limited in performance, where the manufacturer has to look at overall device temperatures and decide where they want to limit performance. ASUS has chosen a much more aggressive temperature, and it does not affect the device use very much because it is a laptop, and therefore can be used on a desk. You do not have to hold the device, so even though it can get to over 47°C (117°F) between the display and the top of the keyboard, the palm rests and keyboard never get warm at all. The aluminum chassis comes into play and can act as a large heat sink. Lenovo has chosen a much lower device temperature, but the Yoga 3 Pro is a convertible and can be used as a tablet, so having such a high surface temperature would be a big issue. Of course, if you are using the UX305 in your lap, it would be very uncomfortable as well, so watch out for that. For general tasks, the device does not get warm, but if you are doing extended heavy workloads, it can be an issue.

One such task which causes heavy use for extended times is gaming, so next up is GPU performance.