When we said that the i850E was no different from its predecessor, we meant it. The chipset does not boast official support for Rambus' latest PC1066 RDRAM either. This is another situation where Intel won't boast official support for the standard but the memory will work on virtually all i850E boards and even some i850 boards. The limiting factor here is memory (most newer Samsung PC800 RIMMs work at PC1066 speeds, and of course all PC1066 modules work fine) and the clock generator on the motherboards themselves.

The ASUS P4T-E and ABIT TH7-II were some of the first i850 boards that started shipping with the proper clock generator for PC1066 RDRAM operation.

Why is PC1066 RDRAM so important? When you move to a 133MHz quad-pumped FSB the amount of FSB bandwidth between the i850 MCH and the Pentium 4 increases from 3.2GB/s to 4.26GB/s. Since the fastest supported memory type of the i850E is PC800 RDRAM, by default the i850E reduces the RDRAM clock multiplier from 4x FSB frequency to 3x FSB frequency to keep the RDRAM clock at 400MHz (for PC800 RDRAM). This keeps the amount of bandwidth between the MCH and the RDRAM banks stuck at 3.2GB/s in spite of the fact that the FSB bandwidth has increased by 33%. You are then in fact, widening one end of a pipe but leaving the other end untouched and expecting a gain in throughput. It's the FSB/memory bandwidth balance that made the i850 perfect for the Pentium 4 and it's that very same balance that's disrupted unless you use PC1066 RDRAM.

In order to understand what sort of performance benefits you should expect you have to understand exactly what's happening when you do open one or both ends of this pipe. The end goal is the same, to help the rest of the system keep up with the CPU. The Pentium 4 is now running at 2.53GHz and that is significantly faster than the rest of the system. The slower the rest of the system is in comparison to the CPU, the more of the CPU's power is wasted. It's the equivalent of taking a Ferrari through bumper to bumper traffic, you're not taking full advantage of its horsepower or torque if you're just creeping forward every few minutes.

Clock speed should be the most obvious influence on system bandwidth demands; if all things are kept the same, the faster a CPU runs, the faster it needs to be fed data to avoid wasting precious clock cycles and execution resources.

The next thing to keep in mind is that as applications become more demanding, with more features and larger working datasets they begin to eat up more of that precious FSB/memory bandwidth. Making a processor run Word is one thing, but making it handle all of the physics & artificial intelligence calculations for the next-generation of 3D games can easily become a hog of bandwidth.

And finally there is the issue of changing CPU architectures. While this won't apply to the Pentium 4 anytime soon, if the architecture of the processor changes at all then its bandwidth demands could change as well. Introducing faster (or more) execution units or higher bandwidth caches among other things can all change demand on system bandwidth. 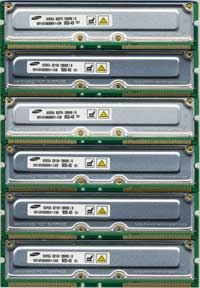 In the end, PC1066 RDRAM isn't necessary today but it will be in the future. Your best bet is to try and find some good PC800 modules that will work at 1066 speeds. Intel provided us with a few sticks that work at PC1066 but we were also able to purchase them online very easily through sites like Googlegear.